Beats Music CEO Luke Wood told us last October to soon expect a brand new subscription music service, one not only making a difference to how we consume songs but also changing our perception of what streaming music services should be all about. Yesterday, Beats Music announced it will be definitely opening for business on January 21.

In an effort to drum up excitement ahead of the impending launch, the headphone manufacturer likened existing music service to “servers” that provide little more than access to a catalog.

But how the heck does Beats Music expect to stand out in the crowded space of streaming service? By curating music from trusted human sources like established industry magazines, that’s how. They even hired professional DJs! “In our experience it’s always been a living, breathing human who has brought us that song we fell in love with,” the company said.

What’s in it for you? More than meets the eye. Read on…

Their “trusted human sources” include Pitchfork, Rolling Stone, Grand Ole Opry, Downbeat, DJ Mag, Hot 97/Power 106, Naxos and many others, as well as a bunch of well-known DJs, radio programmers and “our personal heroes across the genres.”

Beats’ celeb execs include President Luke Wood and Chairman Jimmy Lovine who both were pushing for subscription music services since the 1990s, and Chief Creative Officer Trent Reznor who really needs no introduction.

Lovine, a music mogul, in particular spent years trying to convince Steve Jobs to do a subscription-based music service. 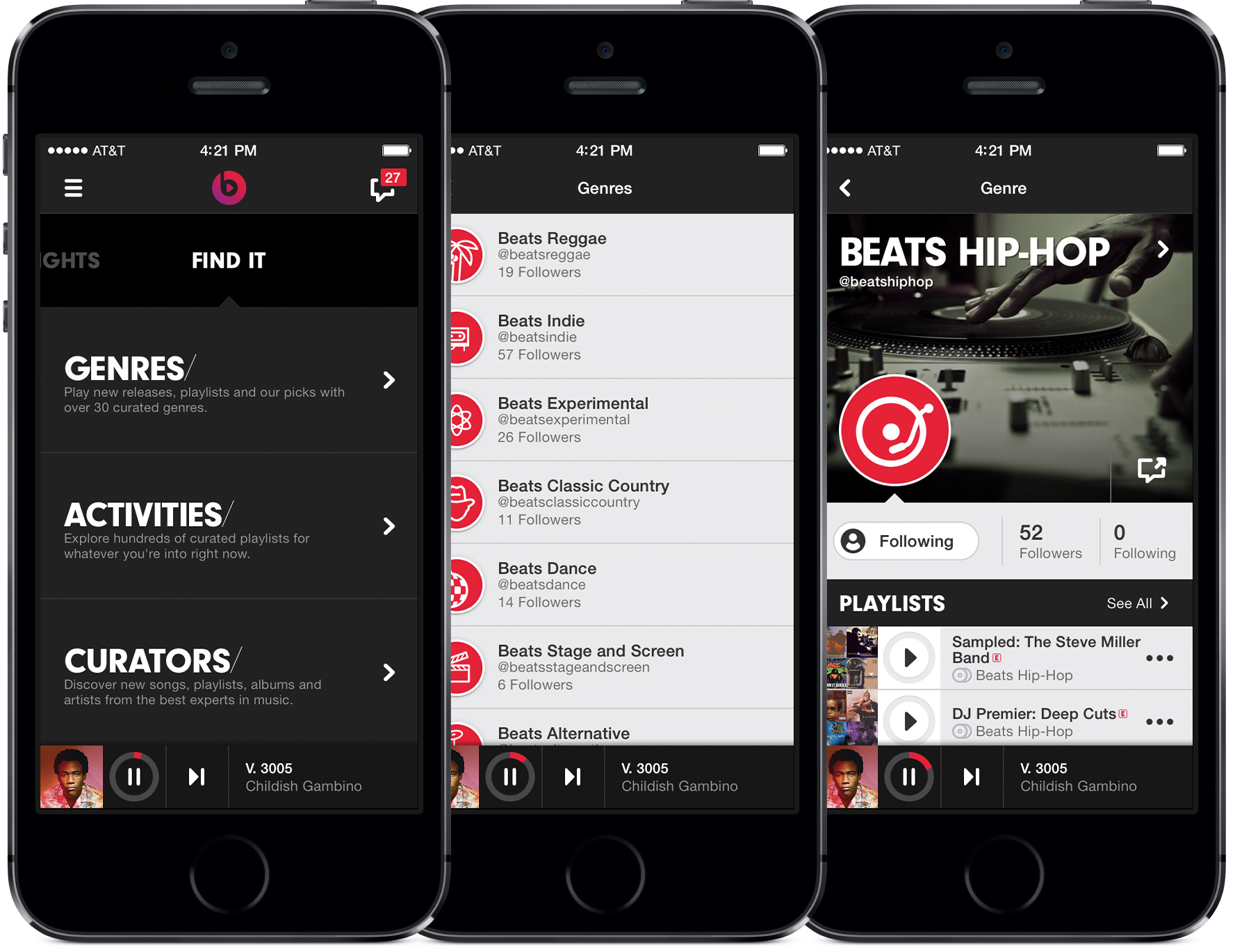 Radio programmers’ picks are available in the Highlights section.

The San Francisco headquartered company will feature human-curated playlists based on a particular artist, activity or the general mood of the listener, resulting in “music that’s always right for you”.

A great DJ picks the right song and knows the only thing more important than the song playing right now is the song that comes next. A great DJ gets bored before you do and knows when to switch gears to keep you listening.

To achieve its proposition of the right music at the right time, the service will of course use clever personalization algorithms, but it’ll be more than that because “a handful of stations can’t satisfy all listeners”.

We built the intuition that takes these human curated playlists and hand-selected songs and albums and delivers you the right ones for you based on your taste.

We made it simple so all you need to do is open the app and hit play to hear something excellent you’re likely to dig.

The way it’s going to work, you’ll tell the app where you are, what you feel like doing, who you’re with, and what kind of music you’re looking to hear and the app will try its best to deliver an endless playlist for your context.

Beats Music will of course allow listeners to create their own playlists, download albums for offline listening, search across friends and their playlists and more.

It’s an interesting concept, but we’ll reserve our judgement until we run Beats Music through its paces. Can Beats Music take on the likes of Rdio, iTunes Radio, Pandora, Spotify, iHeartRadio and the likes?

It’s too early to tell, but they certainly have the brand power so it’ll be interesting seeing how the competition goes. According to The New York Times, the company is planning to “exploit the power of its headphone brand through aggressive marketing”. 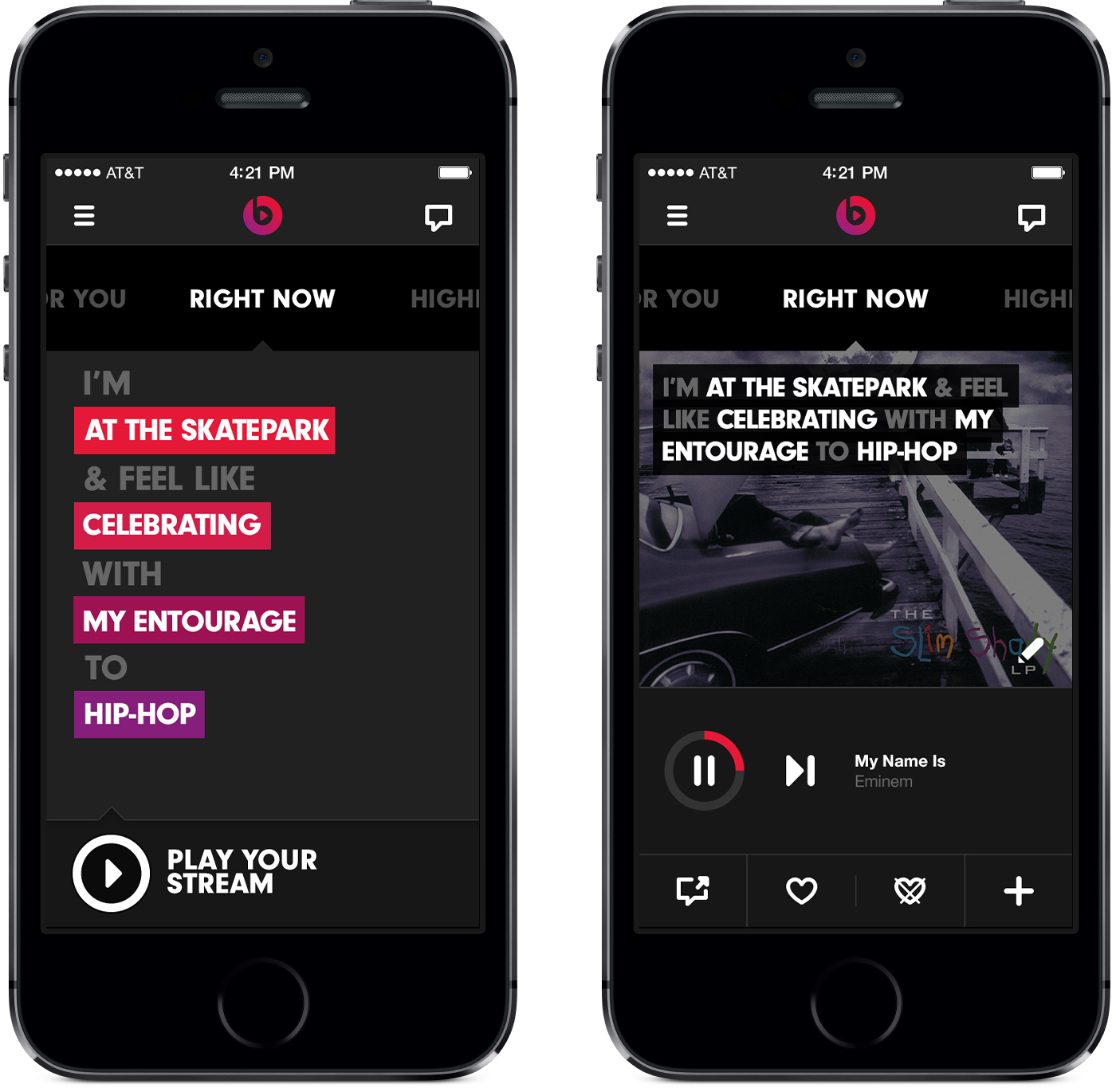 According to the yesterday’s blog post, they teamed up with AT&T so if you’re a customer Beats will give your family — up to five people and ten devices — all the music you can eat in exchange for just $14.99 a month, normally a $50 a month value.

Unlimited streaming for individual accounts from a catalog of over 20 million songs will set you back $9.99 a month and there’ll be a free tier to sample Beats Music without restrictions.

The initially U.S.-only service will be launching January 21 on the web, iOS, Android and Windows Phone, with a native Windows 8 app coming at a later stage.

Apple CEO Tim Cook met with Beats CEO in March 2012 to make sure the music service would not spoil Apple’s then-upcoming iTunes Radio.

Do you think Beats Music could pull you away from Spotify?