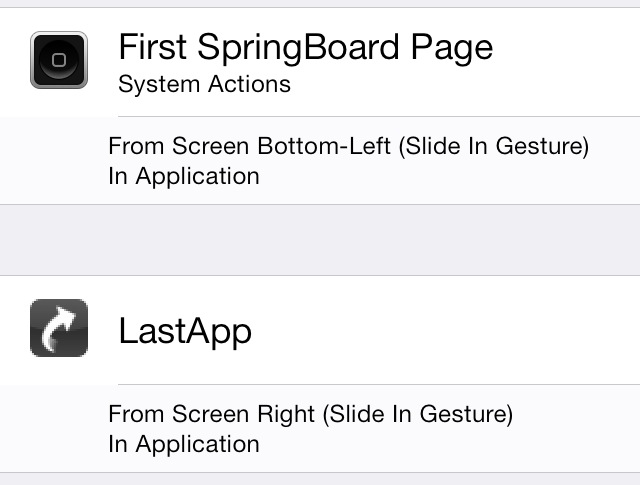 Zephyr is, with BiteSMS, one of my must-have jailbreak tweaks for iPhone. While BiteSMS has started making its way to devices on iOS 7 for a few weeks now, Zephyr is still nowhere to be found.

In fact, after chatting with Zephyr developer Grant Paul (aka chpwn), I was told that there were no plans at this time to update the tweak for iOS 7. So I decided to make the best I could with what I have: Activator by Ryan Petrich…

This workaround doesn’t aim to exactly replicate the functionalities of Zephyr, but it is indeed the best I could come up with. Obviously, your mileage may vary. As a matter of fact, you might even get a better mileage than me by tweaking the settings of Activator to your liking.

Veteran jailbreakers won’t learn anything from this post, so before jumping to the comment section and tell us you already knew about all this, please consider skipping this post altogether.

There are two things I really miss from Zephyr. The first one is how you can flick the screen up to close an app you’re in, mimicking what the Home button does. The second one is how you can switch between applications by sliding your finger in from left or right of the screen.

How to use Activator to close applications

The Home button is a great invention. I like to have one button to rule them all, but it sometimes frustrates me to see that Apple isn’t taking full advantage of multitouch gestures the way it could. My single favorite feature of Zephyr was how you could flick your finger up from below the screen to close an application you were in. Thankfully, Activator allows you to somewhat replicate this, even though Control Center can sometimes get in the way.

Here is the gesture and action I have set up in Activator to replicate this feature of Zephyr: Go to Activator > In Application > Slide in Gesture > From Screen Bottom-Left > First SpringBoard Page.

You might have noticed that I used the “First SpringBoard Page” action instead of the Home Button action. The reason is that I can’t get the Home Button action to work with this specific gesture. I brought this up to Ryan Petrich‘s attention, and that’s hopefully something he will fix in the future.

I use the From Screen Bottom-Left gesture so that I can still get to use Control Center from the right side of the screen.

This gesture/action combo works fairly well, although I sometimes accidentally pull up Control Center, or don’t perform the gesture the right way, resulting in no action at all. It takes a few minutes to get used to it, but once you get it running, it really feels like a natural gesture to close applications.

How to use Activator to switch to the previously used app

You may remember how Zephyr would let you switch from an app to a previously used one, simply by flicking in from the left of the screen to the right, and vice versa. This gesture was especially useful when switching back and forth between two applications.

You can’t exactly replicate this with Activator, but you can certainly add an extension that will help you switch between two apps. To do so, you have to install the LastApp extension from Cydia, which was recently updated for iOS 7 and iPhone 5s.

After installing LastApp, go to Activator and set up the following gesture and action: Activator > In Application > Slide in Gesture > From Screen Right > LastApp.

Now anytime you’re in an application and you want to switch to the previously used one, simply slide your finger from outside the right side of the screen onto the screen, and your last used app will show up. Do this gesture again to go back to the first app.

Activator really is a powerful tweak with virtually endless possibilities. I have found that some of the gestures/actions don’t always work well, or sometimes at all, but for the most part, it is a solid option when it comes to using gestures to assign various actions.

What I described above is something that works well for my specific workflow, but it doesn’t mean you should replicate exactly what I did there. You’re obviously free to customize this to your liking and come up with your own workflow.

Zephyr, for example, also allowed you to invoke the app switcher. That is something that I did not try to replicate with Activator, but it could be fairly easy. A swipe up gesture from the bottom right of the screen could definitely be a good trick for that purpose. Again, it’s all up to what you’re trying to accomplish.

I’d be curious to hear about some of your gestures/actions. Please make sure to share them in the comment section below.