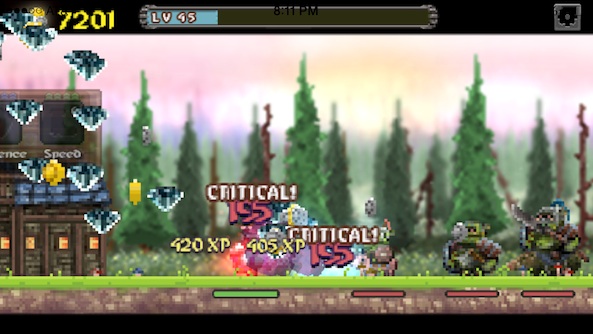 I am a former World of Warcraft gamer. Technically, I’m a current player. I just haven’t logged in for a while. I know how monotonous grinding can be. Kill 10 of these to earn this token. Skin 20 of these to get another reward. Sometimes, you just want to loot without having to waste time killing mobs, one-by-one.

This is a side-scrolling pixelated adventure game with goblins, orcs, and Dragons. Players control the heroic knight as he pursues his quest to kill the legendary dragons of his realm. When you kill something, you will earn coins and potions. Coins are used to upgrade your knight’s stats. Potions are used to give him temporary boosts or replenish his health.

There are five different worlds with different themes and characters. Fight orcs and goblins in the Woods, Ratmen in the Desert, undead armies in the Jungle, snow trolls in the Snowy Plains, and the dragon clan in the Volcano. The fearsome dragon is at the end of the fifth world.

Once you’ve slain the first dragon at the end of the fifth world, you will be upgraded. The enemies will become harder to kill, but they will also offer more loot. Ridiculous amounts of loot. 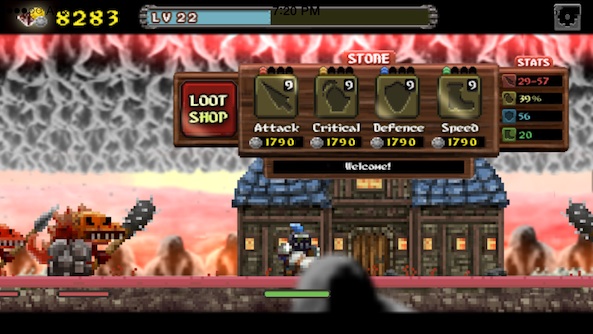 The only thing you have to do to fight in this game is touch the left or right side of the screen. Touch the right side to move forward and touch the left side to go back. When you approach an enemy, you will automatically attack it, so you won’t have to trigger any special abilities, focus any spells, or aim any arrows. Just run. There will be hordes of bad guys, but if you keep upgrading your stats, you will be able to plow through them like a lawn mower through summer grass.

To keep your stats high, you should pay to upgrade them regularly. You will earn gold for each enemy you kill. Every few seconds in the game, a store will appear where you can buy stats upgrades. Use that gold to purchase incremental increases to your attack, critical hit chance, defense, and speed. There are four tiers of upgrades, each with nine levels. Once you’ve mastered all upgrades, your stats will continue to increase, but you won’t see a change in the tier or level (or cost).

There appears to be an issue where your character gets so fast that he is no longer viewable on the screen. This makes him very difficult to control and causes you to die a lot at higher difficulty levels. I recommend leveling your speed stats significantly less often than the rest of them. At least four levels lower than what the rest of your stats are at. Only increase your speed as you feel you can keep up with the attacks.

Enemies replenish infinitely, so you can go back and kill monsters over and over and over until you’ve earned enough loot to upgrade your knight. Don’t spend too much time on any one level though. Once you kill the dragon, rewards will be greater and it will be easier to earn enough gold to pay for your costly upgrades. I’d suggest messing around until you’ve upgraded about two levels, at least, on your stats. That way, you stay ahead of your enemies and can kill them easily without suffering too much damage.

If you do die, all you have to do is tap to revive your knight and he will respawn at the last store he passed. You will lose gold and experience points when you die, but it is very easy to earn more, as long as you keep upgrading.

If you find yourself dying too often on a level, replay earlier ones in order to earn gold and upgrade before trying the harder levels.

Whenever you kill a dragon, the next five difficulty levels will be unlocked. You can’t go back and play previous difficulties. But, you can play and replay any of the five worlds in the current tier as much as you like until you kill the dragon.

As you play the game, you will unlock achievements and collect bad guys. The monsters are saved in your Beastiary so you can track how many of each type you have killed in the game so far. In the Achievements section, you can see what you’ve accomplished, and what is next on your list.

The key to wining is to constantly be upgrading your stats whenever you have enough gold to do so. Keep your speed a bit lower than the rest of your stats so you don’t lose control of your knight and send him quickly to his death before you can see what he is doing. Keep playing until you’ve completed all of the achievements to win the game. 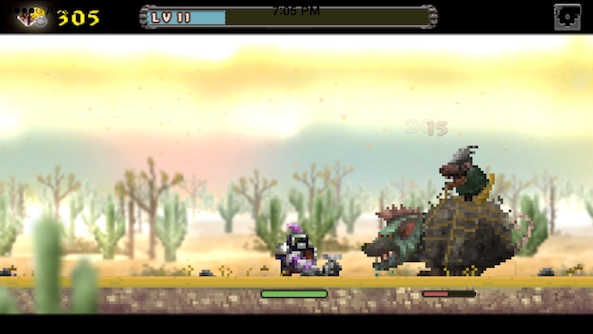 I was not particularly impressed with this game at first. It seemed too easy. However, after killing the dragon for a third time, the game became more interesting because it was harder to kill bad guys. Keeping my stats up became such a priority that I had a hard time putting the game down. I made it to level 50 with my knight and difficulty tier 26-30 in about an hour.

This game really is too easy. It is fun to earn loot and level your character, but there is zero effort required on the player’s part. You literally just hold down your finger while you kill dozens of bad guys with just a poke. It is fun to play for an hour, but I don’t see myself picking it up again after today.

Loot Hero costs $0.99. While the price is definitely low, the lowest you can get without being free, it is a stretch to say it is a good buy. You will probably only get about an hour’s worth of fun out of it before the game gets too repetitive (less than an hour for some). There is a small amount of replay value because you may want to change the way you increase your knight’s stats in another game, but the mechanic are the same throughout.

There is a part of me that wants to say, just download this game. It’s fun. You pay about a buck for a candy bar and this game will last longer than that. However, I know that iOS game players can be pretty stingy with their dollars and are used to getting more for their buck than what this game has to offer. My best recommendation is, if this game looks appealing to you, think of your dollar as going to an independent game developer. This game is available on the iPhone, iPad, and iPod touch. Download it in the App Store today.

Do you like the looting part of RPG grinding? Do you think you will try this game?