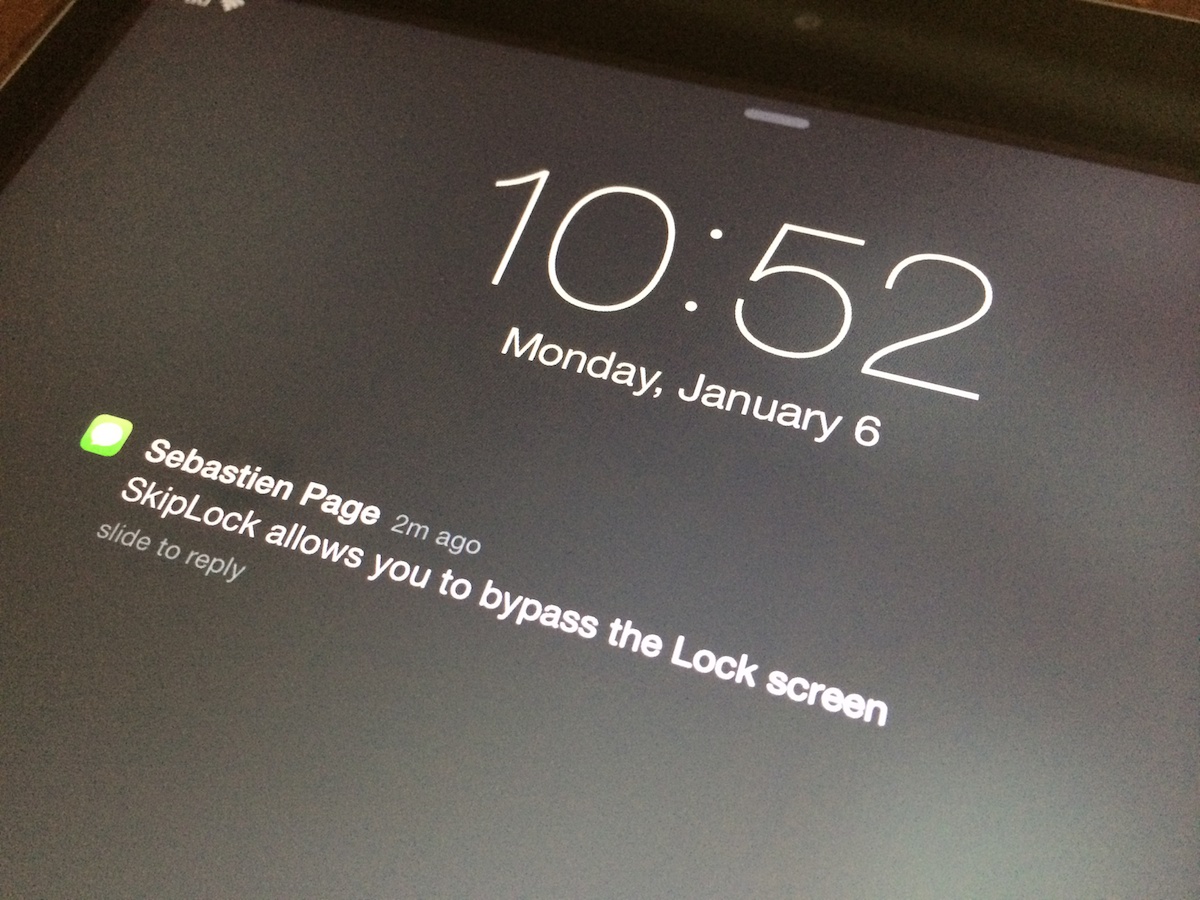 Regular iDB readers may remember a tweak we talked about last year called SkipLock. SkipLock is a simple tweak that allows you to bypass the Lock screen of your device, unless it is password protected, or unless there is a pending notification on the screen, in which case, you will still have to slide to unlock your device.

An original idea by yours truly, and developed by famous jailbreak dev Filippo Bigarella, the tweak was only available on Filippo’s repo and never made it to the public.

iOS 7 broke SkipLock so I asked Filippo if he could do something about it. A few minutes later, he came back to me with a .deb file which I quickly installed on my iPad mini, and it worked just as advertised. The good news is that SkipLock is now available on Cydia…

Some people may wonder why you’d want to bypass the Lock screen of your iOS device, so let me share with you why this tweak is very useful to me.

My iPad mini sits on my coffee table all day. I take it with me when I go on weekend or vacation somewhere, but other than that, it is a home device that barely makes it farther than the couch seats. When I use my iPad mini, unlocking the Lock screen is just an extra step that I find completely unnecessary.

Because I have little to do with the Lock screen, SkipLock allows me to go faster where I want to go, which in most cases is either Reeder or Twitter.

Again, you will not be taken directly to the Home screen if there is a pending notification on your Lock screen, such as a Message.

It’s important to note that if your device is password protected, SkipLock will not bypass the Lock screen. Same applies if you use Touch ID to unlock your iPhone 5s.

As we mentioned before, SkipLock is not for everyone, but if like me, you’re looking for a way to skip the Lock screen when there is no pending notification, this tweak should do the trick. I am well aware that you can kind of do this with Activator, but it is not as straighforward.

Now for those wondering, Filippo didn’t get too carried away from his work on Springtomize 3 to update SkipLock. It is my understanding that it only took him a few minutes to update SkipLock. He got so familiar with the SpringBoard that he knew by heart the functions he had to use to update the tweak for iOS 7.

SkipLock is available on BigBoss repo for free.