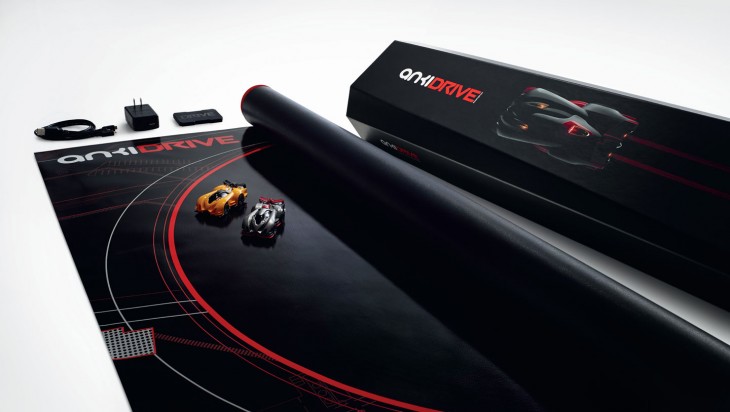 Folks who received the Anki Drive for Christmas this year will be happy to hear that the companion app has received a major update today. The new version, which is marked as version 2.1.0, adds an expanded upgrade system, new weapons and much more.

The new weapons include an EMP gun, which lets you shoot other cars as they race along the track, and the new support items include reverse drive, horn and kinetic brake. The update also features other improvements, such as smarter AI and faster upgrades…

• EXPANDED UPGRADE SYSTEMS
Enter the Garage and customize the new Combat, Chassis, Engine, and Energy Systems. Choose your path, buy & sell upgrades, and level up!
• NEW WEAPONS AND SUPPORT ITEMS
Arm yourself with the all new EMP, Reverse Drive, Horn, and Kinetic Brake. Remember: swipe left & right on the triggers during gameplay to switch weapons.
• THE ARMORY HAS MOVED
Each vehicle now has it’s own set of Weapons and Support Items. Configure them via the Armory in the Garage.
• EARN BOUNTIES
Earn greater rewards for defeating stronger opponents. The higher a vehicle’s Level, the more bounty you earn for defeating it!
• VEHICLE SOFTWARE UPDATES
Once updated, vehicles can use the new Upgrade Systems. All existing purchases have been refunded, and you’ll get even more points for each vehicle you update in the Garage.
• SMARTER AI
Think you can beat the AI on hard? We sure don’t… especially with our recent improvements. It’s smarter than ever. Think you’ve got what it takes?
• IMPROVEMENTS THROUGHOUT THE GAME
Enhancements and fixes make it even more fun to play.

And here’s a video showing the Anki cars in action:

For those unfamiliar with the accessory, Anki Drive was first introduced on stage at Apple’s WWDC event last summer. Using a mix of clever software and tiny cameras, the cars steer themselves. But players control the gas and onboard guns using the app to score points.

The Anki Drive Starter Kit, which includes two cars and the race track, can be purchased from the Apple Store for $200. It’s fairly expensive, but it currently has a 4.5 star rating on over 60 user reviews. The app, also called Anki Drive, is available in the App Store for free.