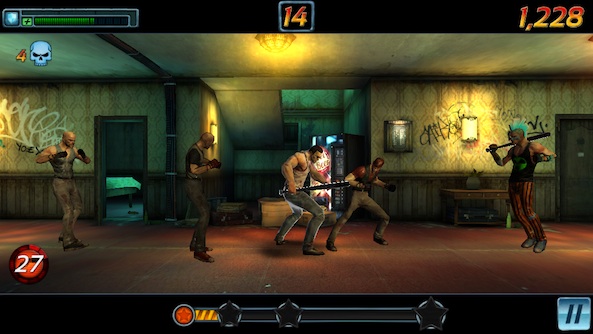 Most gamers have played Street Fighter. Even if you weren’t born until after arcades went the way of the dinosaur, the classic fighting game has been ported to so many gaming consoles that it is nearly impossible to avoid. Street Fighter spawned decades of fighting games that, to this day, still include the same basic mechanics.

Fightback is a fighting game that features the tried-and-true punch/kick combos of our youth, but also adds a few fun aspects to make your street brawling adventure just a little cooler…

This game is a side-scrolling fighter that uses tap and swipe controls to let you punch, kick, and evade the enemy. Rack up additional points for combo moves and use your gun to hit targets faster.

Players control a bruiser of a guy who looks like he walked out of a 1980s action flick. Our protagonist, Jack, is on a mission to save his sister, even if it means beating the snot out of thousands of guys who get in his way.

Each level opens with a second or two of cinematic movement where you get to see your muscleman close up. Then, the view switches to side-scroll and the action begins.

The backgrounds are based on the various buildings you are in. Players start out in Cell Block B, where the fight begins. Battle against a handful of thugs in Cell Block B to learn the controls, and then head over to the Horror House to try to catch up with Jack’s sister’s kidnapper.

Horror House is 11 stories tall. Each floor has a different set of gangsters to beat. Once you get to the tower, your missions are timed. According to the plotline, a bomb is set to go off after a specific amount of time. If you don’t beat up the bad guys fast enough, you’ll get blown to bits. Once you’ve completed Horror House, book it to The Big House to try to defeat the kingpin in his own turf. Once you get through pummeling everyone in Southside, head to Bayside for some more action. You can also head Downtown to fight on the streets against thugs in Endless mode.

In between fights, you will be in contact with a few non-player characters who will tell you when you need to buy more ammo, or let you know when you’ve earned enough money to upgrade your gear.

With the money you earn beating up bad guys, you can purchase bulletproof vests, bigger guns, and even new tattoos for extra power. Some levels require that you are equipped with certain items before entering. 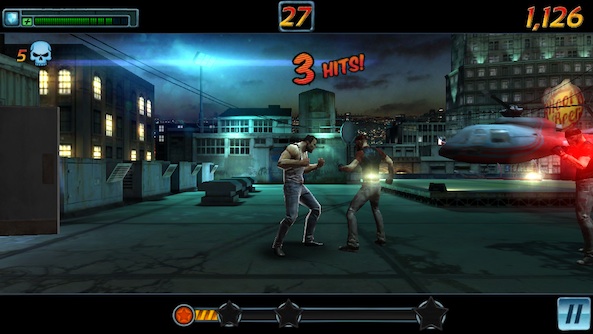 Just like a good old-fashioned beat-em-up game, players punch and kick their way through dozens of bad guys. Tap to punch and swipe to kick. You can also equip and use your gun, but you don’t have a whole lot of ammo, so sticking with melee attacks is the best option in most situations.

Tap the right side of the screen to hit enemies in front of you. Tap the left side to attack those from behind. Swipe upward to perform a high kick. Swipe and tap to hit for double damage. Drag your finger in a circular motion to execute a roundhouse kick.

Each hit rewards a certain number of points. Combos offer higher rewards. You can also earn points for successful evasion maneuvers. To avoid getting hit, swipe downward when an enemy attacks. You can also attack from below while still in the evade position.

Players have access to weapons like shotguns, assault rifles, and RPGS. Of course bullets don’t come free in this game. In fact you don’t get very many at all, and they are fairly expensive. The best occasion to use your gun is when an enemy is particularly standoffish and you can’t reach him.

Players can’t move Jack forward. He can only hit, kick, or evade. So, if an enemy keeps backing away from the fight, his distance wastes important seconds that are needed to get to the end before the bomb explodes. Pop a cap in a bad guy if he is unwilling to take his licks.

This game is free to play and is limited by the stamina timeout mechanics. I was able to get about a half hour’s worth of gameplay before I had to wait for a stamina regen. It only takes about an hour (maybe less, I wasn’t paying that much attention to the time) to refill your stamina bar and hit the streets again. However, I can see this mechanic being a major turnoff for some people, especially if, like other timeout games, it takes longer to refill your stamina as you get higher in levels.

The game offers a multitude of ways to earn in-game cash, so you will never feel obligated to purchase an item in order to progress. However, stamina refills cost gold, which is much harder to come by. So, if you are an impatient gamer, you may feel the sting of buying in-game gold in order to keep playing. 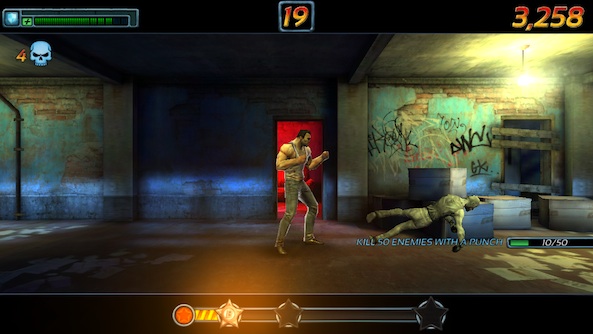 This game is a ton of fun and has great graphics. The fighting mechanics are simple, but give you the chance to work on combo moves for extra points. You can replay levels for extra cash, and endless mode lets you hone your fighting skills, while earning a bit of money, too.

This is a free-to-play game, which obviously means that the company hopes to make money off of you some other way. In this game, the stamina meter refill is their golden calf. You can only get about a half hour’s worth of gameplay before having to set the game down or pay for more play.

Fightback is free to play. Like I mentioned above, that doesn’t mean you won’t be paying for it. The key is patience. I’ve successfully played dozens of games with the timeout method without paying a dime for it. The only frustration is that, as soon as you feel like you are hitting your stride, you have to stop.

Because it doesn’t cost any money to download the game, I suggest anyone who likes fighting games similar to Double Dragon should grab it. Even if you don’t play much after owning it for a week, at least you’ll get to relive your enjoyment of old-school beat-em-up games. This game is available on the iPhone, iPad, and iPod touch. Download it in the App Store today.

Street Fighter is the fighting game that started it all. This game lets you pick up weapons that enemies drop, like in Double Dragon.