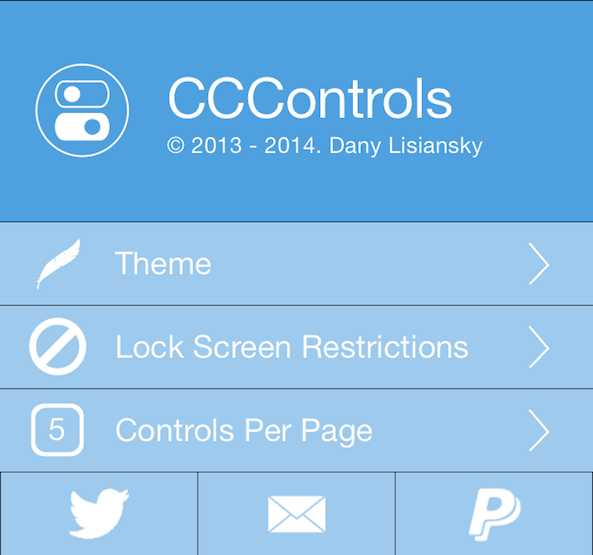 CCControls is a new jailbreak tweak that takes Control Center toggle customization to the next level. Have a look at our full video walkthrough, which appears after the fold, to see what I mean.

CCControls features a nice array of options, but it primarily focuses on customizing the shortcut toggles that appear at the top of the Control Center menu overlay. These toggles can be customized by means of the FlipSwitch framework, which adds a ton of additional toggles to the mix, along with the ability to quickly rearrange, reorder, and disable specific toggles. All of this can be performed on the fly, in real time, and the changes take place immediately without the need to respring.

The best part of CCControls is its preference panel. Earlier, I stated that CCControls was one of the best jailbreak tweaks that I’ve ever reviewed, and this is why. Developer, Dany Lisiansky, went above and beyond the call of duty when designing the preferences for this tweak. If you listened to the last episode of Let’s Talk Jailbreak, you probably heard me rave about a tweak that I was beta testing, and CCControls is that tweak.

The preferences for CCControls are just ridiculously well-thought out and well-designed. Usually, the preferences for jailbreak tweaks and apps seem like mere afterthoughts, only added because of necessity. CCControl’s preferences seem like the primary portion of the tweak, the part most concentrated on when bringing the tweak to fruition. Lisiansky actually verified that this was true in a conversation I had with him. 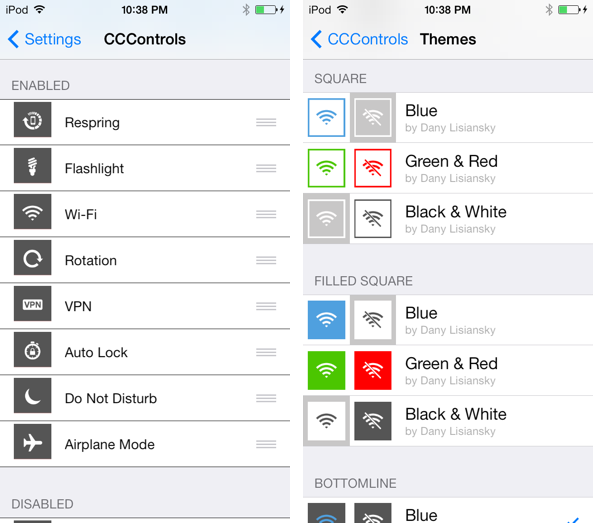 CCControls features a few built in themes that can be enabled directly from the tweak, no WinterBoard or third party theming controls necessary. Each of the themes, iOS 7, Filled Circle, Square, Filled Square, and Bottomline, are visually appealing. The cool thing about CCControls, is that when you switch a theme, the updated theme is then reflected throughout the tweak’s preferences. This is the type of attention to detail that’s not at all necessary, but again, it shows that the developer went the extra mile and actually cared enough to do so.

Lastly, you’ll find a section to restrict certain toggles from being used on the Lock screen, and a section for establishing paging preferences. All in all, CCControls doesn’t do anything groundbreaking that you’ve never seen before, but its presentation, design, and usability makes it one of the must have tweaks of the iOS 7 jailbreak’s young tenure. Better yet, CCControls is a free download on Cydia’s ModMyi repo.

If you’ve tried CCControls, I’m interested to hear what you think about the tweak. Were you as impressed with its preferences as I was, or do you think I’m overstating how good it is? Share your thoughts and impressions in the comments down below.