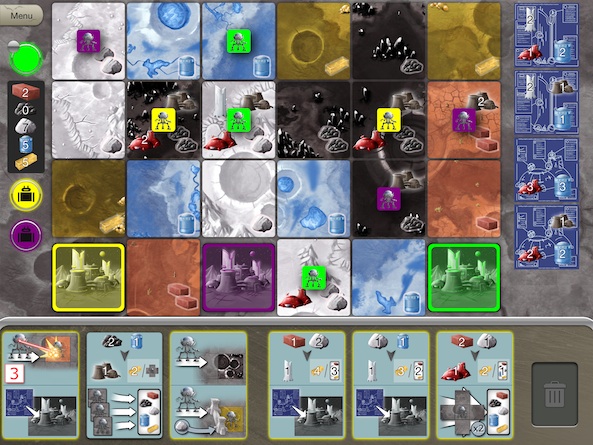 Leave it to a bunch of MIT guys to make their own board game. According to the email we received at iDB, a group of MIT graduates gets together every Labor Day weekend to play games and finally decided to create their own. Put a couple of brilliant minds in a room together and they could end world hunger… or make a board game.

Outpost Luna is the end result of years of playing and tweaking a city-building game set in outer space, and then turning it in to an iOS game…

Just like most board game apps, the center of the screen displays the board, while the sidelines show the secondary information, including the player area. In this game, you can’t see what your opponent has in his inventory or his playing hand. However, you can see what actions he is taking during his turn.

The board is made up of a grid of tiles. Each tile represents a different type of resource of rock, ore, brick, water, or gold. The landscape looks similar to an asteroid or moon, but the mined resources are the same as you would find in ancient Greece.

Your available resources are listed on the left side of the screen with colored circles next to it, representing player markers. The one with the gray dot next to it is the current player.

The city blueprints are on the right side of the screen. There will always be at least three blueprints, but there will sometimes be more. 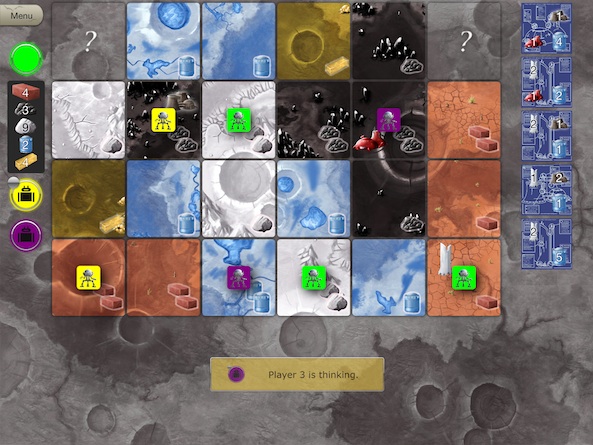 To win the game, be the first player to build three cities. That may sound easy, but it is harder than you think. Not only do you have to earn resources to build factories, towers, and residences, but you also have to keep an eye out for invading enemies who will steal your stuff.

On your first turn, you will begin by placing a “Move Unit” card. This will allow you to flip over and reveal the resource of one tile and then decide to either move a unit to the tile, or move it to another one.

If it is not the first turn, players start by moving a card from the hand, (interchangeable) section, to Spot #3. Each player has three action spots and three remainder cards. When you place a card in Spot #3, it means you will use it in three turns. So, every time you play, you must be thinking three moves ahead. Spot #1 is the only card that you can use to perform an action.

With the action cards, you can place or move a unit, produce resources, challenge another player to try to win their land, select a resource to tax, get a shipment from Earth, build buildings, including housing structures, towers, and factories, and finally, build a city.

If you decide to challenge another player, you will try to move one of your units to their tile and obtain what they have built so far. The card you use to challenge an opponent determines the base strength of your attack. You can also add gold to your attack to see if you beat your opponent’s defense. When you are defending from an attack, the gold you have previously allocated during your turn, plus any number of structures you already have on the tile will determine if you hold the line against your opponent.

Next, you will allocate gold to defend your unit if you have any. Gold is not spent to set up a defense, but it is kept on hand, just in case you need it to defend against an attack. For example, if you have seven gold in your inventory, you can allocate as much as seven gold to each unit on the board. They remain in your inventory and can be used to purchase structures. The allocation is simply to add a point increase to your armor stats.

Players can only have three units on the board at a time and can only build structures and cities on a tile where a unit exists. When you build a city, the unit goes back into your inventory and can be played on the board again later.

Through earning resources, building structures, and challenging or defending land, players try to be the first to build three cities. 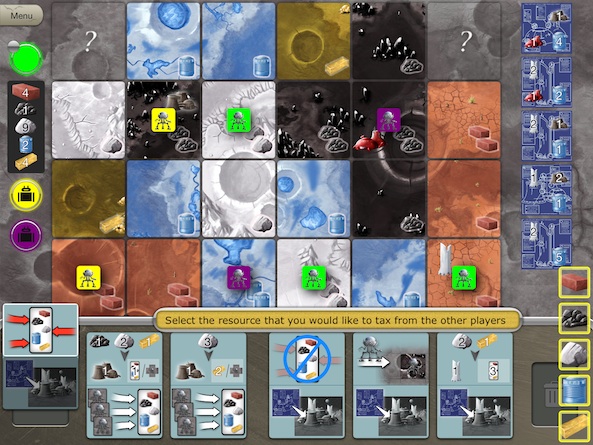 This game is very easy to understand. It is one of the simplest city-building games I’ve come across. There are very few alterations to the basic rules of the game, so even someone who doesn’t fully understand the genre can easily figure it out.

The computer-generated opponents are not particularly complex, but they still provide a relative challenge, so they aren’t too easy.

You can’t undo a move. If you place a card in Spot #3 on accident, you can’t fix that mistake.

The Challenge and Defend actions are difficult to understand. The game’s downloadable rulebook should be included in the app. After reading the rules online, I was able to better understand how to defend against attack.

Outpost Luna costs $2.99, which is relatively inexpensive for a board game app. This game is fairly simple and doesn’t feature a whole lot of expensive graphics or game mechanics, so it is priced right. Since you can play alone, against friends in the same room, or with others online through Game Center, the replay value is very high.

This is a fairly simple city-building game, which may be a turn off for experts at games like Settlers of Catan. It is better suited for new gamers in the genre, but can still be a fun title for a quick pick-up game in the afternoon. It takes less than an hour to get through a whole game. Download it in the App Store today.