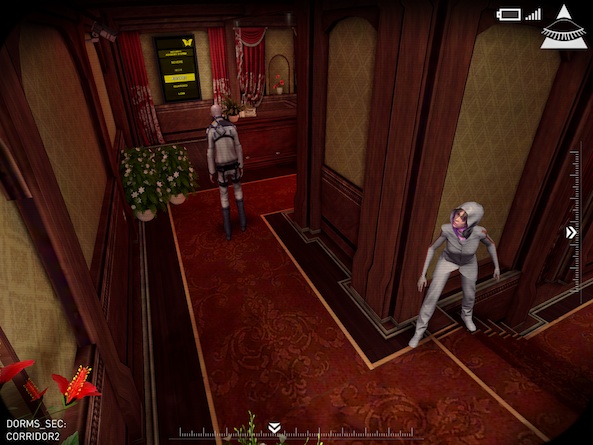 Until this past Thursday, I’d never heard of the “stealth” genre. At least, I didn’t think I had. It turns out, games like Metal Gear and Castle Wolfenstein are part of the stealth genre. I just didn’t know it had a name. I guess you are never too old to learn something new.

République is a stealth game that sprinkles in a bit of action with the hide-and-sneak mechanics. In this game, the protagonist’s only hope is to escape the oppressive control of the Headmaster and your job is to help her…

This is one of those new iOS games that push the limits of what mobile gaming can do. The graphics are stunning and the controls and movements are smooth. The characters’ features were designed using “Faceware Technology” to create eerily realistic expressions that plunge you deep into the Uncanny Valley.

The rooms are fully searchable with certain areas inaccessible until you’ve unlocked new skills. Additionally, some items are not usable until you’ve increased your computer hacking talents.

The game is huge. Players must travel from one section of a compound to the next, unlocking doors, hiding behind walls, and sneaking from room to room, looking for an escape.

One interesting feature is that the guards in the game are based on real life people who pledged to the game’s Kickstarter campaign. If you tap on “Clark,” his identification card will appear and you will see, a picture of the Kickstarter backer and some basic game-related information, including a game cartridge that I can only assume is based on the backer’s indicated preference. It is a very clever way of thanking backers for their contributions to the game. If it weren’t for the gamers who backed this project, it may not have been able to be made the way the developers wanted. I’m thankful for them, as well. 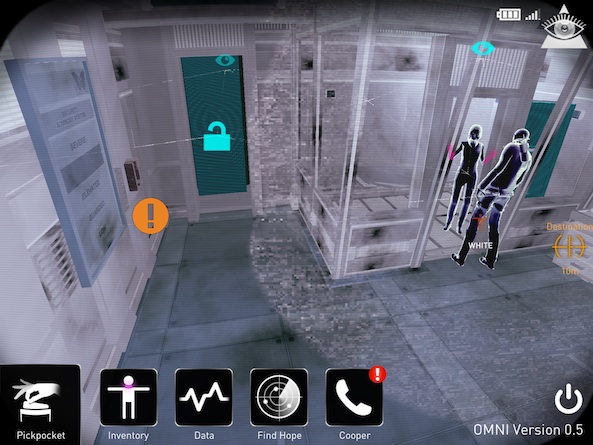 Players start by watching a few minutes of the cinematic story. Once locked into a cell, the game’s protagonist, Hope, asks you for help. She doesn’t know who you are or whether you can help her, but she is putting all of her trust in your ability to get her out of the compound before she is “Recalibrated.”

The game consists of two game mechanics. One is that you, as the controller of electronics in this compound, can switch to camera view and jump from one security camera to the next, keeping an eye out for what lies ahead. In this view, the camera will have thermal imaging, so you can locate guards and make sure to plan a path to help Hope avoid getting caught. Additionally, if there are any locked doors in this view, they will be highlighted in red so you will know to unlock them quickly. If they are above your skill level, a number will be displayed next to the red lock.

The other mechanic is where you direct Hope to different locations at specific moments so that she can time her movements. Tap a door and she will walk through it. Tap a wall and she will hide behind it.

As Hope moves from room to room, she will collect items that will help her escape. For example, she can grab canisters of pepper spray that she uses to debilitate guards if they discover her. In the security camera mode, you can also collect bits of information that move the plot forward. For example, you will collect newspaper clippings relating to a rebel that started a small revolution in the dystopian world that Hope exists in.

Players interact with the environment by controlling security cameras and moving from room to room, looking for paths. Then, control Hope by tapping a spot in a room to move her to. Be sure to time your movement well or a guard will notice her. If she gets caught, she can spray her captor with pepper spray to escape. If she doesn’t have any pepper spray, the guard will bring her back to a containment room and she’ll lose all of her items. She can get them back, but only by finding the guard who took her stuff and then debilitating him and pickpocketing him.

I’ve only completed about 10 percent of the first episode and I’m fully hooked. I can’t wait to find out what happens to Hope and whether she escapes her captors. What am I saying? Of course she will escape. I’ll be the one helping her. 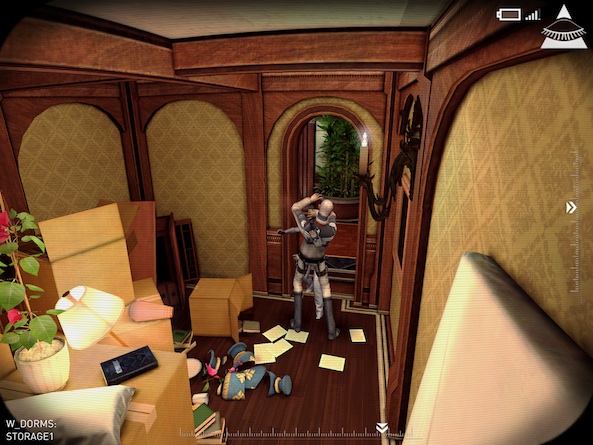 The graphics are fantastic on the iPad Air. The game plays smoothly and automatically saves after you move to a new room, so you’ll never lose your progress.

The plot is interesting and is based on the oppressive overseer stories like 1984 and Brave New World. If you like dystopian future stories, you’ll like this game.

I’m going to have to call this game a big winner. I can’t find anything wrong with it. I love it. No wonder Apple named it Editor’s Choice on the iPad this week.

The first episode of République costs $4.99. Like similar episodic games such as The Walking Dead: The Game and The Wolf Among Us, additional episodes will be made available for in-app purchase in the future. You can buy the entire season for $14.99, which will have five episodes in total. This is the average price for episodic games. The Season Pass discount gives you about five dollars of the overall cost. If you think you will play the whole season, it is worth the one-time price up front.

Fans of stealth games will thoroughly enjoy the anxiety inducing wait-to-move action. The unique dual modes of viewing and playing the game add an interesting element. This is the kind of game I love to see make it to iOS. It looks great and has a fascinating story. Download it in the App Store today.

Master Thief is a top-down simplified version of a stealth game. Splinter Cell Conviction is an action-packed stealth shooter game.