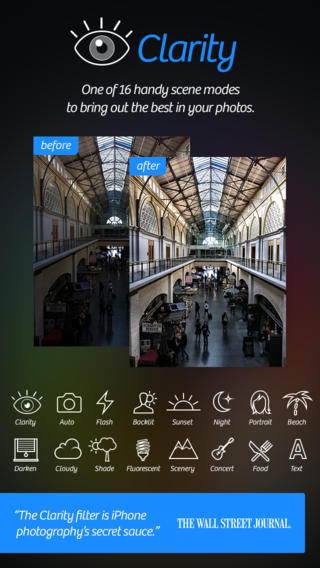 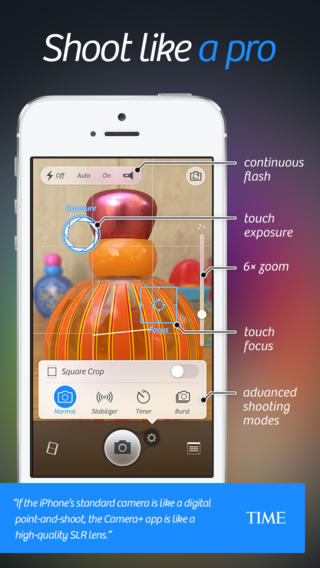 If you’re an iPhone photography fan and follow me here on iDownloadBlog, chances are you’ve by now figured out that Taptaptap‘s Camera+ is my go-to photography application for the iPhone and iPad.

After failing to jump on the initial iOS 7 app update bus, the team has finally pushed a major update for the iPhone and iPod touch edition that includes substantial iOS 7-makeover along with the flattened app icon and a bunch – and I really mean a bunch – of new tools and filters.

I love the ability to straighten my photos (finally!), apply color/duotone tinting and use the exposure compensation and exposure lock controls separately of each other. 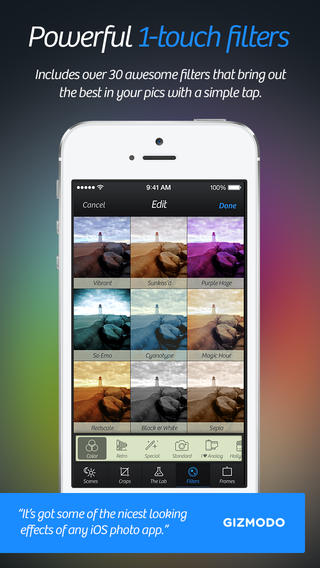 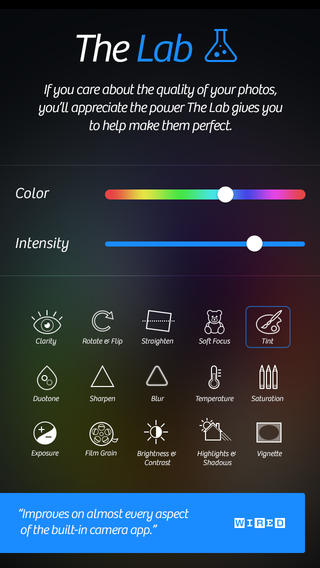 The official blog covers all of the changes in Camera+ 5 in excruciating detail so give it a read.

Here’s everything that’s new in Camera+ 5.

Clarity Pro
At the head of The Lab you’ll find Clarity Pro, which gives you adjustable Clarity and also adds a Vibrancy Boost adjustment which really brings out the life in your photos.

Straighten
Not only can you manually straighten your photos in The Lab… we’ve also included a slick auto-straighten feature.

Tint
Easily tone your photos whatever color you please. Go just a tad to set a subtle mood, all-out to make a bold statement, or anything in-between. And if you’re having a hard time choosing a color, simply roll the dice to get a random one… will it come up lucky seven or snake eyes??

Duotone
This takes the Tint adjustment and brings it to a whole other level. Try it. We’ll leave it at that.

Soft Focus
Give your photos a beautiful, ethereal quality with Soft Focus. This one’s addictive so promise not to overuse it, ok?

Film Grain
For the look of analog film. Fully adjustable so you can get the exact look you want.

Sharpen
This can often be the answer to a photo that came out a bit blurry.

Blur
Soften harsh pics. Or go to the extreme to make the perfect iOS 7 wallpapers. More on this later… 😉

Saturation
Take it down for a cool, faded look. Or crank it up to make your pics pop.

Temperature
Easily enables you to make your pics look “warmer” or “cooler”. It can be used for a simple compensation, or turned way up for a bold look.

Exposure
Photo overexposed? Underexposed? This is the fix.

Brightness & Contrast
Two classic photo adjustments. You’d think that not much needs to be said about these two… but we went out of our way to make them look really good.

Highlights & Shadows
Boost or cut the bright and/or dark parts of your photos. Compensate for imperfect lighting conditions, or go for an intense, artistic effect.

Vignette
Top-off the perfect set of adjustments with a stylish Vignette. Not only can you put on a traditional dark one, you can also go light for an airy feel.

[iPhone 3GS users please note: The Lab requires some pretty intense processing and unfortunately, your meager phones aren’t fully up to the task. But instead of bolting The Lab door on you completely, we’ve given you access to the sections that didn’t melt our test phones. The 8 lucky phones that lived yielded Rotate & Tilt, Straighten, Tint, Duotone, Soft Focus, Saturation, Temperature, and Exposure.]

Shooting refinements
We’ve taken yet another pass at streamlining the shooting experience in Camera+. In Camera+ 5, we’ve split the exposure compensation and exposure lock controls so that you can have even easier access to each.

iPhone wallpaper crops
As mentioned earlier, Camera+ 5 enables you to make some very awesome iOS 7-style wallpapers. Here’s the ticket: Simply grab one of your favorite pics and take it to The Lab. Then crank the blur way up and add a touch of saturation. Apply one of the new iPhone wallpaper crops, and voilà… a nifty iOS 7 wallpaper is born!

A Tale of Two Dicks
We’ve renamed Effects to Filters and Borders to Frames. We’re letting you know so you can avoid that feeling you got when Bewitched switched Darrins and Rosanne switched Beckys on you without uttering a word.

New icons throughout the app
Dozens of icons in the app have been redone and have the perfect look to go with iOS 7.

Shiny, new app icon
And the most obvious icon that changed for Camera+ 5 is the app icon itself. It was hard for us to let go of the old icon. But we came up with one that captures the essence of the longstanding Camera+ icon (albeit in abstract form), and fits like a glove on the first page of your home screen alongside all your other iOS 7 icons.

This new version of Camera+ for the iPhone and iPod touch is free for those who’ve previously purchased it.

The 28.5MB download supports natively the iPhone and iPod touch devices running iOS 6 or later. The iPad edition of Camera+, a $4.99 download, has not yet been updated with these features, but don’t worry – we’ll keep you posted as soon as it’s out.