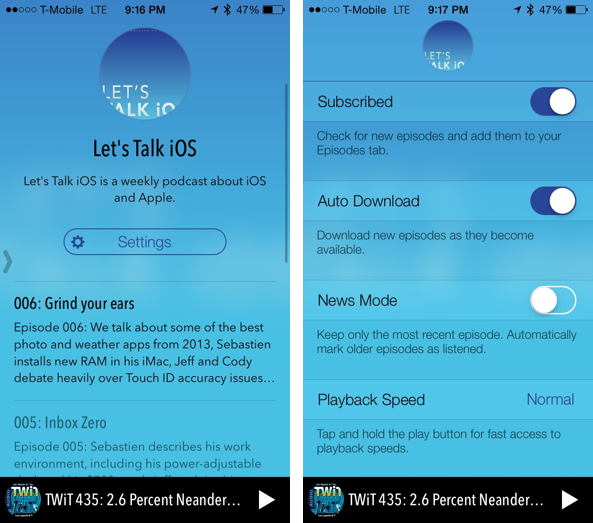 There’s no shortage of podcasting apps on the App Store. The growing popularity of podcasting directly correlates to the large amount of podcasting apps we see surfacing. Already, we have apps like Apple’s official Podcasts app, Instacast, Downcast, Pocket Casts, and that’s just naming a few. Even Podcasting networks like Mule Radio Syndicate—home of popular podcasts like John Gruber’s The Talk Show, and 5by5, the fruitage of podcasting pioneer, Dan Benjamin—have created their own dedicated podcasting apps.

So when a new app enters this arena it better be good. No, scratch that; it better be outstanding. That’s the only way that newcomers will be able to gain traction in this ever-growing and uber-competitive market.

It helps to start with a catchy name. Castro—the creation of Supertop’s Padraig Kennedy and Oisin Prendville—starts out on the right foot in this regard. Its name is the type of play on words that makes itself instantly recognizable, even amongst the podcasting app mainstays listed above. But Castro is more than just a good name; it’s a good app, too.

After launching Castro, the first thing that stood out to me was the simplicity of its interface. There’s not a lot of buttons, toggles, or settings to be found. In fact, when you first launch the app, there’s only three buttons available to use: Podcasts, Episodes, and a ‘+’ button for adding new podcasts to your library. Even after adding podcasts, there’s only one button dedicated for settings pertaining to individual shows. Pressing this button yields an additional four toggles, but if you’ve used some of the other podcasting apps mentioned before, you know that pales in comparison.

Castro touts its interface as one that puts content front and center, and I think that’s an apt description. One example of this is the full-screen tint based on the color of a show’s podcast cover art. In our case, the episode listing for Let’s Talk iOS is tinted blue, because our podcast cover art is blue. Castro isn’t the first app to do this; it’s not even the first podcasting app to do it, but it probably does it better than any of the others. 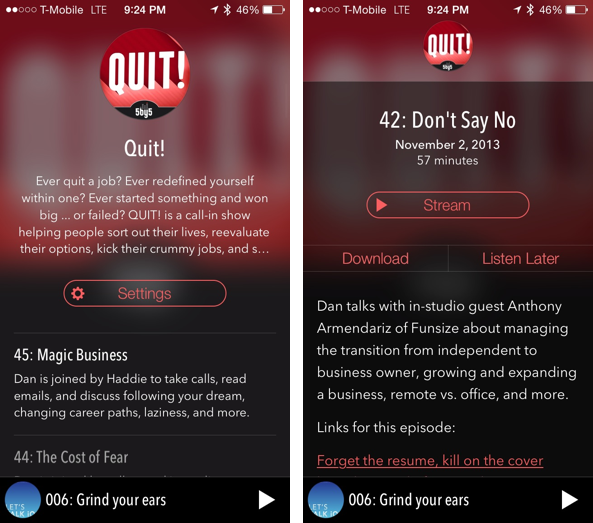 Castro’s control is heavily based upon gestures. There are gestures for switching between a list of episodes and podcasts, gestures for deleting or marking a podcast as played, gestures for refreshing your list of podcasts, and more. One of the hardest things to get right with a podcasting app is the so-called “now playing” screen. This is the screen that hosts the transport controls used to control the app, so you’ll find things like play/pause, back, forward, etc.

Most podcasting apps go to an extreme—either there are way too many controls crammed into this screen, or there simply aren’t enough controls available to the user. It’s something that’s hard to get right, and it is the subject of Marco Arment’s concern as he progresses through the development of his own podcasting app. Castro does a good job with transport controls, though, there are some areas of improvement that can be made.

My main beef with the controls is that they are too small. For someone like me, who has huge hands and fingers, it’s hard to maintain proper precision with buttons as small as these. Others may balk at the lack of options—there’s no sleep timer controls, for instance—but again, Castro is aiming at a simpler, content-focused scheme. 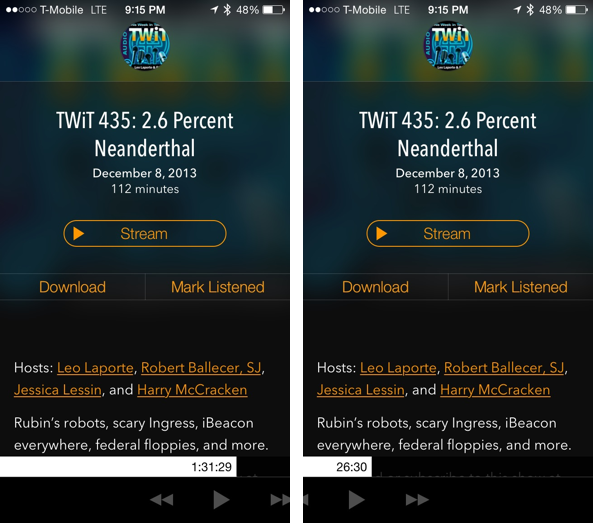 My favorite thing about Castro’s transport controls is its scrubbing feature. By using a tap+hold+slide gesture, you can easily scrub through the contents of the podcast with near bullseye-precision. I think scrubbing could be even better if it adopted zooming, but it’s as good as I’ve seen from any podcast app thus far.

One of the best qualities of Castro is its sense of simplicity. For instance, managing your subscriptions isn’t some long drawn out affair with a steep learning curve. With Castro your subscriptions fall within two buckets: podcasts and episodes. As you might imagine, the podcasts bucket contains a list of all of the shows you subscribe to. From there, you can tap each show to display a page dedicated to the specific show of your choosing. You’ll find album art, a description of the show, a settings button, and a list of all of the show’s episodes going back to episode 001. It’s fantastically simple. 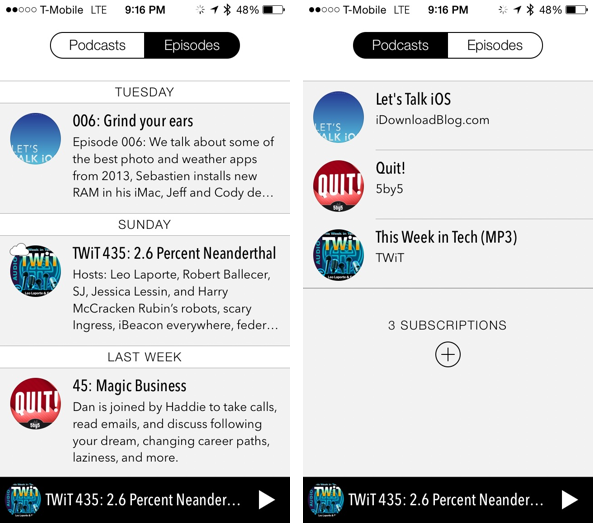 If you’re hit-and-miss with podcasts, then you’ll appreciate Castro’s “news mode.” This option—found in the individual show settings—makes it so that only the most recent episode from each subscription is displayed in your episodes bucket. If you’re the type of listener that doesn’t follow show cannon, this can help absolve some of the feelings of guilt that come with missed episodes.

Seasoned podcast listeners will enjoy the easy to use search found in Castro, because you likely already know what you’re looking for and what you’d like to subscribe to. For new podcast listeners, Castro is a bit more difficult to use, because its discovery features lack when compared to other apps like Pocket Casts. Castro contains no curated lists, and I still have yet to find a way to manually add a podcast subscription to the app. For example, I wanted to add Let’s Talk Jailbreak—our on hiatus, banned from iTunes podcast—but I was unable to do so because there doesn’t appear to be a way to manually add feeds. If you find a way to do so, let me know. 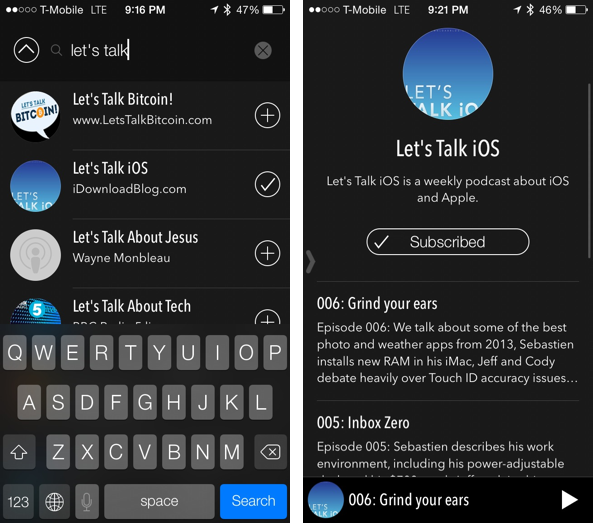 For those of you who do find something new to listen to, but aren’t quite ready to make a full commitment, Castro features the ability to stream any podcast even if you haven’t subscribed. Just search for the podcast, tap its details, tap the episode, and tap the stream button. You can also individually download podcast episodes that you don’t subscribe to, or use the listen later feature to place a bookmark of the episode in your episodes bucket.

Castro is available for $2.99 on the App Store (iPhone only for now) for a limited time, that’s 50% off of its retail price. If your a seasoned podcast listener who doesn’t need a lot of superfluous features, then I think you’ll love Castro. If you’re new to podcasts and you’re still in the discovery mode, then I suggest Pocket Casts instead. If you hate that Castro doesn’t have extras like sleep timers, the ability to organize your episodes into designated folders, concurrent download management, or smart playlists, then perhaps you’d be better off with something insanely deep like Downcast. With any of the aforementioned podcast apps, though, you’ll be perfectly fine, but Castro is the best overall experience I’ve seen from the genre thus far.