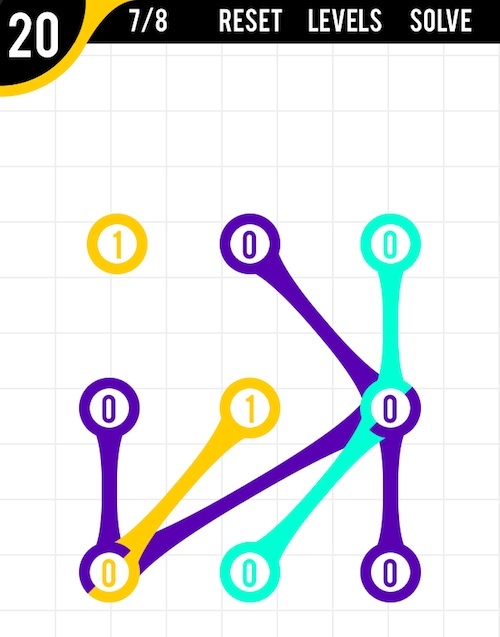 Around this time of the year, we start to get too busy to spend too much time siting in front of our favorite video game, yet we still find ourselves standing in line doing nothing for extended periods of time. During the holiday season, casual games are a must-have for a gamer’s mobile device.

Strand is a casual puzzle game that is simple enough to not occupy too much of your brain, but complex enough to keep you coming back for more…

The game’s design is simple. It is like connect-the-dots, but with color matching and obstacles. Players must use a certain number of lines per color, but can’t cross the lines or double up moves. The game board is a white grid with a specific number of dots in different colors. Each dot has a number inside of it. When you connect two dots of the same color by dragging your finger from one to the other, the number inside of both dots will decrease. The number inside any dot that connects to another dot will reduce by one each time it is connected. The goal is to get all dots to zero.

On some levels, black bars appear. These bars are like walls. You can’t draw a line from one dot to another if a black wall is in the way. There are also little black dots. These dots allow users to bend a straight line so that they can go around certain objects, like a black wall, for example. On some levels, circles with dotted lines around them appear. These are teleport portals. Players can send a line from one dot, through the portal, and back out another one to reach a dot on the other side of the screen.

The game comes with two standard packs of 25 levels each. Additional packs with increased difficulty can be purchased for $1.99 each. Players can also purchase the game customization pack, which lets you customize the menu and game colors. 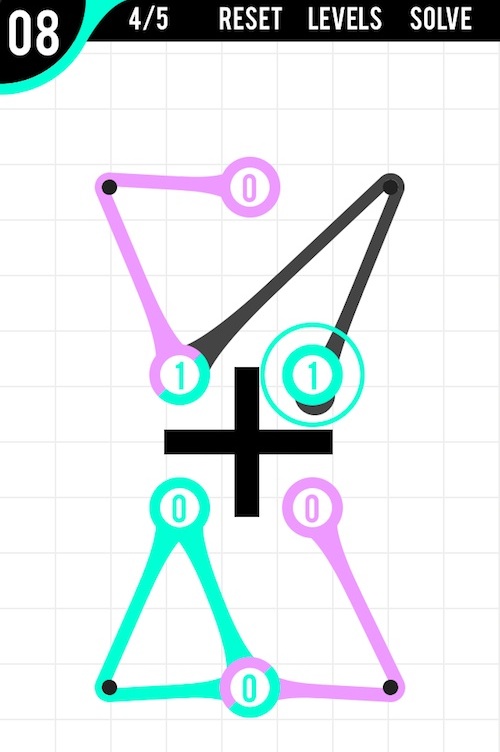 Players must connect colored dots using a specific number of lines. Each dot has a number inside it. That number indicates how many lines must be used. When you connect one colored dot to another dot of the same color, the number inside will reduce by one. Players must reach zero for all dots on the board.

To create a line from one dot to another, touch the first one and drag your finger to the second one. This will make a line appear in the same color as the dots. If there are multiple dots, connect lines in as many different ways across as many different dots as possible.

Lines cannot cross each other. If four dots are near each other, players can’t cross two lines, even if they are the same color, in order to reduce the numbers to zero. So, for example, if the four dots were horizontal and perpendicular to each other in two-by-two columns and rows, you could reduce the numbers by connecting one to another like a square. Then, you could connect one more line inside the square from one corner dot to another. However, you could not perform that same move again with two other dots in different corners or the lines would cross.

Some levels include black walls that make it impossible to create a line directly from one dot to another. When a wall is blocking your path, you will need to use some other feature.

Many levels include black dots that are like poles so that you can bend a line. It is like wrapping a rope around a pole. These black dots give players the ability to go around object and connect to dots that are not necessarily directly across from them.

Levels also include portals that allow you to teleport a line from one side of the screen to the other without running into obstacles. Drag a line to a portal and it will reappear in a designated exit portal. Then, drag the line to the dot you wish to connect to.

The first 50 levels that are free with the app are fairly easy, but increase in difficulty slightly. It is clear that the additional packs will be harder and offer a more significant challenge. Even if you don’t want to spend money unlocking additional packs, the free download will keep you occupied for about an hour. 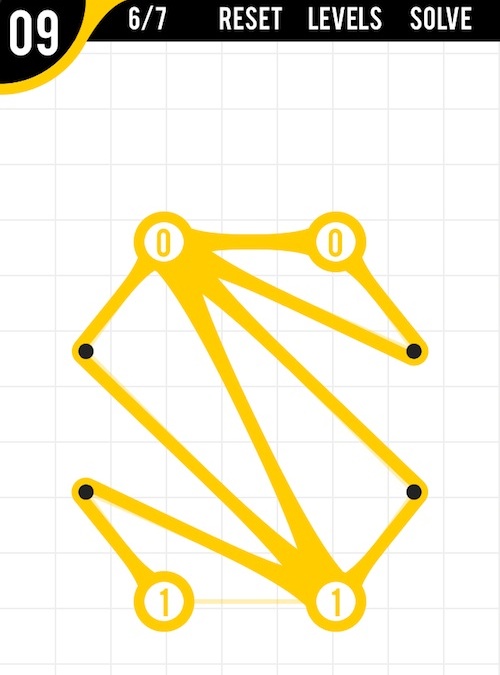 This is a very unique puzzle game that requires skills in spatial reasoning. Players must think ahead in order to plan where to connect the dots. It is easy to figure out, but offers just enough of a challenge to keep players interested.

You don’t have to spend a dime playing this game. However, to get every level available, you would have to make a few in-app purchases. The three additional packs cost $1.99 each, for a total of nearly six dollars. The full price of the game is a little rich. I’d like to see individual pack prices drop to only $0.99 each.

Strand is free to download and it comes with two packs for a total of 50 levels. As I mentioned above, the price of each additional pack is $1.99. While the first 50 levels is a great bargain, the six-dollar price tag for the rest of the games is too expensive. It would be worth the money at $0.99 for each pack.

Fans of casual games should definitely download the free game. The puzzles are fun and not too challenging. However, by the time you are attempting to solve puzzle number 48, you will see that things are getting harder. The additional game packs can be purchased for $1.99 each, which is a little too expensive in my opinion. However, the game is worth downloading for the 50 free levels. Download it in the App Store today.

Flow is another puzzle game that features simple graphics and a puzzle challenge. For a serious challenge with arcade graphics, try Tilt to Live 2.