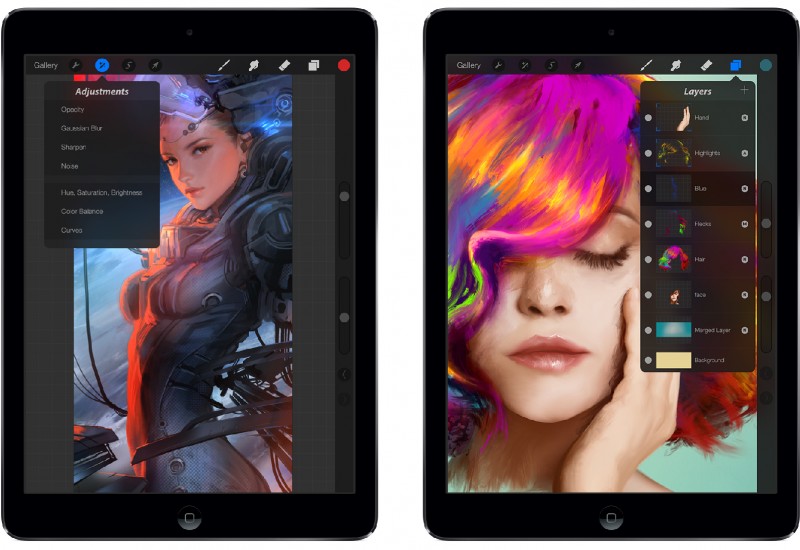 Procreate, the Apple Design Award winning illustration app for the iPad, is a seriously addictive and immensely powerful piece of software which turns your iPad into a digital painting canvas, thanks to the incredibly accurate and smooth Silica painting engine.

The team back in August enhanced Procreate by adding support for Wacom’s Intuos Creative Stylus along with the ability to make canvas recordings in full HD (1080p).

In a major iOS 7 focused update today, Procreate version 2.0 introduces full support for iOS 7 and Apple’s 64-bit A7 processor, with additional optimizations for the new iPad Air and iPad mini with Retina display. More importantly, Procreate 2 now includes new filters and adjustments which take advantage of your tablet’s GPU through a hardware-accelerated engine, a first for Procreate…

The new icon is wonderful.

The GPU accelerated filters and adjustments are not pre-baked automated consumer filters found in other Apps – these are a set of advanced tools which allow you as an artist to create a limitless amount of effects and adjustments.

Your canvas now supports 4K resolution, by the way.

Other features in Procreate 2:

I also like that Procreate 2 has an all-new resolution-independent vector interface.

“This means Procreate 2 is lighter, less resource hungry and future-proofed in the event of resolution changes,” the team says. “We think it’s also the start of something big and we plan to develop this technology even further”.

More information about Procreate 2 is available over at the Savage blog.

Check out this timelapse video in which one artist creates the ‘Magical Forest’ illustration using the previous version of Procreate for iPad.

This update is free to those who already own Procreate.

Procreate is available on the App Store for six bucks (trust me, it’s a money well-spent).

The download weighs in at 54.1MB and requires an iPad running iOS 7.0 or later.