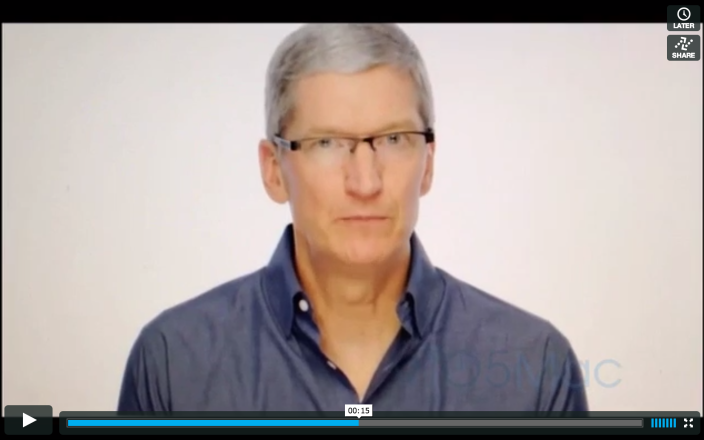 In an unusual move yesterday, Apple CEO Tim Cook reached out to company employees via a video message urging them to familiarize themselves with Apple’s Business Conduct Policy. The message, posted to Apple’s internal system, quotes Dr. Martin Luther King Jr saying “The time is always right to do what is right” in order to encourage employees to speak up about conduct that may violate Apple’s policy.

Along with the video message, employees also received an email from Apple’s top lawyer who goes on to reiterate Apple’s core values of honesty, respect, confidentiality, and the “critical obligation of every Apple employee to adhere to legal principles”, such as antitrust and anti-corruption laws.

Apple has even put together a new code of conduct iBook for employees with multimedia content including galleries, video, audio and multitouch widgets. The full message is right after the break…

The Business Conduct Policy covers employee policies related to speaking to the press, media inquires and endorsements, as well as Apple’s business culture dealing with personal investments, workplace relationships, outside employment and more.

Other topics discussed in the document touch upon the subjects of workplace harassment and discrimination, insider trading and substance abuse.

Jordan Kahn of 9to5Mac was able to get gold of an internal email to employees, here it is in its entirety:

I am writing to ask you to do something very important — set aside a little time to review Apple’s Business Conduct Policy. It explains in very clear terms how you are expected to conduct yourself with our customers, business partners, government agencies, and fellow employees. We expect every Apple employee to understand and comply with these rules.

The Policy is based on Apple’s core values of honesty, respect, confidentiality, and the critical obligation of every Apple employee to adhere to legal principles, like antitrust and anti-corruption laws. Living by it is how we earn the trust of our customers and partners and how we keep Apple a great place to work.

The Business Conduct group has developed a new version of the Policy in iBooks format. The book is convenient and engaging with galleries, video, audio and multi-touch widgets all designed to help you learn about Apple’s principles of business conduct. You can download the new book via Switchboard, or access a web-version here.

If you have questions, or information about conduct you think may violate the Policy, don’t be afraid to speak up. Talk to your manager, your HR representative, or contact the Business Conduct Helpline — which can be done anonymously.

Thank you in advance for treating this seriously and taking responsibility for demonstrating high integrity in every aspect of Apple’s business.

It’s curios that Sewell’s message opens with a rather ominous sounding passage urging employees to “to do something very important” while making it pretty clear that Apple expects its every employee “to understand and comply with these rules”.

Although leaks are never mentioned specifically, it sounds like Cook is aiming to clamp down on the increasingly leak-happy culture which has managed to spoil virtually every product launch since Steve Jobs’ October 2011 passing.

The iPhone 5, iPhone 5s, iPhone 5c, iPad mini and Retina MacBooks have all leaked out in this form or another months in advance. The 9to5Mac author acknowledged as much:

Tim Cook has since mentioned leaks to employees with one source telling us Cook referred to leaks as the “enemy” during a town hall meeting at Apple earlier this year.

The CEO has plenty of reasons to be concerned about corporate secrets being leaked to press, which takes the surprise factor out of the equation. As a result, Apple’s carefully choreographed product presentations are increasingly lacking the ‘one more thing’ element to them – a surprise announcement no one saw coming.

With the exception of the radically revamped Mac Pro – and to a certain extent the Touch ID fingerprint scanner – Apple’s past few keynotes have failed to generate the same level of buzz and excitement compared to the secrecy-obsessed Steve Jobs regime.

I’m not sure that Cook fully understands that most of the leaks originate from Apple’s vast network of suppliers and manufacturers in Asia rather than from employees working at Apple’s corporate headquarters in Cupertino, California. That said, I don’t blame Cook – the guy just isn’t as media-savvy as Jobs used to be.

And I’m not even sure the leaks are preventable at this stage. Apple partners with hundreds of companies that employ tens of thousands of workers who build parts and assemble its products. The company can impose only that much restrictions and proactive measures to tighten the supply chain.

At the end of the day, all it takes to leak a secret is some guy in his dorm room in China posting a video of a five-inch screen or a backplate belonging to an Apple prototype product.

Which brings me to my question of the day: has Apple become to big to prevent the leaks?