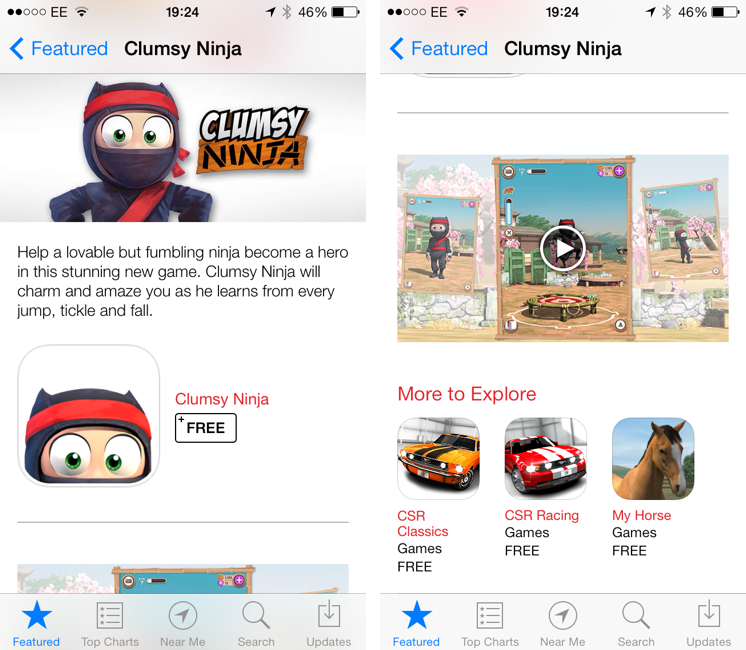 This Tamagotchi-like game invites you train your ninja, teach him new tricks and moves, customize him with suits and headbands and what not. Apple was quick to feature the game as Editor’s Choice and what’s really interesting is that the description includes a video trailer, a first for the App Store.

It’s unclear whether that’s a one-off convenience or if Apple is actually ushering in a new ear of better marketing for app developers. Either way, we’re not complaining…

Kudos to MacStories editor Federico Viticci for spotting this first:

The big news is, of course, the fact that Apple is embedding a video in the App Store, which has historically only allowed developers to include up to five static screenshots for their apps.

Clumsy Ninja’s video opens the built-in iOS media player in portrait mode, and it features music playing in the background with no voiceover or custom App Store branding. It is, effectively, a game trailer on the App Store.

As you can see in his screenshots top of post, the video is embedded right into Clumsy Ninja‘s App Store description and is immediately watchable on your iPhone, iPod touch or iPad via the built-in iOS media player.

Viticci goes on to mention that the trailer is only accessible via the special Featured page for Clumsy Ninja, “as the app’s regular App Store page doesn’t show the trailer”.

I’m curious to learn whether this is just a link to a YouTube video or if Apple is in fact hosting the clip on iTunes servers. That being said, I’ve always wondered what’s up with Apple’s screenshots-only approach, especially as Google has been offering promotional videos and trailers within the Play Store for quite some time.

The question is, will Apple allow other developers to embed promo footage along with the App Store screenshots?