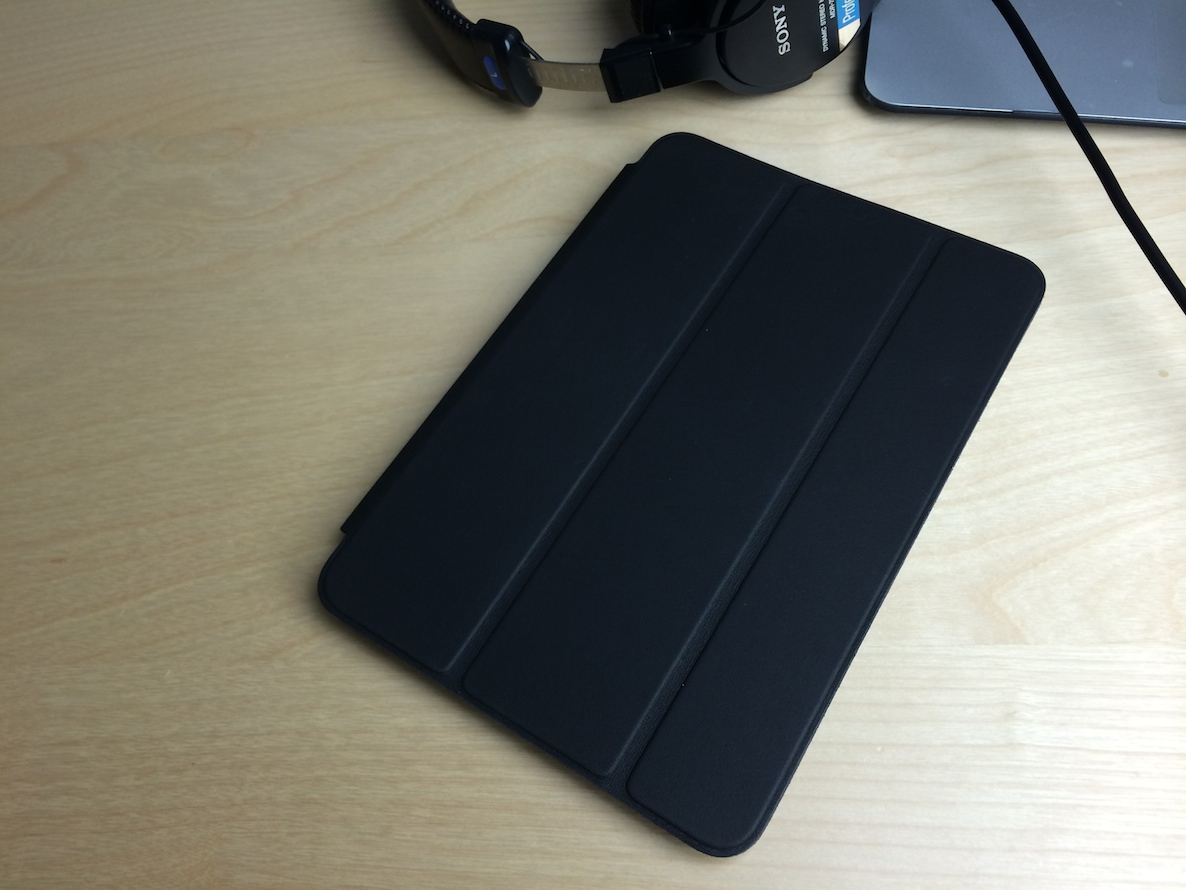 I briefly talked about Apple’s new Smart Case for the iPad mini in yesterday’s iPad mini with Retina display review, but after giving it some thought, I think it deserves some more attention.

Let me just start out by saying that I’ve not used the Smart Case for the full sized iPad Air, so I can’t really speak on that. In fact, this is my first experience with a Smart Case. I’ve used Smart Covers plenty of times in the past, but never opted for a Smart Case until now.

The reason I opted to go with the Smart Case instead of the Smart Cover really isn’t complicated. No, I’ve never been a big proponent of cases, but with the way I use my iPad mini, it behooves me to use a case.

I’m someone who travels often with my iPad mini. I estimate that I take it out of the house at least 5 times a week while traveling around the city from place to place. I don’t have it all the time like my iPhone, but 9 times out of 10, it’s on my person.

With that in mind, I needed a case, and the Smart Case is the best option available for the iPad mini. Not only does it look good and feel good in the hand, but it provides the protection I was looking for. 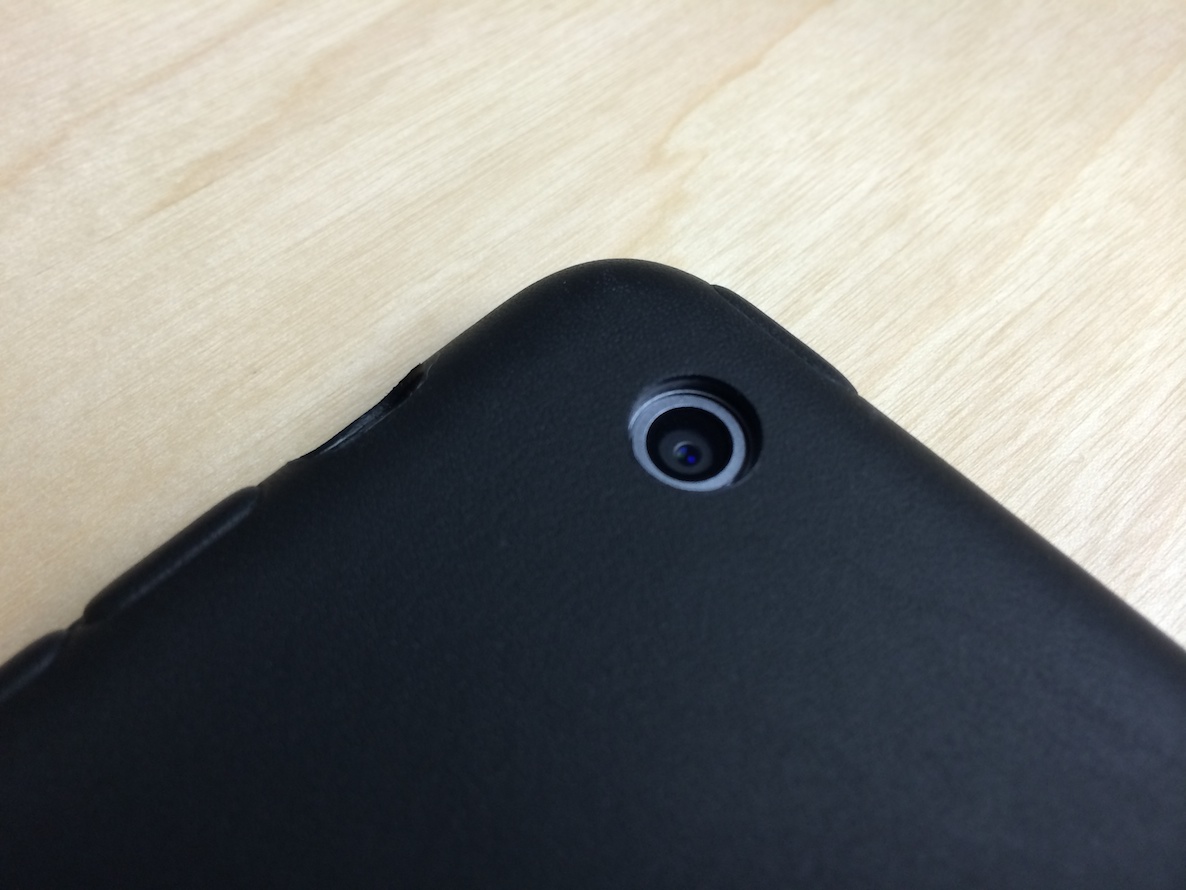 With the Smart Case, I can now confidently toss my iPad in my bag, lay it on any table, lay it on the floor, even. All the while I can be confident that no physical harm will take place.

As far as quality goes, you’d be hard pressed to find a 3rd party case that matches Apple’s quality. The Smart Case isn’t devoid of flaws, but the quality of the case is apparent.

Best of all, the Smart Case feels ridiculously good to hold in hand. The leather, while not Corinthian or anything like that, is adequate enough and feels good to the touch. The bottom line is that it’s pleasurable to hold the iPad mini while it’s in its Smart Case. 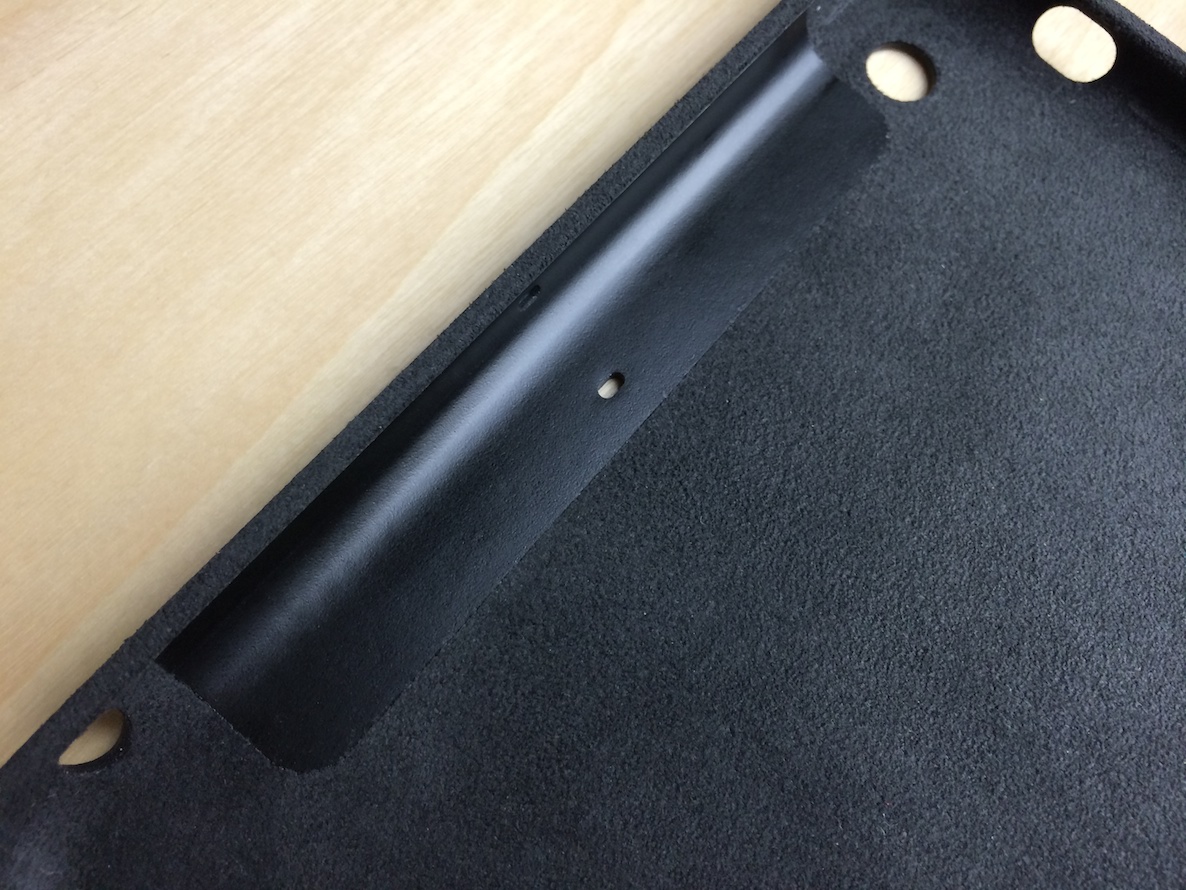 The cutouts for all of the ports and buttons are done so in a reasonable manner. The Lightning connector cutaway is big enough to accommodate third party Lighting adapters and some other accessories. You’ll still run into situations where you have to remove the iPad mini altogether, but for your average Lightning connector, you shouldn’t run into any issues.

The camera hole on the rear of the case is big enough to avoid interference with the camera. The same goes for the microphone ports, and headphone jack. 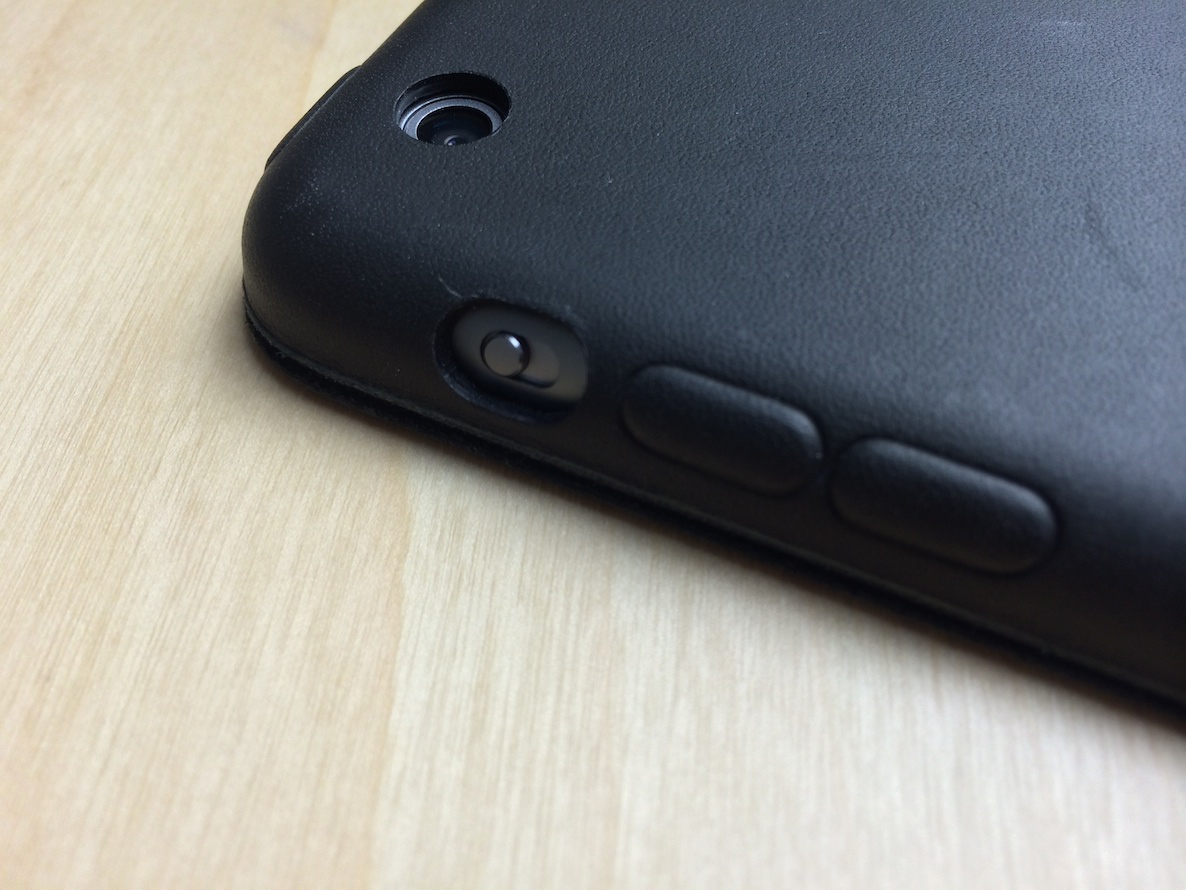 For the volume buttons and the mute switch, I have to admit that the case is a bit annoying when interfacing with them. Since the Smart Case completely covers the volume buttons and sleep button, some of the tactile feedback is lost in the process. It’s not a deal breaker, but it is definitely noticeable and something to consider.

The mute switch cutout is probably the most annoying aspect of the Smart Case’s cutouts. The switch is so deep that it’s hard to use the switch without thinking about it. It would have been nice if Apple could have tapered this hole a bit more to make it easier to adjust the mute switch.

The Smart Case is superior to the Smart Cover when it comes to functioning as a stand. The chances of it falling over and collapsing are much less, due to the fact that the cover is a part of the case as a whole. The Smart Cover has a tendency to disconnect while standing, because of the relatively weak magnets.

Like the Smart Cover, the Smart Case features magnets near its opening to interface with the iPad’s sleep/wake mechanism. This allows you to close the case or open the case to sleep or wake the device respectively. This has always been one of the iPad’s flagship features, and it makes it much easier to just pick it up or sit it down without thinking too much about it.

Outside of the recessed mute switch issue, the only other glaring flaw with the smart case is with its hinge. The hinge works, but the Smart Case’s front cover never sits perfectly flush with the iPad’s screen.

The buckle in the Smart Case could potentially invite foreign debris, but it’s unlikely. It’s more of an aesthetic annoyance than an actual problem in real world usage. 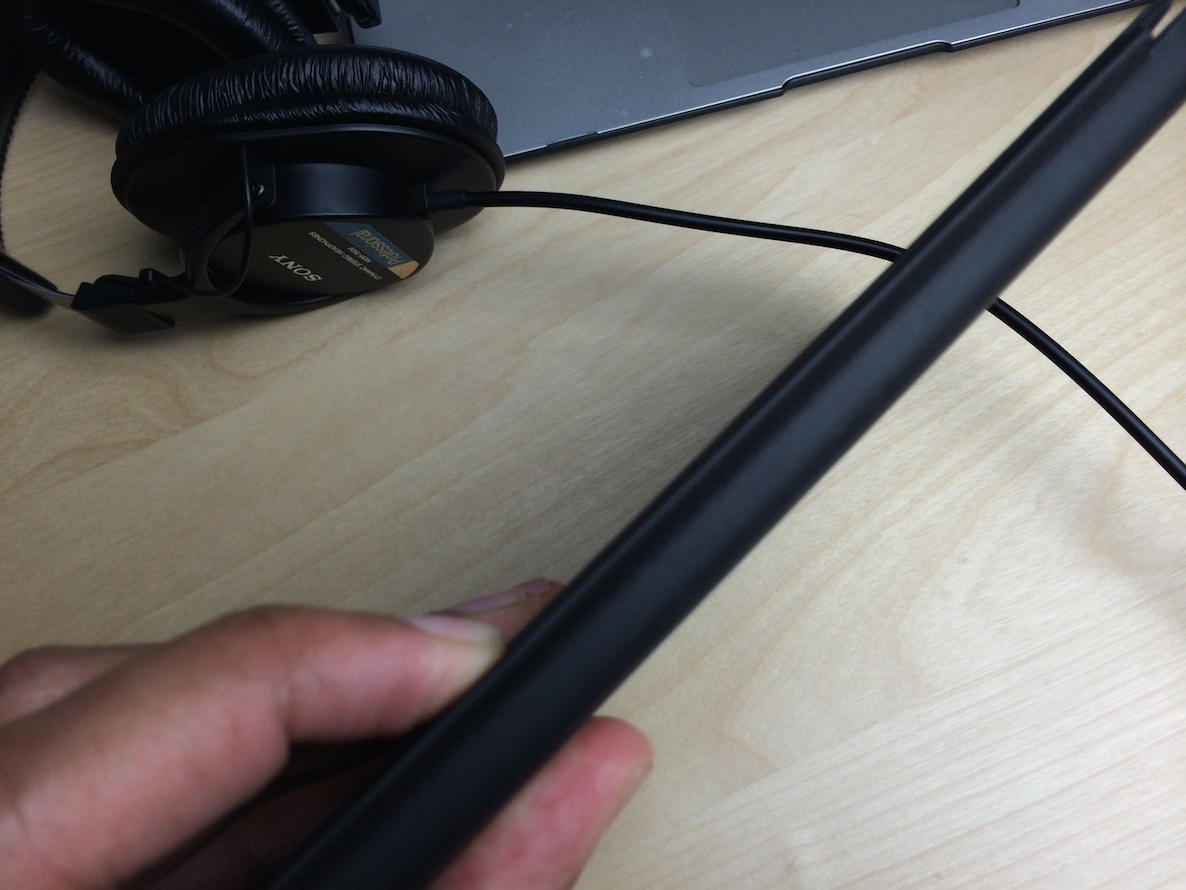 Calling it an “install” is a bit of a stretch, since all you need to do is place the iPad mini in the Smart Case and press it so it locks in. Actually, “lock” is probably too strong of a word. It’s a secure and snug fit, but it doesn’t click in or lend much confirmation that it’s seated in 100% securely. 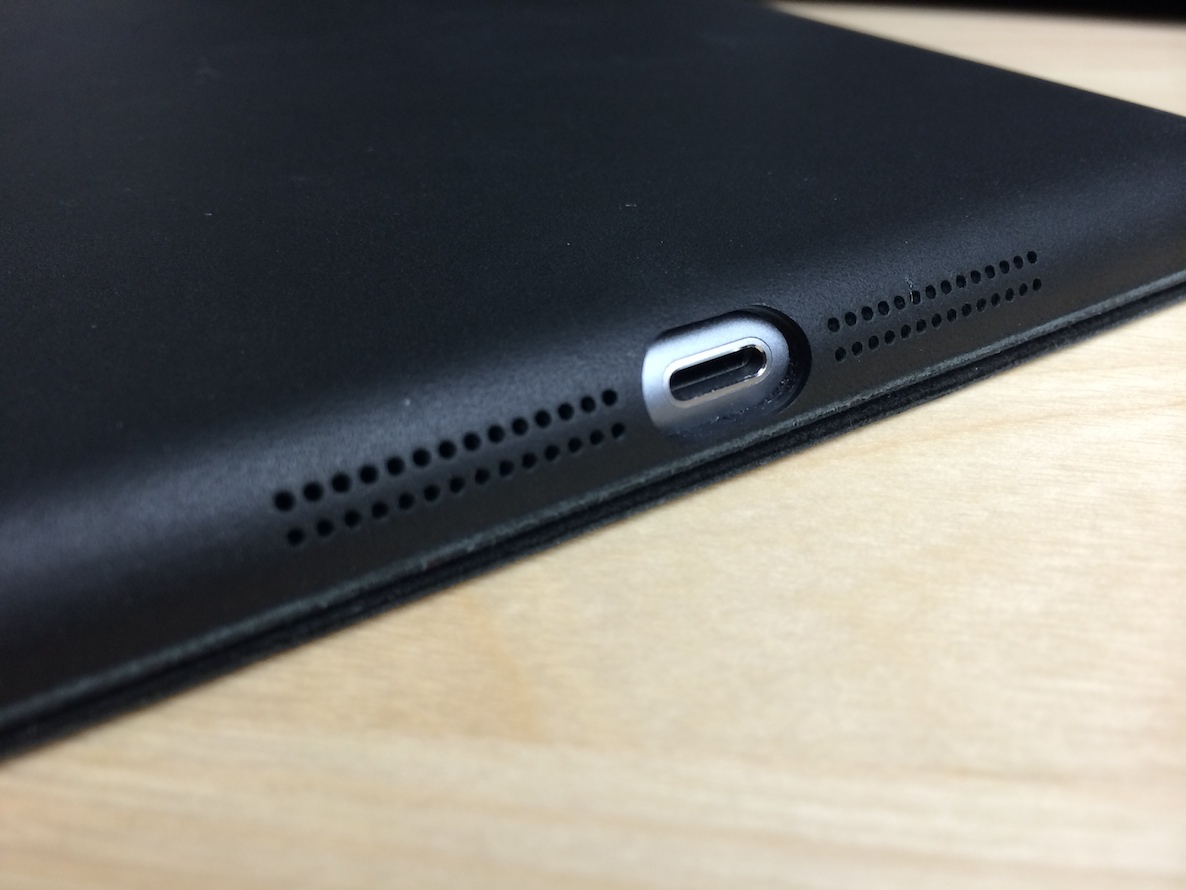 Removing the device from the Smart Case is just as easy. I recommend that you do so from time to time to remove any foreign debris that may have introduced itself behind the case.

Despite what others may say, I think that the iPad mini’s Smart Case is a great peripheral. It’s a bit steep at $69.99, but that’s the price you’ll pay for near total peace of mind.

The leather is classy feeling, easy to clean, and best of all, it takes the thought out of taking care of your newly acquired iPad mini with Retina display. I highly recommend it.