With the start of the 2013 holiday season officially less than two weeks away, Tim Cook and his lieutenants are adamant to turn Apple Stores into the best place to experience the magic of iPhone and iPad devices, Macs and other gear – all over again.

As is Apple’s wont, part of the upcoming festivities is a holiday-themed interior design and fitting tweaks, including this mesmerizing front window display.

A source sent in the above photo to 9to5Mac.

Zoom in on the image and you’ll notice that the glowing snow flakes are comprised of LED lights. It’s just awesome! 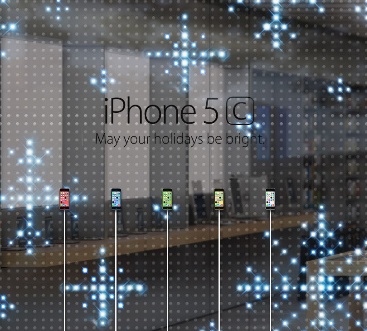 It’s going to be a Merry Apple Christmas, indeed!

9to5Mac claims these displays will begin “going up in many countries across the world later this week”, and will remain up until early January.

This is great news for customers, but not so much for Apple’s retail army.

Apple Store employees have little reasons to celebrate: while Tim Cook personally cancelled plans to keep additional Apple Stores open on Thanksgiving so employees get to be home with their families for the important holiday, retail managers attending Apple’s quarterly meeting this past weekend were unpleasantly surprised about this year’s holiday gift: $10 off of a $50 iTunes card, with one card per employee limitation.