Have you ordered your iPad mini with Retina display yet? If you’re still on the fence of buying the device, make up your mind sooner than later because the popular Apple analyst Ming-Chi Kuo is expecting tight supply this holiday season.

Kuo is very reliable and this is the first time he posted estimates of the numbers so it pays to take his remarks at face value. Corroborating his analysis, Rhoda Alexander of IHS iSupply cautions that shipments of the supply-constrained device won’t double until the first quarter of next year, meaning shortages are to be expected throughout the Christmas quarter.

Meanwhile, early adopters are now reporting receiving an Apple Store-estimated delivery date of this coming Friday, November 15. Jump past the fold for the full reveal…

9to5Mac reports that several people in the United Kingdom received an estimated delivery date of November 15. Customers in the United States are also starting to receive delivery estimates from Apple and UPS.

The earliest estimate from UPS mentions next Monday, November 18. Apple appears to be also quoting a November 21 delivery date for many day-one iPad mini orders, the publication reports. 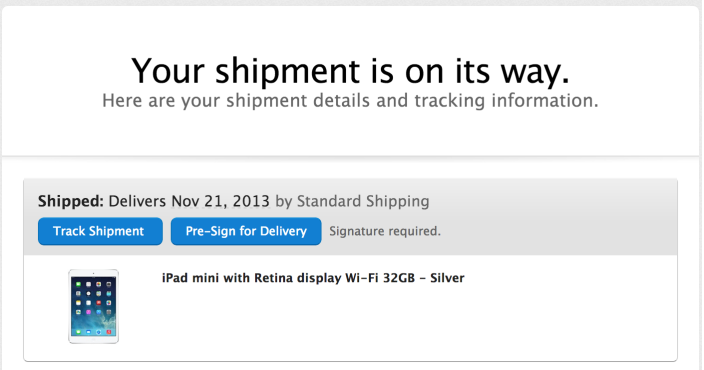 Rhoda Alexander of IHS iSuppli told CNET yesterday that she expected just two million Retina iPad mini units in the fourth calendar quarter of 2013. She estimated shipments growing to a total of about 4.58 million devices in the first three months of next year, a 102 percent quarter-over-quarter increase.

“When you think about some of the releases where they sold that many iPads in a weekend,” she remarked.

Ming-Chi Kuo of KGI Securities posted his own Retina iPad mini shipment forecast, have a look below (via AppleInsider).

As you can see, Kuo’s data matches up Rhoda’s.

His take on “structural challenges” the tablet market is now facing:

Only new applications, which will bring about new growth momentum, will be able to solve the structural problems the sector faces.

Dirt cheap products won’t spur up the excitement around tablets, that’s for sure.

Also notable: Kuo expects the iPad Air shipments to top a cool ten million units in the fourth quarter before dropping six million units in Q1 2014 as Retina iPad mini supply catches up to demand. Perhaps more interestingly, he’s adamant that Apple will finally phase out the iPad 2 by March 2014.

Bottom line: Retina iPad mini supply is going to be severely constrained throughout the entirety of the 2013 holiday quarter.

Indeed, had Apple been confident in its output, they wouldn’t have had to put the device on sale in such a stealthy manner. For example, the Retina iPad is available only via online orders and for personal pickup at stores.

Worse, only certain Wi-Fi models were available for in-store pickup at post time. The online Apple Store is now citing shipping estimates of one to three business days for 16 and 32GB models and five to ten business days for 64 and 128GB variants. 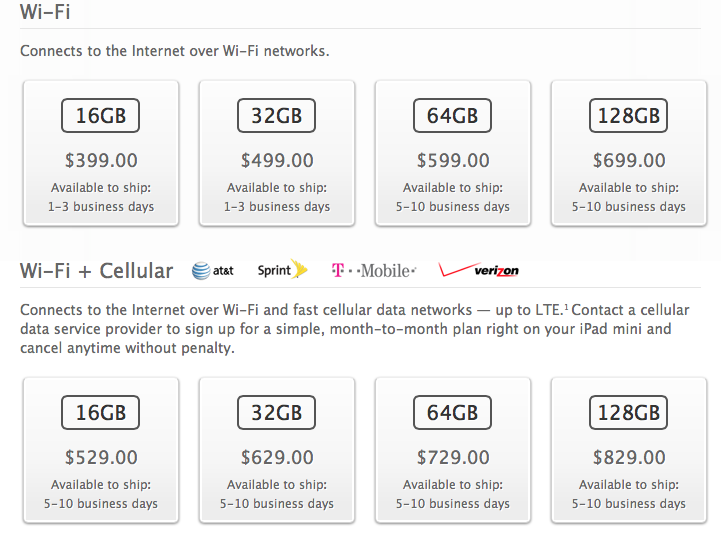 Compare this to yesterday evening’s 3-5 days estimate for 32/64GB models.

“We’re working hard to get as many as we can in the hands of our customers,” Apple’s marketing honcho Phil Schiller was cited as saying in yesterday’s press release.

Per supply chain chatter, Apple can’t ramp up device production fast enough because its suppliers LG Display and Sharp have been experiencing burn-ins with 7.9-inch Retina panels, prompting Apple to turn to Samsung for help at the last minute.

We ran a little non-scientific poll yesterday to measure Retina iPad mini preference and more than half of the respondents said they’d buy the device soon.

Have you received a delivery estimate for your order yet?