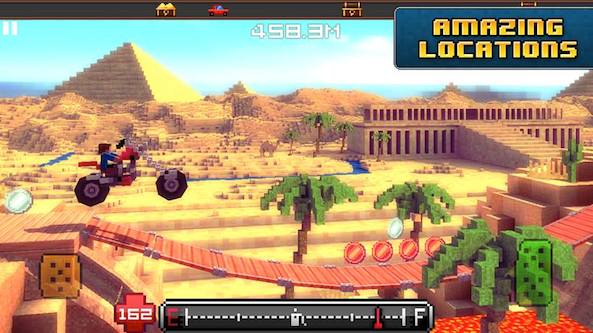 If you spend many of your waking hours building block houses, fighting off creepers and spending your sleeping hours dreaming of exploring the great-wide landscape of the pixelated paradise in an off road vehicle, then you are in luck.

Blocky Roads is a mix between the environment-building fun of Minecraft and the side-scrolling racing of one of the company’s other titles, Offroad Legends…

Players start at their farm, which has been destroyed by a hurricane. The goal is to rebuild the farm, block by block, by traveling from one track to another and finding the missing parts.

The game has two main parts. For one, players can build their vehicle from the ground up, block by block, to whatever they want. If you’ve always wanted to drive a Ferrari, you can make one with the car editor. You can build tanks, motorcycles, dune buggies, and more.

If you don’t want to waste your time building cars, you can pick from the nine pre-crafted ones and change the color to suit your mood. You can also modify your character with a wide variety of different hairstyles, shirts, and pants. Once you are completely customized, you can hit the road.

The second part is the side scrolling racing game. There are 12 unique tracks to race against a computer-generated opponent and four “challenge tracks” to push your driving skills to the limits. As you race along the bumpy tracks, you will collect blocks for your farm, fuel for your car, and coins for your rewards. You’ll be driving up steep hills, do loop-de-loops in the snow, and earning extra points for catching air.

After the race is over, head back to your farm to add the blocks and equipment you’ve found along the way and rebuild it to its former cow palace.

Blocky Roads is available for the iPhone, iPad, and iPod touch for $1.99. Download it in the App Store today.

Do you play Minecraft? Do you like games with similar themes? Or would you rather just play the block building game?