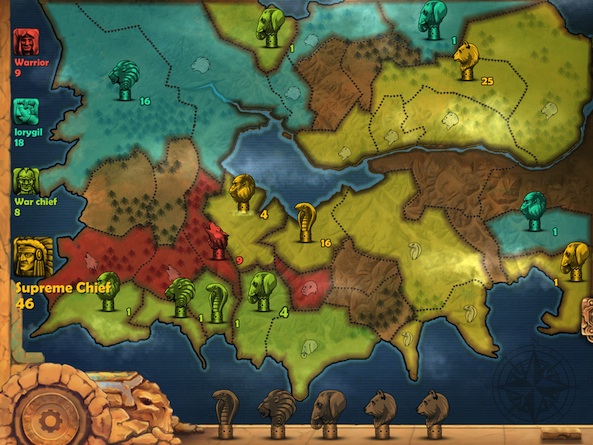 Land grab style board games are very exciting in real life. Stealing from your friends can be pretty fun. However, transitioning that type of excitement and emotion to digital form does not always produce the same results.

Totems: Game of Conquest is a land grab board game designed specifically for iOS. It has all of the rules and outcomes of a physical board game, but you don’t have to be in the same room to play the game. Thanks to online multiplayer mode, you can even steal from your friend, but you won’t risk having a glass of water thrown at you…

The theme of the game is ancient Mesopotamia style carved stone mixed with animal totems. The maps are not so ancient, but they have a distressed look to them. Players can change their name and icon to whatever they wish. You can even take a picture of yourself and the app will create a stone-carved version of your face. For each game, you can change your icon and totem color.

The map features animations of clouds floating by. The land includes topographical representations of forests, mountains, rivers, and the surrounding ocean. When you place a totem on the map, the region you selected will turn the color of your totem. Your opponent’s totems will do the same thing. After a time, the board will be peppered with between two and four different colors.

All players’ names, colors and icons are on the left side of the screen with their current score listed. You can access the menu by tapping the Settings icon at the bottom left corner of the screen. 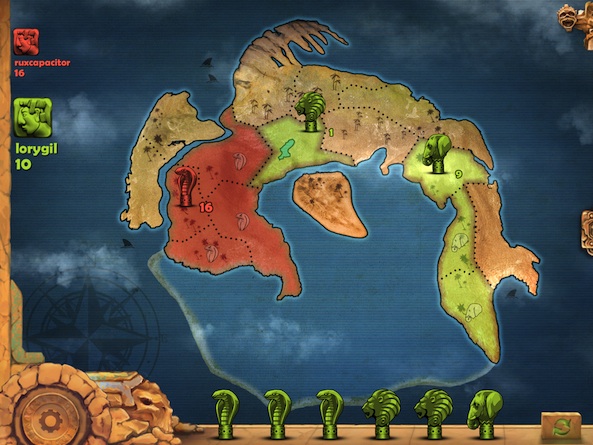 The goal of the game is to have the most territories by the time the whole board has been occupied. You can occupy a territory by placing a totem on the board. It is not that simple, though. Your opponent can steal your territory by placing a matching totem in the spot next to yours. For example, if you place a snake on the board and your opponent places a snake next to the territory you just captured, he then will occupy his own space, plus yours. The key to winning is in knowing how to seal off a section of territories, and then place the last totem so that you capture all surrounding areas.

Every matching totem that is adjacent to another will become the property of the person who placed the last totem. So, if four territories are all next to each other and all have a lion totem placed on them, you can capture all of them by placing a lion totem in the spot next to one of them.

Place your first totem and then watch what your opponent does. He may place a totem right next to you, or he may move on to a different area. The more totems you place, the more difficult it becomes to plan your win. When there are only a few free territories left, you have to decide if you want to try to capture the entire area and risk letting your opponent get the last chance, or if you want to bide your time until your opponent has made a wrong move, leaving the territories free for you to take.

Each map has a list of achievements that will unlock a new map when completed. For example, if you win a game against a random online opponent and win a game while capturing eight territories together, you will unlock the Labyrinth Map.

In multiplayer mode, you can play against someone in the same room over Bluetooth or local Wi-Fi. You can also play against a random opponent or invite a friend to play online through Game Center. You can have multiple games going at once so you don’t have to wait around for your opponent to take a turn if you still want to play the game.

Your player score will be added to the Game Center board so that others can see your relative ranking based on your wins and losses. Your score goes up against your opponent when you win, while their score goes down. The more games you win, the better reputation you will have as a ruthless conqueror. 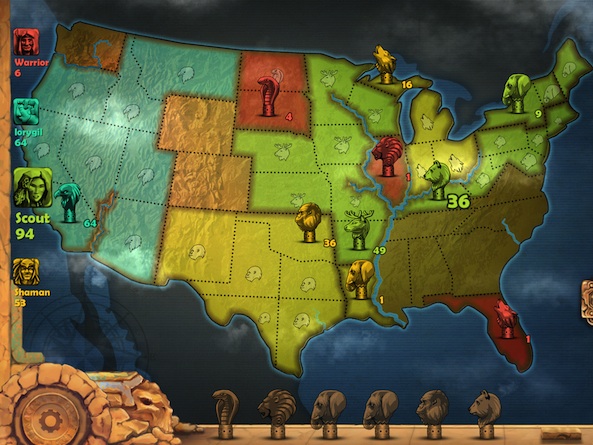 You don’t have to be an expert at land grab style board games to get a basic understanding of the rules. There is a brief tutorial that explains the rules of capturing territories and stealing your opponent’s land, but the rest is up to you. The way to become an expert at this game is to learn how to read your opponent’s moves and plan ahead for conquest.

There is nothing wrong with this game. It is easy to learn, fun to play, and offers plenty of challenges to keep you coming back for more. Online multiplayer mode works seamlessly and you can even chat with friends. The price is even relatively low considering most board game apps are five bucks and up.

Totems: Game of Conquest costs $1.99. That is a fairly inexpensive price for a game in this genre. As I mentioned above, most board game apps range between $4.99 and $6.99. This game could have easily been priced at $4.99 and not seemed too expensive.

Fans of land grab games will love being able to play this any time against friends or random opponents. You’ll never have to wait for board game night again. If you like the idea of this game, but are intimidated by what you might think are complex rules, fear not. It is about as easy to play as a game of checkers. This game is available for the iPhone, iPad, and iPod touch. Download it in the App Store today.

Carcassonne is an empire building board game that you can play online against friends or strangers. In Plague Inc., you are trying to annihilate the world instead of just conquer it, but the strategy is similar.

Do you play board games with friends and family? What is your favorite board game?