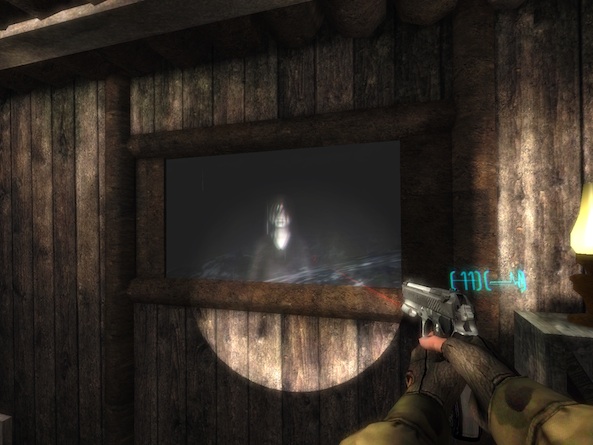 When I was in my early 20s, I played Resident Evil for the first time. That game scared the bajeezes out of me. I had to play it with the lights on and the volume down. That was the first time a video game put the fright in me.

Indigo Lake had the same effect on me when I recently played it for the first time. The eerie soundtrack and first-person point of view adds a creepy element that sends shivers down your spine as you look for clues to solving the mystery of the unexplained deaths surrounding the lake…

The game is expertly designed to give a realistic feel. All areas of the game incorporate an advanced lighting system so that anything outside of your flashlight beam is dim, and everything can be lit up to show what is lurking in the dark.

The game is played from a first-person-shooter point of view, so you are only able to see what is in your immediate eyesight. There is no top down or room view to help you see when something is sneaking up behind you. When you shoot your gun, the kickback gives you a realistic nudge slightly backward.

In addition to carrying a pistol, players take to the road in a jeep to help get them around the large, free roaming environment. It would take a long time to travel this landscape on foot. When you step into the vehicle, the point of view switches from first-person to third. However, your view is still limited by what is spotlighted by your headlights. If you drive too fast, you may find yourself flying over a cliff.

The game features picture-in-picture view, which shows your face as you are playing the game. You can also record your gameplay and save it to your camera roll for uploading to your favorite social networking sites.

You can also adjust the movement sensitivity, invert the look controls, and restart the game from the beginning from the Settings section.

It is important to note that there is a known issue with the game’s ability to save on some devices. The developer offers the following tip: “After you have clicked new game and reached the beach load the game once by rotating the device to portrait and clicking on the file icon with the up arrow then the green confirm button. This will ensure all future saves are correctly stored.”

The story of the game involves a very persuasive ghost who convinces people to kill themselves and haunts the area surrounding a lake. To unlock the mystery of the unexplained rash of suicides, find clues and solve puzzles that lead you to the killer apparition and put its soul to rest.

As a supernatural detective, you wander the town, exploring houses and figuring out what to do next. Each section of the game reveals a new mystery that must be solved. For example, after you find all of the suicide notes and get to the hospital, you must find the key that unlocks a section of the abandoned building you are trying to get into.

When you are exploring houses and abandoned buildings, you will only be able to see what is right in front of you, and most of the screen is dimmed. If a crate mysteriously flies at you, you may not even see it until it has whacked you over the head. Sometimes, an apparition will appear in a doorway that you just looked at a few seconds ago. One time, I was even accosted by a ghost and lost some of my health for a short period of time.

I still have a long way in the game to go, but the first few clues offer a great story with plenty of interactive objects in the environment.

In addition to limited vision, the game features a soundtrack that is about a disconcerting as a horror movie. The faint giggling (or was that crying?) of the young girl made me so jumpy that I had to turn down the volume all the way to zero for a while.

Even during the light of day, whenever I play the game, I get the heebie-jeebies and start to feel like something might be hiding under my desk. I have been successfully scared by this game. 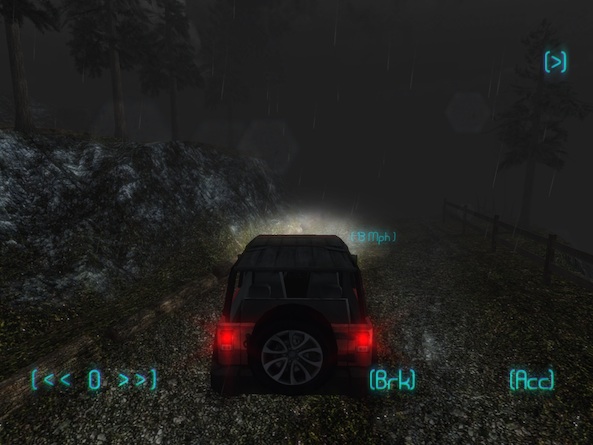 In addition to being genuinely frightening, the puzzles are also very challenging with little hints as to how to solve them. Sure, a few words scrawled across a wall mean something, but what? I love how hard the challenges are. It gives me plenty of time to explore the area around me, getting the chills for every hallway I walk down and jumping out of my seat every time a crate comes flying at me from behind.

If you get stuck in the game, there is a list of hints to help you get through them. Try not to use them too often, though. It will spoil the fun.

The controls are very awkward at first. Your character seems to run more than walk and it is difficult to control movement. You can adjust the movement controls in the Settings section, and that helps. However, I still found myself accidentally shooting my gun a lot of the time because I would touch the screen to look around, but trigger my weapon instead. The movement and look control area should be smaller and the weapon trigger should only be on the gun itself instead of practically anywhere on the screen.

Indigo Lake costs $1.99. Point-and-click adventure games like this usually cost around five dollars. You are getting a real bargain at this price. The game is rich in visuals and auditory enhancements, making you feel like you are living in a horror film. The price is very good for a game of this caliber.

If you are a fan of horror games, you will love this. It is creepy, eerie, and offers plenty of challenging puzzles to solve in order to move on. It incorporates first-person-shooter and driving action with point-and-click adventure gaming. It is available for the iPhone, iPad, and iPod touch. Download it in the App Store today.

Slender Rising is a horror game that will give you a good fright. Trauma isn’t particularly scary, but it has complex puzzles and uses lighting in a very interesting and unique way.

Do you like scary movies? What is your favorite horror film?