According to data from market research firm Counterpoint Research, Apple was the top US smartphone seller in September. The company overtook the spot from Samsung, who had been #1 in the country since May.

And it’s not hard to guess where the boost came from, Apple released not one but two new handsets last month. The iPhone 5s was the overall top selling smartphone in September, and the iPhone 5c came in third place…

Here’s the data (via Fortune): 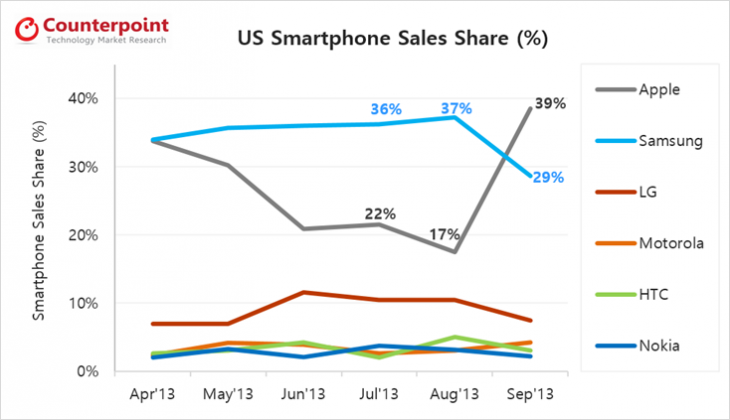 And a note from Counterpoint:

“In spite of supply constraints and just three weeks of sales, iPhone 5s raced to become the bestselling smartphone model in the US in September,” said Counterpoint research director Tom Kang. “The key reason for this sudden jump in sales can be attributed to the big wave of upgrades due in this launch month from Apple’s huge installed base of iPhone users in US. This depicts a healthy replacement cycle and user base growth trends for Apple despite the array of Android devices launching from tens of OEMs every month.”

There’s a few things worth note here. The first: I’m not sure where Counterpoint is getting its ‘three weeks of sales’ figure, the 5s and 5c went on sale on September 20th, with the latter getting a week head start via pre-orders.

And the second, remember how fast initial iPhone 5s stock sold out? The gold was gone within hours, and the others a few days. So I wonder how many people waited three weeks or more for a 5s instead of getting something else.

Of course, the real test of Apple’s iPhone power will come over the holidays and the following months. How well will it sell in the US and other places against the competition once the initial launch excitement wears off?