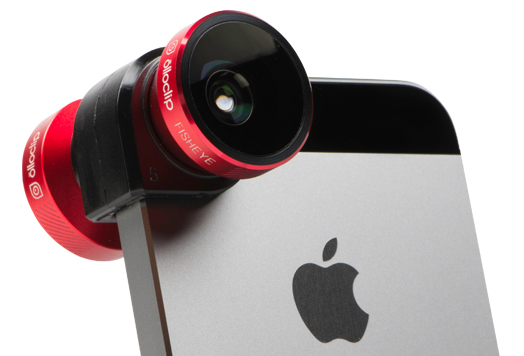 The iPhone camera lens attachment maker, Olloclip, today updated its multipurpose 3-in-1 iPhone 5 camera lens (it started out as a Kickstarter project) with compelling new features. The new 4-in-1 module packs in fisheye and a pair of wide angle lenses as before, with the addition of a more powerful 15x macro lens. The other side of the dual-sided accessory sports the 10x macro lens with an 18mm focus distance which was retained from the original model. Jump past the fold for the full breakdown…

Precision-grounded optics is encases inside an aircraft-grade aluminum material.

The barrels are made from aircraft grade aluminum using a CNC machine and then anodized. The iPhone attachment is made from a soft plastic material to ensure a secure fit every time.

It weighs less than an ounce, by the way.

The new edition is supported by Olloclip’s existing iOS app and works with any third-party app, in both photo and video capture mode, including the iOS Panorama photo mode and the iPhone 5s Slow-Mo video capture feature.

In fact, the clip-on attachment improves panorama mode by increasing the field of view horizontally and vertically. The official Olloclip app, a free download from the App Store, was first released back in March and then updated last month with iPhone 5s compatibility.

The Olloclip 4-in-1 works with the iPhone 4/4S/5/5s and the fourth and fifth-generation iPod touch. The gadget is available in black, silver and red through the Olloclip web store for $69.99. Olloclip warns about limited quantities and says the gizmo should start shipping on November 1.

Although it may never fill the needs of a pro with a DSLR, the Olloclip should be good enough for casual iPhoneographers and especially for the masses.

You may also want to check out Olloclip’s telephoto iPhone lens or the iPro lens kit from Schneider Optics.