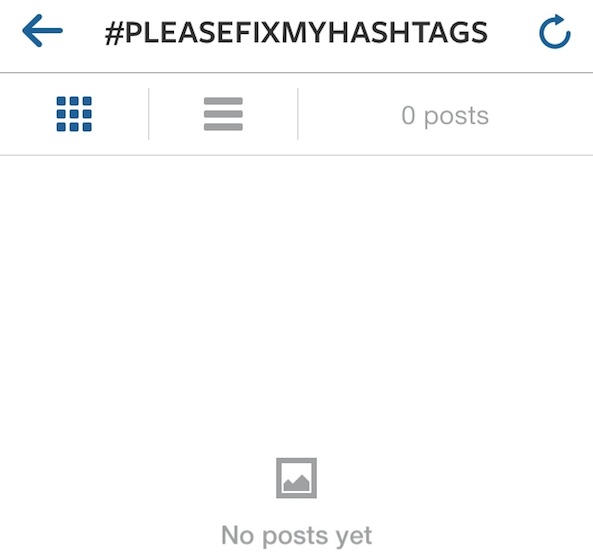 Do you remember the Instagram smoothie spam attack that happened a few months ago? For those of you that are not aware of the situation, let me give you a brief history. On July 27 of this year, many users found out their account had been hacked into, and pictures of smoothies and juices with a link to some scam site disguised as the BBC were posted from those hacked accounts

Although Instagram never actually explained what happened that day, the company quickly took “actions to secure the accounts involved, and the posted photos are being deleted.”

I was one of these people affected by the attack. I actually noticed my account had been hacked well before Instagram reacted. I did all I could do at the time, which was changing my password and making sure my account was not tied to any third party applications.

Since that day, I was never able to use Instagram to its full capabilities, and although I have emailed support several times clearly explaining my issue, I never heard back from them…

As mentioned above, I actually noticed that my account had been hacked early on, just minutes after the spam photo was posted without my consent. I quickly deleted the spam photo that had been posted to my account, I fixed my altered profile description, changed my password and made sure that my account was not tied to any third party application that could have let hackers in.

Later that day, Instagram said they had deleted the spam photos from accounts that had been hacked, and that it had sent hacked users a request to change their passwords. Because I had done all of that before Instagram was probably even aware of the situation, the company didn’t have to do anything with my account. They never deleted anything from my account, neither did I ever receive an email prompting me to change my password.

I realized soon after the attack that the use of hashtags in my photos was not working properly. I could add a hashtag to a photo of mine, but when I tapped on the tag to see the stream of photos in that feed, my photos were nowhere to be found. Of course, I tried with various hashtags. None of my photos would be displayed in the feeds. If you want to see an example, look at this photo I recently published on Instagram, tagged with #PleaseFixMyHashtags. The hashtag is there, but if you tap on it, it doesn’t show in the tag feed.

I also looked at my photos taken before the smoothie attack. Tagged photos were showing up in the tags feeds, as they were supposed to. That’s when I actually connected the dots and realized the problem had started when my account got hacked, on July 27.

I’ve been thinking a lot about this for the past three months and I came up with a possible explanation of the problem. I believe that when my account was hacked to send photos of a smoothie with spam links, several of my followers probably reported the photo and my account as spam. This probably triggered some kind of filter that now makes it impossible for my photos to show in their respective tag feeds. In short, this filter would be a way for Instagram to block spammers from spamming tag feeds.

I also believe that if I had not done anything about it and let Instagram delete the photos and prompt me to change my password, I wouldn’t have encountered any issue. To sum things up, I believe that taking action so early to fix my hacked account ended up being the source of the issue. Instead of having my account labeled as “hacked into,” my account was probably labeled as “this guys is a spammer,” simply because I took care of things before Instagram was aware of the problem.

I started looking online and found dozens of cases similar to mine. In some cases, people were able to pinpoint the problem to the smoothie attack, just like I was. You can see similar complaints to mine here, here, here, and here. In most cases, similar complaints started appearing after the July 27 smoothie attack, and those that reported the problem to Instagram never heard back from the company.

iDB reader Colleen has the same problem. In a comment on iDB, he says:

Ever since my account was hacked by this fruit thing, my hashtags haven’t worked. For 2 months I’ve emailed Instagram about this ongoing problem, and every single one has been ignored. Please have Instagram acknowledge and follow up with this problem.

Clearly, I am not the only one having this issue. It’s also safe to assume that many more users are affected by this problem and probably haven’t even noticed, or don’t care enough to report it.

Of course I checked Instagram Help Center, which doesn’t provide any information at all about this issue. I also contacted Instagram support via the app’s contact form and also via the desktop version of their Help Center. After several emails sent over the course of the last 3 months, I have yet to hear from the company.

At this point, I’m not sure what’s most frustrating: the fact that my hashtags are useless, or the fact that Instagram, the social network I enjoy the most, is ignoring support requests from its users?

I am not a heavy hashtag user, but I do enjoy tagging some of my pictures when appropriate. Not being able to use hashtags has also prevented me from entering photo contests or the Weekend Hashtag Projects the company holds on Instagram every week. As someone who likes things to “just work the way they should,” this is frustrating.

At this point, I would like Instagram to acknowledge the issue and take action to fix it. I usually take to Twitter when I want to rant about something, but given the situation, I thought I’d put it out there on iDB for the world to see. I’m hoping that it may help get the attention of someone at Instagram, since the multiple support request emails I sent them didn’t seem to do much to help my cause and the one of dozens of users.

If you’re unfortunately in the same situation, please feel free to leave a comment and share your experience.

UPDATE: Instagram co-founder Mike Krieger took the time to leave a comment below and tell me that my account has now been fixed and the company is looking into other accounts that were affected:

Hi Sebastien, Mike (co-founder of Instagram) here. Your account should now be working normally, and we’re taking a look to see which other accounts are affected.

Thank you to my guardian angel at Facebook who got things back in order for me. Now let’s hope everybody who has encountered this issue will be taken care of.