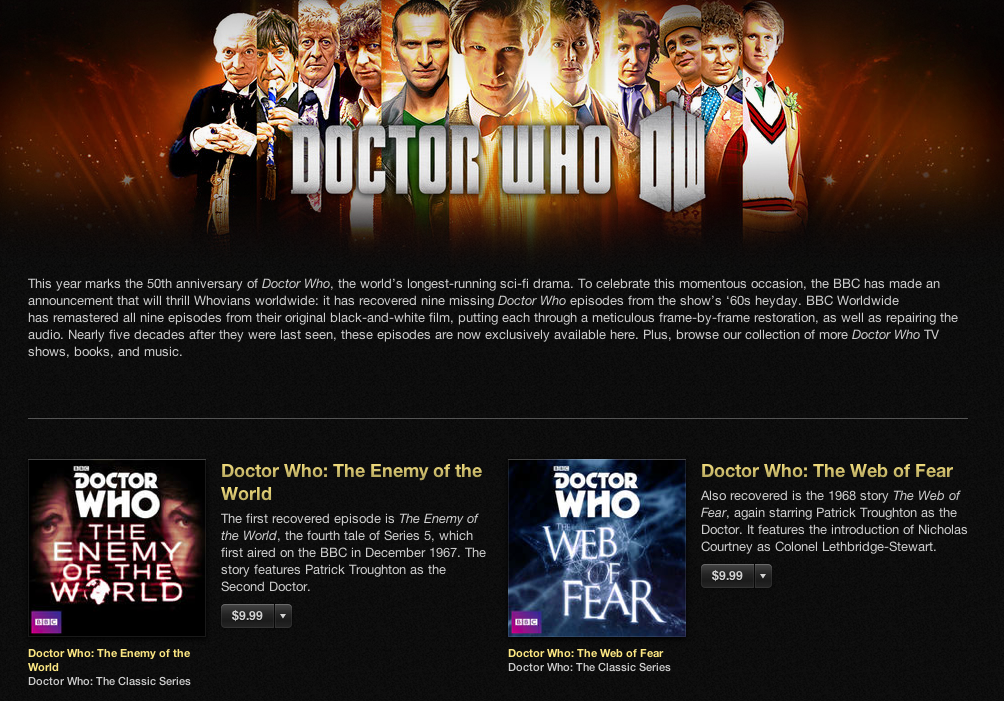 The British Broadcasting Corporation (BBC) announced on Friday that nine long-missing episodes of Doctor Who have been discovered. All of the episodes date back to the Patrick Troughton years and include two stories from the Second Doctor’s era – The Enemy of the World and The Web of Fear.

Nearly five decades after they were last seen, these episodes have been digitally remastered and made available for rent exclusively through iTunes…

Produced by the BBC, Doctor Who is a science-fiction television drama which follows the adventures of a Time Lord, a time-traveling humanoid alien known as the Doctor.

For the uninitiated, Wikipedia has more.

This year marks the 50th anniversary of Doctor Who, the world’s longest-running sci-fi drama. To celebrate this momentous occasion, the BBC have made an announcement that will thrill Whovians worldwide: it has recovered nine missing Doctor Who episodes from the show’s ’60s heyday.

BBC Worldwide has remastered all nine episodes from their original black-and-white film, putting each through a meticulous frame-by-frame restoration, as well as repairing the audio.

The BBC noted in a blog post that both stories star Patrick Troughton as the Doctor plus Frazer Hines as Jamie and Deborah Watling as Victoria.

The Web of Fear introduces the much-loved character Alistair Gordon Lethbridge-Stewart (later known as the Brigadier) whilst The Enemy of the World is unique insofar as Patrick Troughton also stars as the story’s main villain – the evil Salamander.

The Enemy of the World first aired on BBC One in December, 1967.

Episodes 1, 2, 4, 5 and 6 of the six-part series had long been missing, but the BBC have managed to uncover the originals from its archives. Likewise, episodes 2, 4, 5 and 6 of The Web of Fear have also been recovered, meaning that aside from episode 3, this adventure also exists in its entirety.

You can access these episodes by clicking the following iTunes URLs:

Apple has secured these episodes so don’t expect releases on DVD until after Apple’s exclusive digital distribution rights expire later this year.