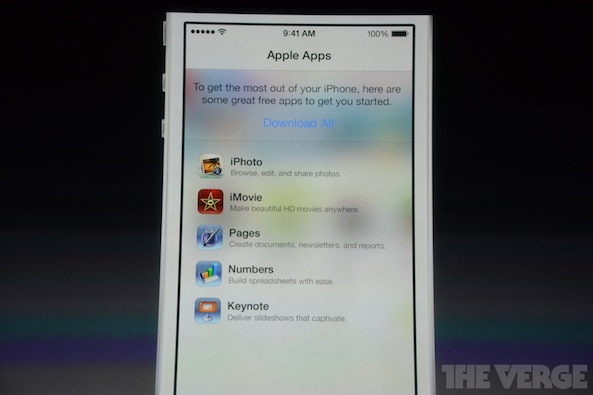 During its big iPhone event back in September, Apple announced that anyone who purchased a new iOS device after September 1 would be able to download iPhoto, iMovie, and the iWork suite of apps—Keynote, Pages, Numbers—for free.

Making good on its promise, Apple began sending out emails with iTunes credits earlier today to those who purchased both new iOS devices and one or more of the above-mentioned iOS apps prior to the announcement on September 10…

9to5Mac has the email:

On September 10, 2013, Apple announced that iPhoto, iMovie, Keynote, Pages, and Numbers iOS apps are now available as a free download on the App Store for qualifying iOS 7 compatible devices activated on or after September 1, 2013.

Our records indicate that you purchased one or more of these apps on or after September 1, 2013 so we have provided you with the iTunes code below in the amount of $5.34. This credit can be used towards the purchase of any content on the iTunes Store, App Store, or iBooks Store.

Detailed instructions for redeeming the code can be found at http://support.apple.com/kb/ht1574.
Code: [redacted]

Thank you and we hope you enjoy using this credit towards your next purchase on iTunes.

The refund can be claimed via the included redeem code by navigating to the bottom of the App Store’s Featured section. Obviously the credit amount will vary from user to user, depending on which apps were purchased during the window.

Pages, Numbers and Keynote normally run $9.99 a piece, while iMovie and iPhoto are priced at $4.99 respectively. Combined, that’s a total savings of around $40 for those who qualify—not bad.