Fitbit’s health and fitness trackers are well regarded by fans of wearables. The San Francisco startup has managed to win over the active types with its Flex wristband, Zip and Fitbit One activity trackers and today they’re adding another gadget to its lineup: the Force fitness tracker.

Slap it on your wrist and the Force will dutifully record the steps taken, distance traveled, stairs climbed, calories burned and active minutes. It also measures the quality of your sleep (how many times you wake up) and has a nice built-in OLED display to show time and, soon, incoming call notifications…

The Force syncs with your iOS/Android mobile device or Mac/Windows PC via power efficient Bluetooth 4.0 technology, making it compatible with the iPhone 4s/5/5s/5c and the third-generation iPad and later.

The device analyzes your current stats to automatically issue motivational reminders to keep you exercising throughout the day, a killer feature for a couch potato like myself. You will also love stats sync with major third-party apps like DigiFit, MapMyRun, Endomondo, TicTrac, Foodly – even About.me – and lots of other apps. 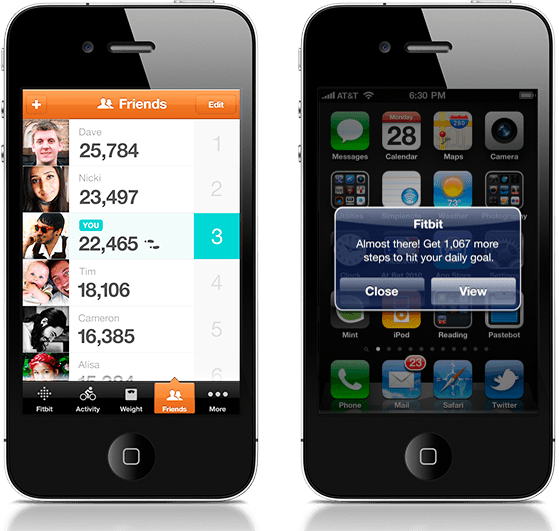 The Force has a silent alarm that gently vibrates and packs in a bunch of sensors such as accelerometer, pedometer and altimeter. Of course, it wouldn’t be a typical wrist-worn device without a built-in watch. If you’re wondering about incoming call notifications, Fitbit says the feature will be enabled through an upcoming firmware update (iOS 7 will be required).

The nice thing about the accompanying app is that folks can set their personal goals for daily active minutes and the Force will issue reminders accordingly. By the way, the Center for Disease Control recommends 150 moderate-to-high intensity cardio minutes per week.

Oh, it’s water resistant and has a battery life of 7-10 days.

The Force costs $129.95 and is available in Black and Slate for order today on the Fitbit webstore. The company says the accessory will be available in select retailers in “three to four weeks”.