Ending weeks of speculation, Twitter today announced a new feature that has the potential to take social television to the next level.

Twitter users will soon start seeing a new See It button embedded in tweets that, when clicked, lets folks immediately tune into live programming through their set-top box or a mobile devices such as a smartphone or a tablet.

To replace your remote, Twitter partnered with cable provider Comcast and its fully-owned subsidiary NBCUniversal, giving Xfinity customers the ability to also schedule DVR recordings on-the-fly, directly from Twitter. The feature will debut with NBCUniversal offerings including The Voice and Sunday Night Football.

Go past the fold for the full reveal…

Xfinity customers can change the channel, set the DVR and play a show on-demand, directly from an expanded tweet, the micro-blogging startup wrote in a blog post.

Twitter’s real-time nature makes the See It feature even more powerful because it gives customers a way to instantly tune-in to a live show right from Twitter – something that’s never been done before.

But what happens if I’m not an Xfinity customer?

Easy, clicking the See It button will take me to the NBC website or their app smartphone/tablet app. Tweets with See It buttons will be available for shows on multiple networks.

Comcast’s media release explains that it will be working with other players to make See It technology an industry standard. From the onset, See It was designed to integrate with other video distribution partners, television networks and websites.

Other networks, video distributors, websites and apps “are already interested in getting on board” so “in early 2014, we’ll also add other video distributors to See It,” says Comcast. Another aspect of the partnership includes an advertising deal between NBCUniversal and Twitter’s Amplify program for near real-time video highlights of events or shows.

They’re also toying with incorporating Twitter trending data for top shows and movies into the X1 platform on TVs “so our customers could directly tune in with their remote to the top buzzing shows on Twitter,” though that’s just an idea at this stage.

The See It feature will start rolling out on Twitter next month.

This is just the first step toward realizing the social television vision.

Twitter has been experimenting with a bunch of ideas to appease to advertisers ahead of its IPO. See It changes the game by seamlessly moving those eyeballs from that conversation to content consumption, allowing for better ad targeting while giving networks and broadcasters more quality engagement stats.

This makes lots of sense considering Twitter is the prime source of real-time television engagement data. For example, more than 200 million active Twitter users send more than half a billion tweets on any given day. Converting those TV-related tweets into actual viewing should help drive ratings and engagement with viewers. 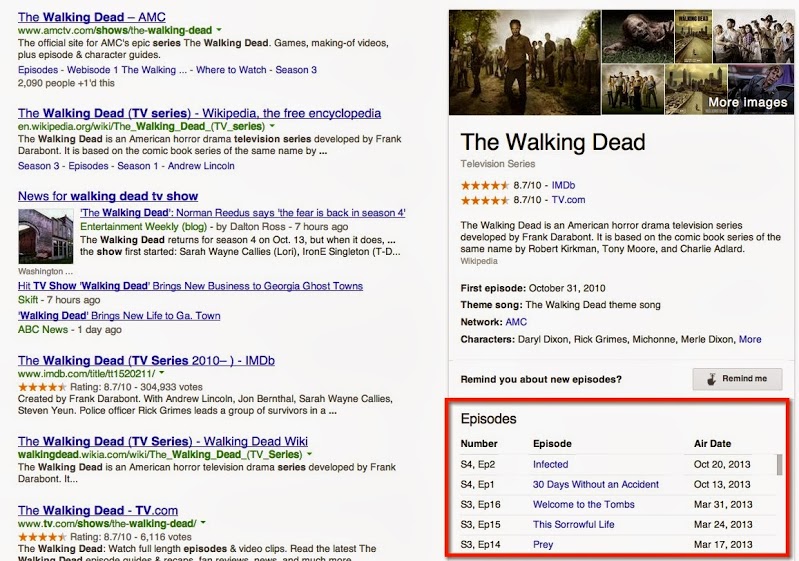 I’m curious as to how the likes of Facebook and Google respond.

If it means anything, in countering Twitter’s TV-focused move the Internet giant Google yesterday added TV show episode listing to its search results, as depicted on the above screen.

For example, go to google.com on your computer and try searching for ‘the walking dead tv show’ and you’ll see all episodes listed along with their air dates. You can also click on the individual TV show episode for a synopsis.