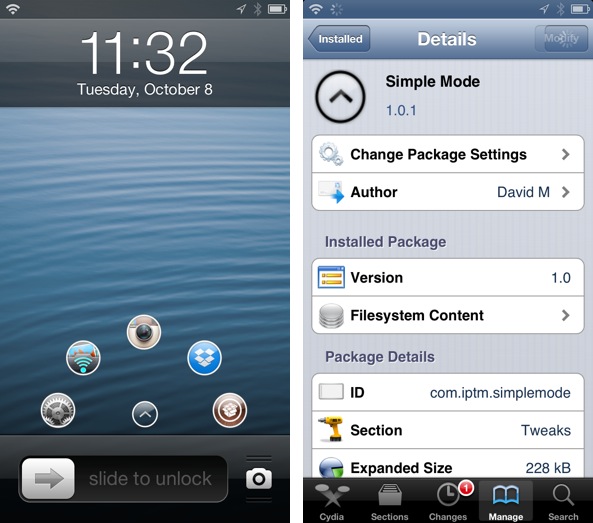 I know what you’re thinking. “But Jeff, we don’t need any more walkthroughs of Lock screen launchers, we’ve already been inundated with them.”

To be honest, I thought the same thing.

Well, you’ll be happy to know that Simple Mode, although it falls firmly within the genre, adds an original flavor to the typical Lock screen launcher. Simple Mode will actually learn your app usage patterns, and adjust the apps available on your Lock screen automatically.

Instead of having to go into the tweak’s settings and arbitrarily select five apps that you’d like to appear on your Lock screen, you can simply use your device like normal. Eventually, your Lock screen will be populated with app shortcuts that you’ll actually use, because, surprise, you already do.

Simple Mode includes a provision to automatically launch a specified app upon unlocking your device, but I was unable to get that working. I’m going to go ahead and chalk that up to it being a 1.0 release, and hope that developer David M can get it fixed in a future update.

Simple Mode is a tweak that you should take a look at if you want something that places an interesting twist on the traditional Lock screen launcher. It’s not perfect, and does feature bugs, but I’m fairly confident that those will be ironed out as time goes on.

You can find Simple Mode on Cydia’s BigBoss repo for $1.99. Share your thoughts on it in the comment section below.