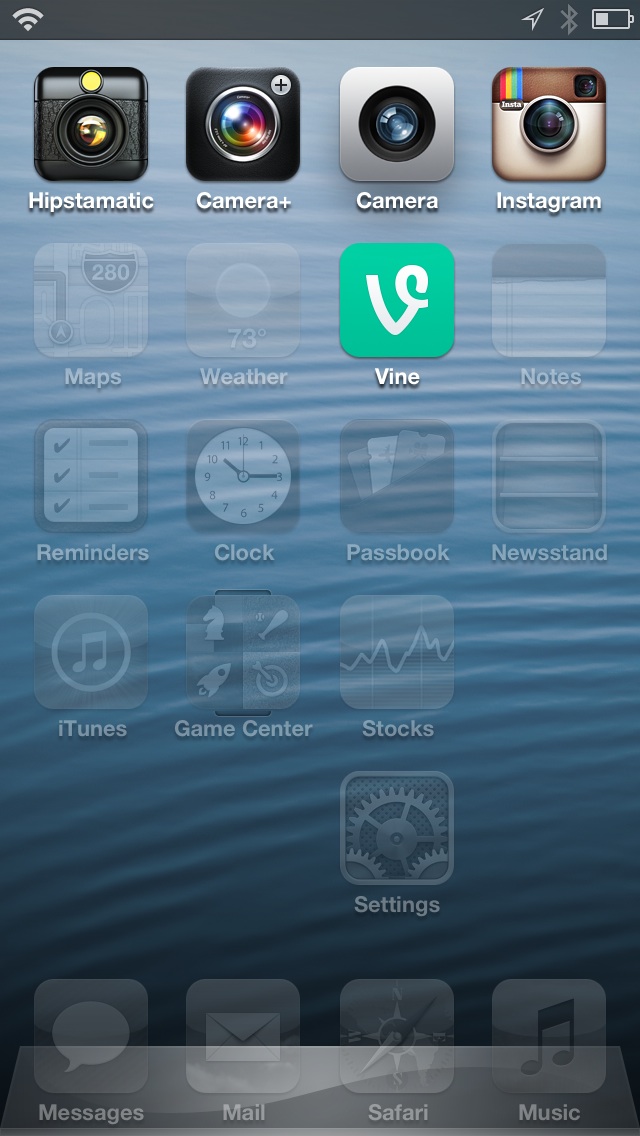 One of the best jailbreak tweaks to touch down in some time is now available for purchase on the Cydia Store. I’m referring to Apex, the new jailbreak tweak collaboration from A3tweaks.

Apex is an innovative new release that allows you to group sets of app icons together, and reveal each individual app using a swipe up or swipe down gesture. This means that you can have what appears to be a single app on your Home screen, when in all actuality, it’s hiding up to four additional apps.

Apex is a great way to get by without using folders. It allows you to quickly group items together, and launch them just as fast using intuitive gesture commands. Have a look inside at our full video walkthrough, as I explain why this is a must have jailbreak release for you.

At its core, Apex is a simple tweak that really only does one thing — allows you to group apps. That in itself is a fairly simplistic premise, but the tweak gets fairly complex when it comes to rendering the way those elements look on the Home screen.

Instead of just opting to dump a whole group of apps on the Home screen, meticulous detail was paid to how the apps are grouped together. With Apex, up to four apps can be mated to another app at any given time. You don’t necessarily have to use four apps, that’s just the limit for the amount of apps that can be grouped to another.

When looking at Apex, I’m sort of loosely reminded of how electrons surround a nucleus. The nucleus, of course, being the primary app that’s used to group the other four apps, and the electrons being any one of the apps designated to mate with the nucleus app.

This analogy makes more sense when you gather how the mated app icons “stick” to the primary app icon. No matter where the primary app is located on the Home screen — whether it’s the top left-hand corner, bottom right-hand corner, or somewhere in the middle — the mated apps find a way to surround the app in a logical order. Watch the video demonstration above and it will give you a sense as to what I’m referring to.

As mentioned, gestures play an integral role in Apex’s functionality. A swipe up or swipe down gesture on any app will reveal four empty spaces where companion apps can be added. The blank spaces where potential apps can be are symbolized by plus signs encapsulated with outlined boxes. 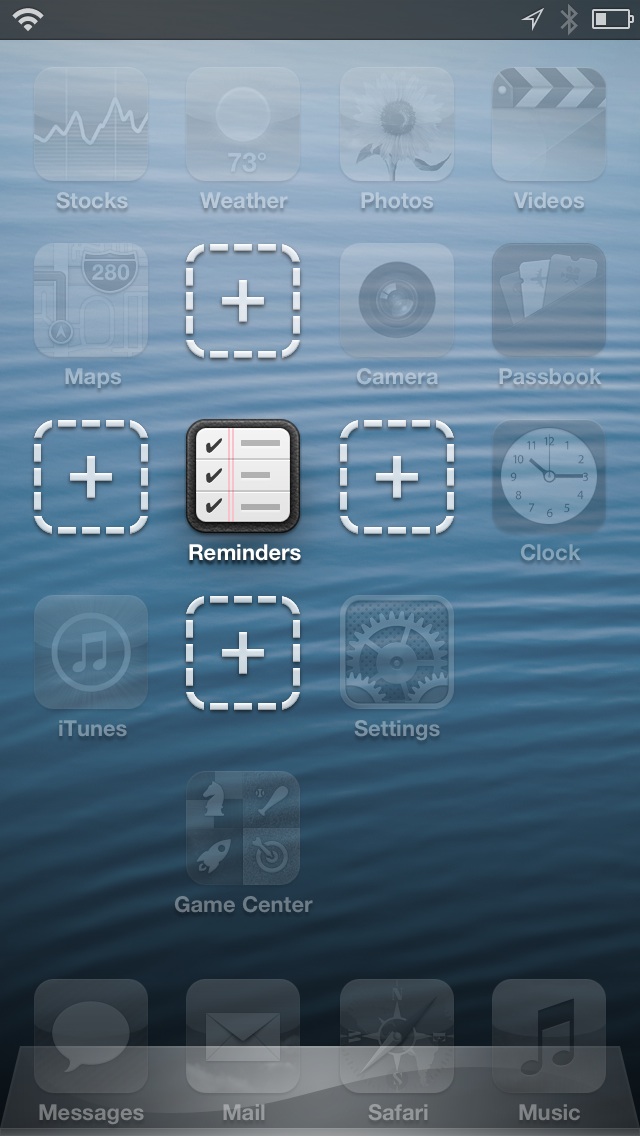 Tapping on the plus sign dims the rest of the screen, and reveals a vertically scrollable interface, which lists all of the available apps present on your device. Once a desired app is situated on top of the box, a checkmark will appear in the upper right-hand corner of the app signifying its selection. From there, a tap of the Home button will lock in the selection, and bring you back to the remaining empty three boxes.

You can stop right there, or continue adding up to three additional apps to finish the group. The developers recommend adding similar apps, for instance, grouping the Camera app with Instagram, Vine, Camera+, and Hipstamatic. This results in a more folder like inventory of apps, that’s convenient, but certainly not required and or necessary to get a lot out of Apex.

Once a group has been settled on, the main app icon that makes up the group can be swiped on at any time to reveal the other apps associated with that group. You’ll be able to tell when an app icon contains a group by the other apps that ever so subtly peek out from behind the primary app icon. If you’re not particularly fond of this effect, it can be exchanged for an even more subtle indicator by means of a handy toggle option in the tweak’s preferences.

Removing apps from groups is basically an exercise in reversing the steps taken to add icons to a group. First you’ll need to swipe on the tweak to reveal its grouped apps, tap and hold on an icon to place the device into wiggle mode, and then tap on the app icon you want to remove. From there, just move the list of app icons all the way to to the top of the list, where the blank app resides, and press the Home button. Written out, the steps seem a bit cumbersome, but it’s really quick and only take a couple of seconds.

The most outstanding thing about Apex, outside of the tweak’s functionality, is its animations. When swiping on a grouped app icon, the animations are quite impressive. The surrounding app icons are pushed out of the way about as elegantly as a push could hope to be. It’s even more impressive when you refrain from a violent flick, and slowly invoke the swipe gesture.

The thing that I’ve always appreciated about A3tweaks is its attention to detail. Sentry, the lead designer for projects that come from A3tweaks, is a stickler for the details; that’s the case with Apex, and any other tweak that falls under the moniker.

It’s not just the function of the tweak that’s impressive, but it’s the way that function is executed. It shows that the makers behind it actually care, and aren’t just after a quick payday (if you can even call it that, given the modest price point of the offering).

I definitely don’t want to sell short the impressive underbody that holds it all together, because coder Aditya KD has produced a tweak that functions just as well as it looks. You’ve got to hand it to Sentry, he knows where to find the talent that can properly pull off the concepts he’s envisioned. 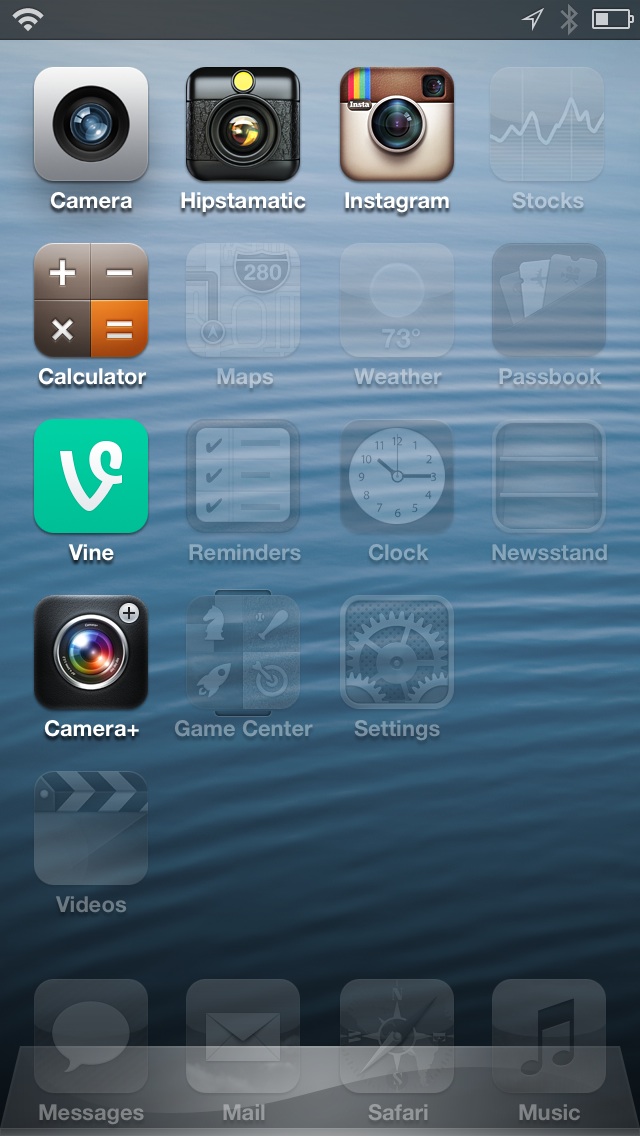 That being said, there is a small bug that I found on 4″ screen devices. The bug allows you to have five app icons grouped to another, instead of the standard four. I’ve confirmed with the developer that this is indeed a bug, and not implemented by design. The bug makes it so, depending on where the primary app icon is positioned, access to one of the five apps may be restricted until the primary app is moved to another location on the Home screen. This bug is certainly not a deal breaker, and it only happens if you intentionally add more than four apps to a group.

Apex is available right now on Cydia’s BigBoss repo for a very reasonable $0.99. The developer is now working on a bug fix for the issue mentioned above, so it should be resolved in due time. If you decide to take it for a spin, be sure to share your thoughts about the tweak in our comment section down below.