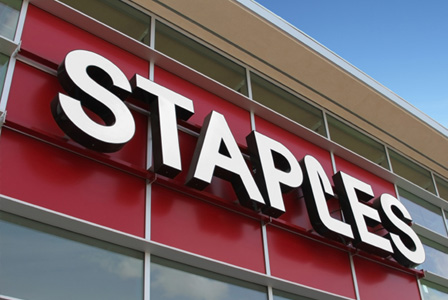 In another sweeping showing of Tim Cook’s operational expertise and penchant for cutting deals, Apple is now rumored to be expanding the iPad’s reach soon by bringing the device to the United States office supply retail chain, Staples. Talk of Staples gearing up to sell iPhones, iPads and Macs dates back to early-March of this year.

That’s when MacRumors leaked internal training documents which indicated that at least some Staples locations would start selling a broader range of Apple products, including Macs, iPads and iPhones.

Mark Gurman, citing a source with knowledge of the deal, writes in an article over at 9to5Mac that iPhones and iPads should be expected via the U.S. Staples Online Store as soon as next Tuesday, October 1.

Staples will also install in-store kiosks to promote the iPads at its brick-and-mortar Stateside locations during the next few months.

But, the company “has greater aspirations,” writes Gurman.

The retailer is ostensibly shooting to start selling the Apple tablet directly from its physical outlets next year, but there’s a catch – Staples will reportedly need to refer a certain amount of online iPad sales to its customers weekly until the end of 2013.

The source says that if each Staples store refers one iPad sale per week in October, two per week in November, and five per week in December, Apple will be willing to sell iPads in physical Staples locations.

The deal is a natural progression of Staples’s existing relationship with Apple.

Keep in mind that the the Framingham, Massachusetts-based retailer is currently offering the iPad through its online store in Canada.

We’re expecting refreshed iPads (running newly-released iOS 7.1) to be unveiled next month, probably around mid-October. The Staples deal should be much more than a pretty bullet point on an Apple keynote slide, mind you.