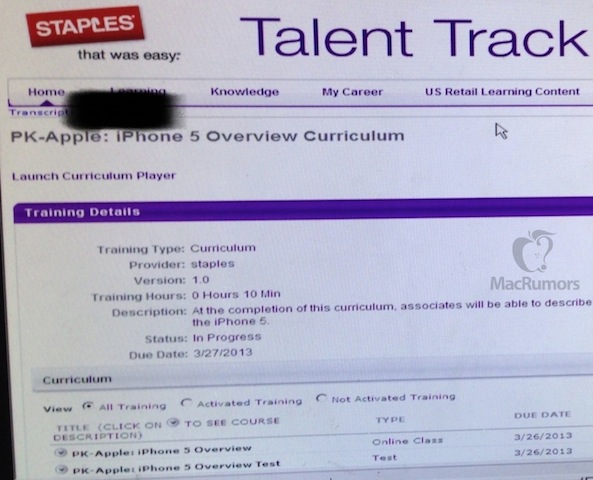 We’ve known for a while now that Apple-friendly peripherals and accessories were headed to US Staples stores. The retailer already sells the products in Canada and internationally. And late last month, they started selling them in their US webstore.

But according to newly leaked internal documents, the stores are going to be offering more than just plug-ins and add-ons. The images, which are believed to be of associate training materials, suggest they’ll be selling Macs and iOS devices as well…

“Apple accessories have already been making their way to some brick-and-mortar Staples stores, with our sources indicating that at least some locations will also be selling a broader range of products, including Macs, iPads, and iPhones.

One source has now shared screenshots of training materials for Staples sales associates, revealing training modules addressing not only the Apple TV currently being offered Staples but also Mac notebooks, iPhones, and iPads. It is unclear if Mac desktops are not going to be carried by Staples or if perhaps those offerings will be limited to certain locations.”

The report makes note of the fact that all of the curriculum addressing the new Apple products are required to be completed by March 26 or 27, suggesting that the rollout of these products to brick and mortar Staples stores is likely to occur shortly after.

You can’t overlook the significance here. Not only is Apple substantially widening its distribution reach—Staples has some 1,500 stores in the US—but it’s also gaining access to tens of thousands of business accounts, where clients tend to order things in bulk.

Needless to say, we’ll likely be hearing more about this in the coming weeks.