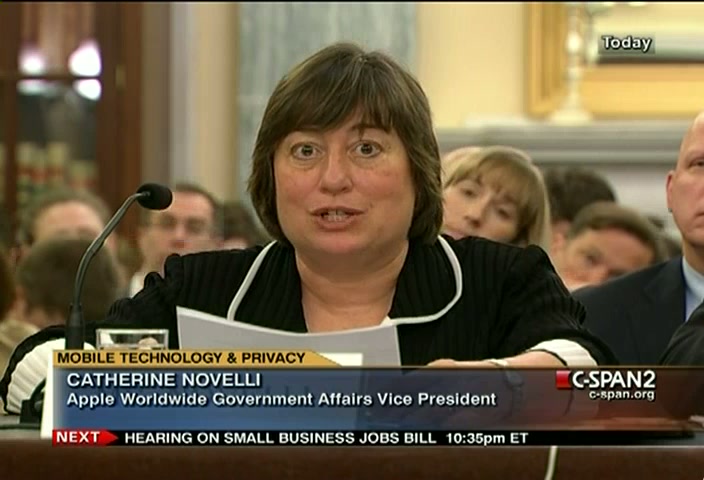 Her title is a fancy combination of words which in clear English means she’s Apple’s chief lobbyist, a job she’s held since 2007. Catherine Ann Novelli is nominated for Under Secretary for Economic Growth, Energy, and the Environment, Department of State…

Catherine Ann Novelli, Nominee for Under Secretary for Economic Growth, Energy, and the Environment, Department of State  Catherine Ann Novelli is Vice President of Worldwide Government Affairs at Apple, Inc., a position she has held since 2007.  Previously, Ms. Novelli was a partner at Mayer, Brown, Rowe & Maw, LLP from 2005 to 2007.  From 1991 to 2005, she served at the Office of the United States Trade Representative and from 1997 to 2005, she was the Assistant U.S. Trade Representative for Europe and the Mediterranean.  From 1985 to 1991, Ms. Novelli served in the Office of the General Counsel at the Department of Commerce.  From 1982 to 1985, she practiced law in the Washington D.C. office of Debovoise and Librman.  Ms. Novelli received a B.A. from Tufts University, a J.D. from the University of Michigan, and a LL.M. from the University of London.