Apple took some criticism yesterday for not announcing any iPhone 5c sales numbers from its pre-order launch weekend. Many pundits took the PR silence as a sign that the plastic handset isn’t selling very well.

But that doesn’t seem to be the case with the company’s flagship iPhone 5s. The phone just became available for advanced reservation in Hong Kong and mainland China, and several models have already sold out… 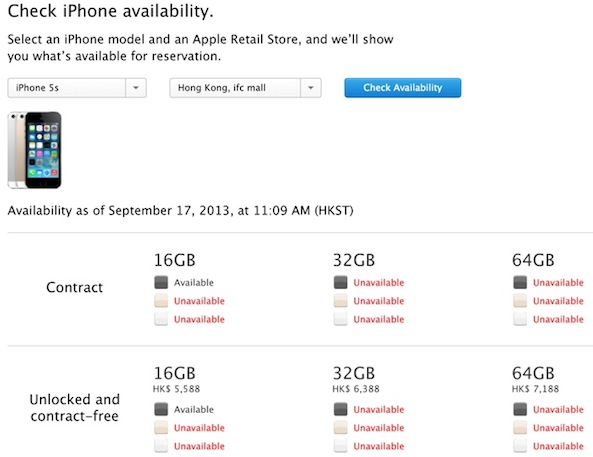 As noted by MacRumors, multiple stores in the country have sold out of all models of the iPhone 5s, though some are still offering the “Space Gray” 16GB. And wouldn’t you know it, the gold version was the first to go.

Reservation users will eventually be asked to enter your name, e-mail, identity card number and other information, and select the September 20 specific to the store pick up time.”

Apple has been using a reservation system in China for while now, in an effort to thwart unruly crowds of scalpers forming outside of stores on launch day. That it’s opened reservations two days early, however, is notable.

The rest of us will have to wait until Friday morning to order the iPhone 5s, or to pick one up from a brick and mortar store. Whichever route you take, make sure you act quickly, as supplies appear to be extremely limited.