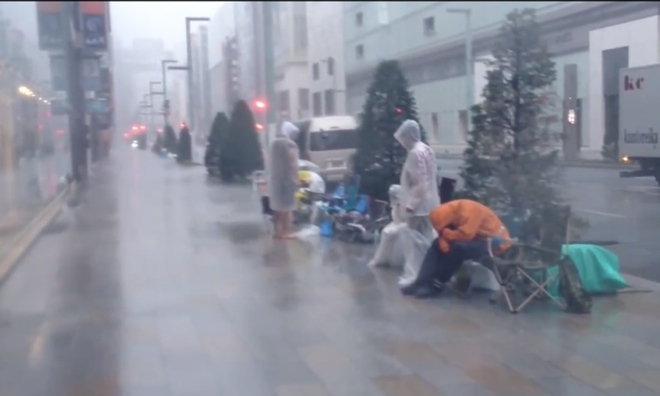 Would you brave a tornado or hurricane to be first in line for Apple’s newest iPhones? That was the situation in Japan, where Tokyo consumers camped out in front of the local Apple Store ahead of Friday’s iPhone 5s/5c launch. Luckily, Apple employees let the fans inside just before a typhoon struck.

Along with shelter from the storm, drenched fan boys and girls were given complimentary water, according to a local report. Customers were “so moved” by Apple’s gesture, according to a YouTube user who uploaded a video of the weather. Japan’s largest carrier NTT DoCoMo becomes the latest provider in that country to sell the Apple smartphone…

“I was so moved how Apple treats its customers,” the Japanese publication Kotaka quotes the YouTube user AppTaylor. The addition of DoCoMo to the list of carriers in Japan offering the iPhone has ignited a price war, prompting rivals to offer a free subsidized entry-level iPhone when new customers sign up.

Before anyone starts sending Apple Valentine’s for its humanitarian efforts in Japan, recall that in the U.S., Apple has limited preorders of the new iPhones to the iPhone 5c.

To be among the first to buy an iPhone 5s, however, you’ll still need to line up in front of an Apple Store, providing the necessary publicity images.

Shelter from the storm?

But do away with manufactured signs of demand for the iPhone?