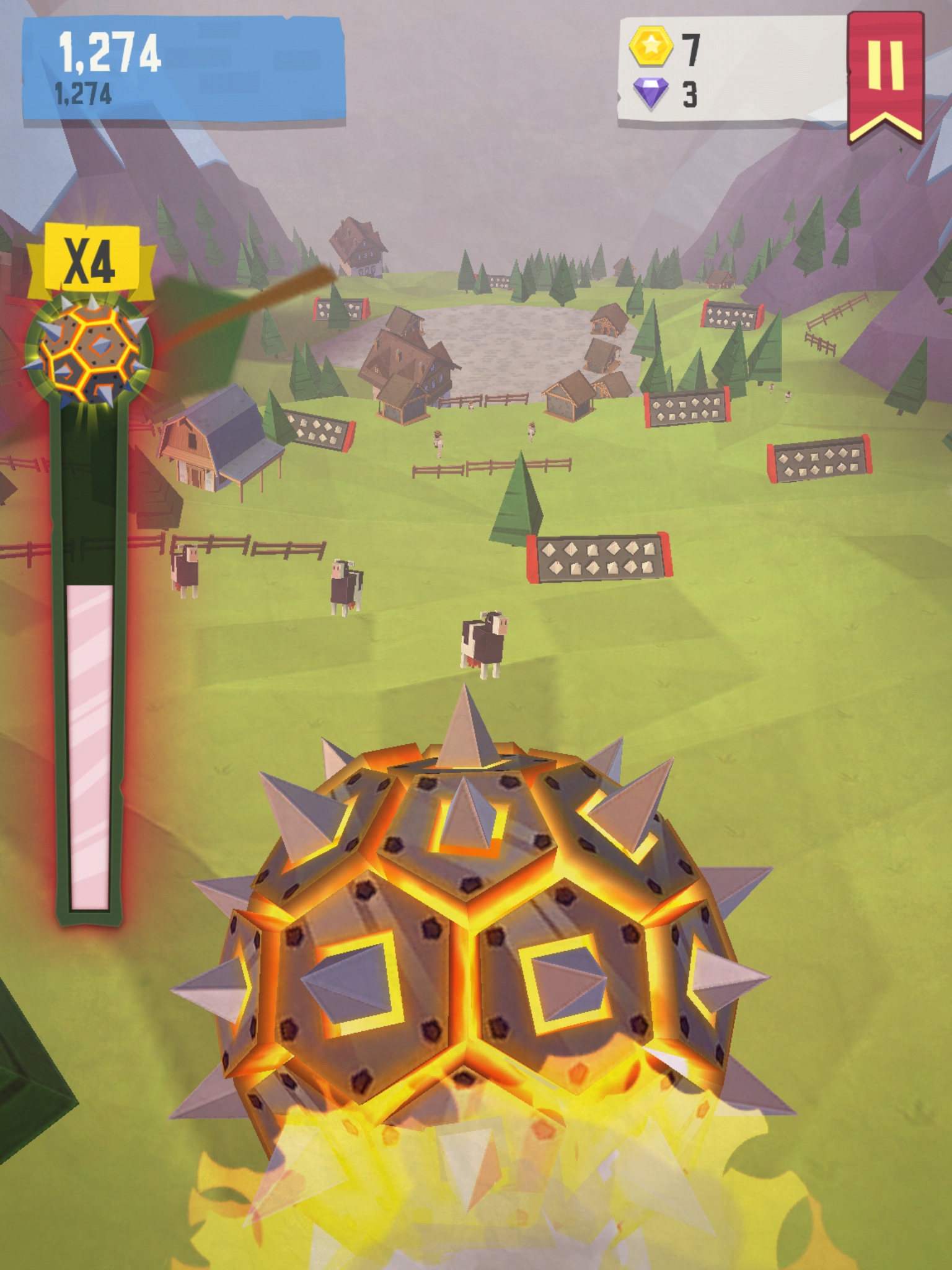 Fans of Robot Unicorn Attack 2 and Monsters Ate my Condo will be happy to know that the games’ creators are back with a destructive new game that is as bizarre as their other titles.

Giant Boulder of Death is an endless runner, or endless roller, if you will, that lets you run down Mounties, crash into Yetis, and destroy idyllic mountain towns…

The game is designed to look like papercraft. All characters are blocky, but not pixelated. Instead, they have smooth features and high-quality graphics. Each one of the funny little characters look like they were painstakingly folded together by a very bored IT support person.

The default controls are tilt-based. Players can also tap the screen to make the boulder jump. You can switch between touch movement and virtual joystick controls, as well. This is a nice option since I personally hate tilt games on the iPad.

Instead of just a catchy tune playing in the background, players are lulled by the relaxing sounds of cows, maids, and yodelers getting crushed to bits by the massive rolling rock.

Between each game, you are subjected to a plethora of screens that will remind you of your current goals, tell you your high score, ask you to connect to Facebook, and try to convince you to buy a spin on the bonus wheel for more stuff.

As you barrel down the mountainside, you will collect coins that can be used to upgrade your boulder, add bonus items to pick up, and make your path of destruction a little bit more fun. 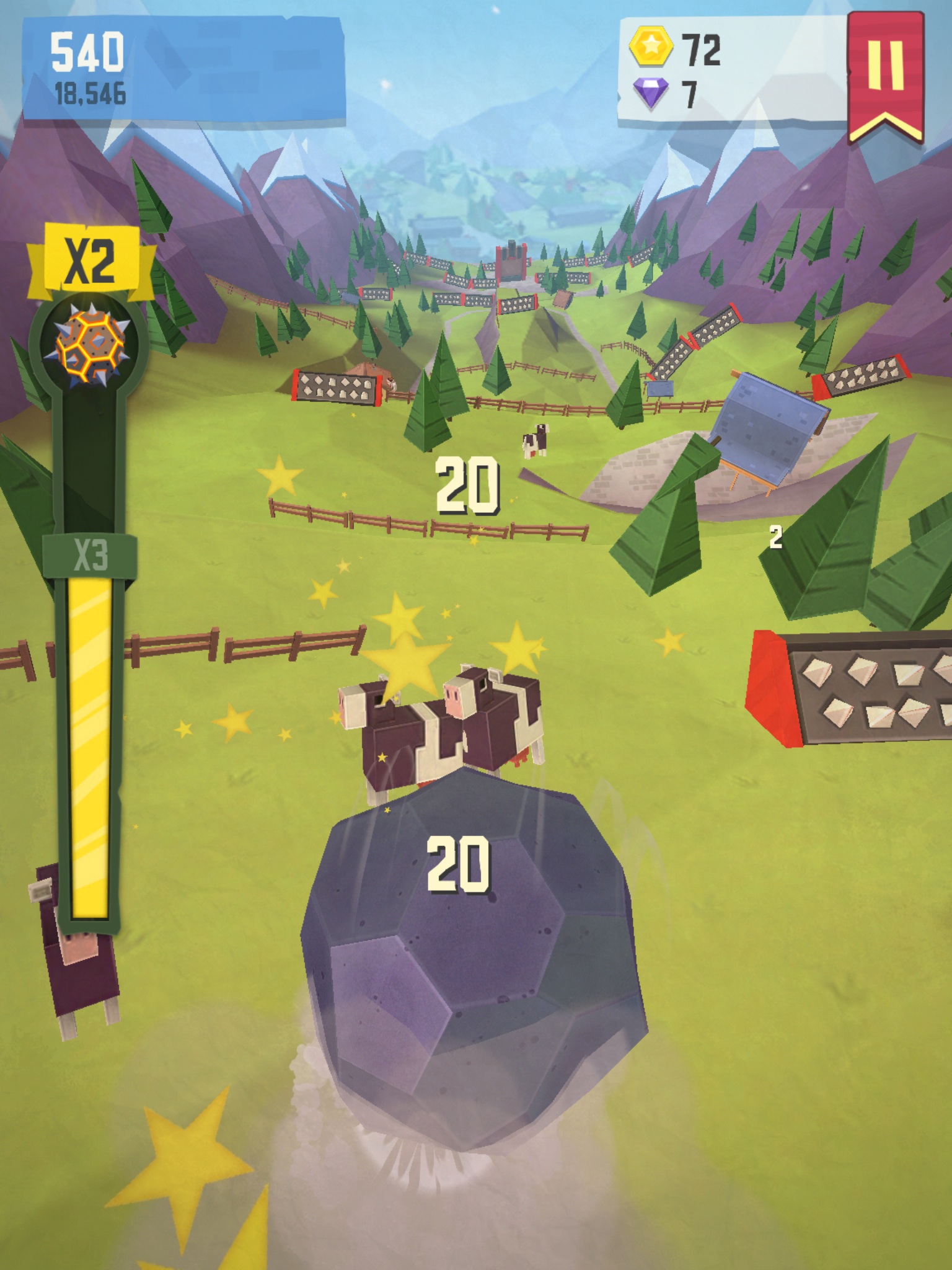 Players control a giant boulder (as the name suggests) as it rolls down a mountainside, crashing into everything in its path. Tilt your device left or right to steer the monolith and tap the screen to make it jump. The goal is to earn as many points as possible while traveling as far a possible.

Points are earned for everything you hit. Lightweight, stationary objects like trees, are worth very little. However, frightened milkmaids and brave Mounties are worth a lot. The best way to earn the most coins is to focus on killing the townsfolk.

As your boulder rolls downhill, you will collect points in your invincibility bar. When the bar is full, the boulder turns into a spiked, armored, death machine. Nothing can stop the “Invinciboulder.” Nothing, except time. Once the effect is triggered, your meter will run down. If you are right in the middle of destroying a mine when you lose the power, it will kill you.

The further you travel down the mountainside, the more difficult the terrain becomes. There are more spikey walls and bottomless caverns to avoid. Plus, mines will come rolling into your path out of nowhere and you can’t run them over without the Invinciboulder.

After you’ve collected enough coins, you can upgrade your boulder’s special abilities. Increase the height of your jump, improve your steering abilities, and make the Invinciboulder last longer. You can also unlock bonus items, like a coin magnet, increased frequency of gems, and a chance that those mines will blow themselves up.

Other than the fun of destroying a town full of people, the game features more than 60 goals. These are not simple achievements. You’ll be tasked with earning high point scores in a single run, traveling further than ever before, and collecting items that are about as rare as a blue diamond.

Some of these goals seem nearly impossible without upgrading your boulder or unlocking bonus items. Unfortunately, coins are not exactly flowing from the mountaintop. It takes a long time to earn enough to upgrade a feature. Then, the cost to upgrade a second time increases significantly. So, it may only cost 250 coins to upgrade the first time, but it will cost 700 to upgrade the third time. Of course, you could buy coins with an in-app purchase, but most people want their free games to stay free no matter what. 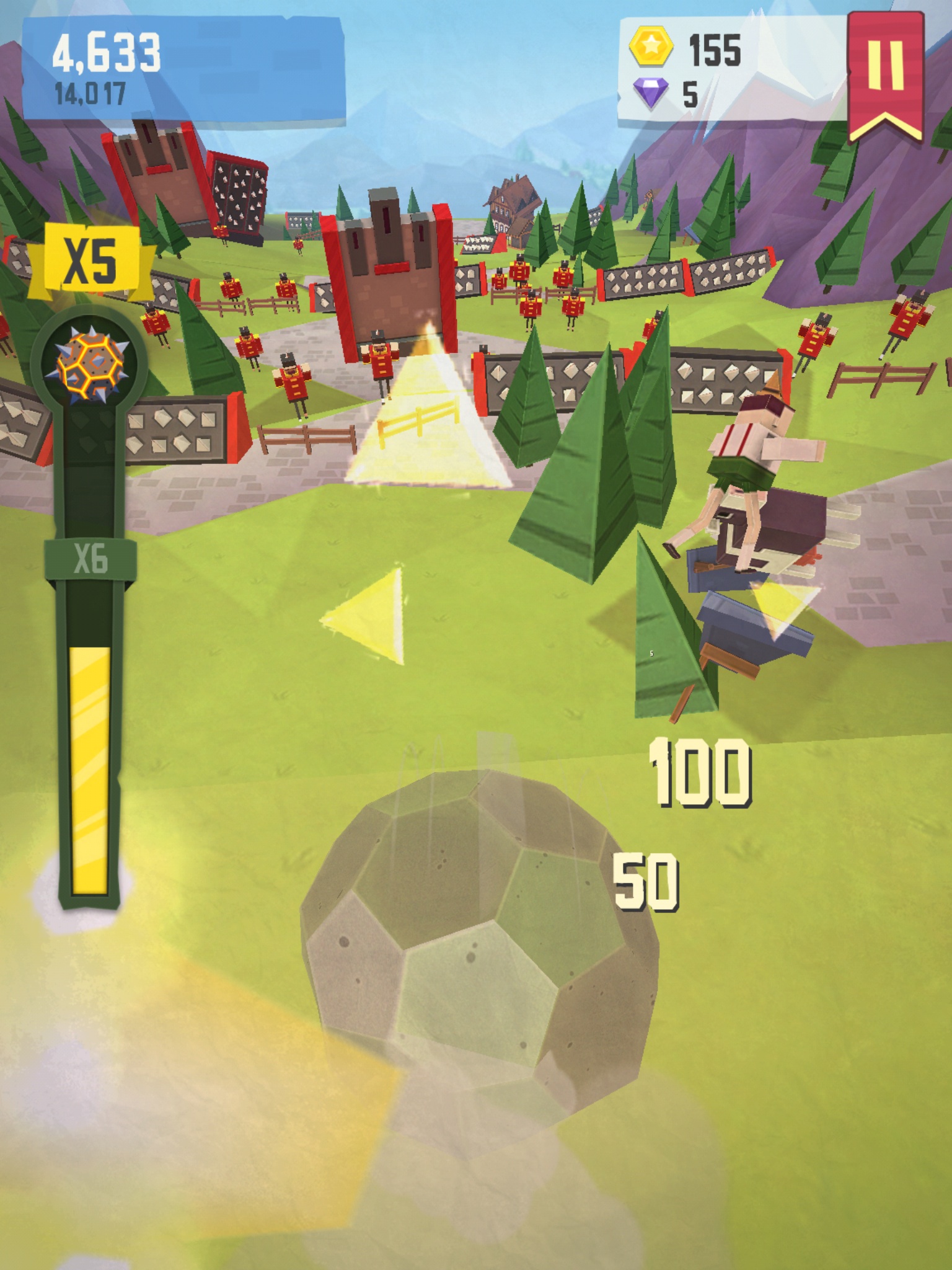 I had a lot of fun running down innocent townsfolk with my giant boulder. The game is lots of fun without making you feel like you have to invest much. You can go on a couple of runs, destroy a few dozen lives, and then go take a nap.

I love the sound of the little cows and people getting smushed under my big rock. It makes the game lighthearted and silly.

I mentioned above that, between each game, there is a series of screens that you must go through before getting back to the play window. This is very annoying. First, you see the game’s high score and your current goals, then have to skip past the request to connect to Facebook every single time, then, you go back to the home screen where you are reminded to upgrade your boulder before playing again, and finally you are given the chance to spend two gems in order to spin for boosts. No matter how short your run is, the same set of screens appear. Sometimes, I wanted to stop playing just because I was sick of being asked to connect to Facebook.

Giant Boulder of Death is free to download, but it is a pay-to-play game. You will regularly be asked to spend coins and gems in order to achieve something. I had a lot of fun without spending any money, but I also never made it past the sixth goal because it was impossible to do without upgrading. If you want to earn all of the achievements in this game, it is going to cost you.

Fans of fun and simple crash ‘em up racing games will get a kick out of this free twist on the endless runner genre. The graphics are great, the game is fun to play and the sound effects will make you giggle. Just be prepared to spend money on in-app purchases because you won’t be able to get far without them. This game is available for the iPhone, iPad, and iPod touch. Download it in the App Store today.

Robot Unicorn Attack 2 is about as weird and quirky as this one. Impossible Road is an endless runner with a round object for the runner. Does that count?