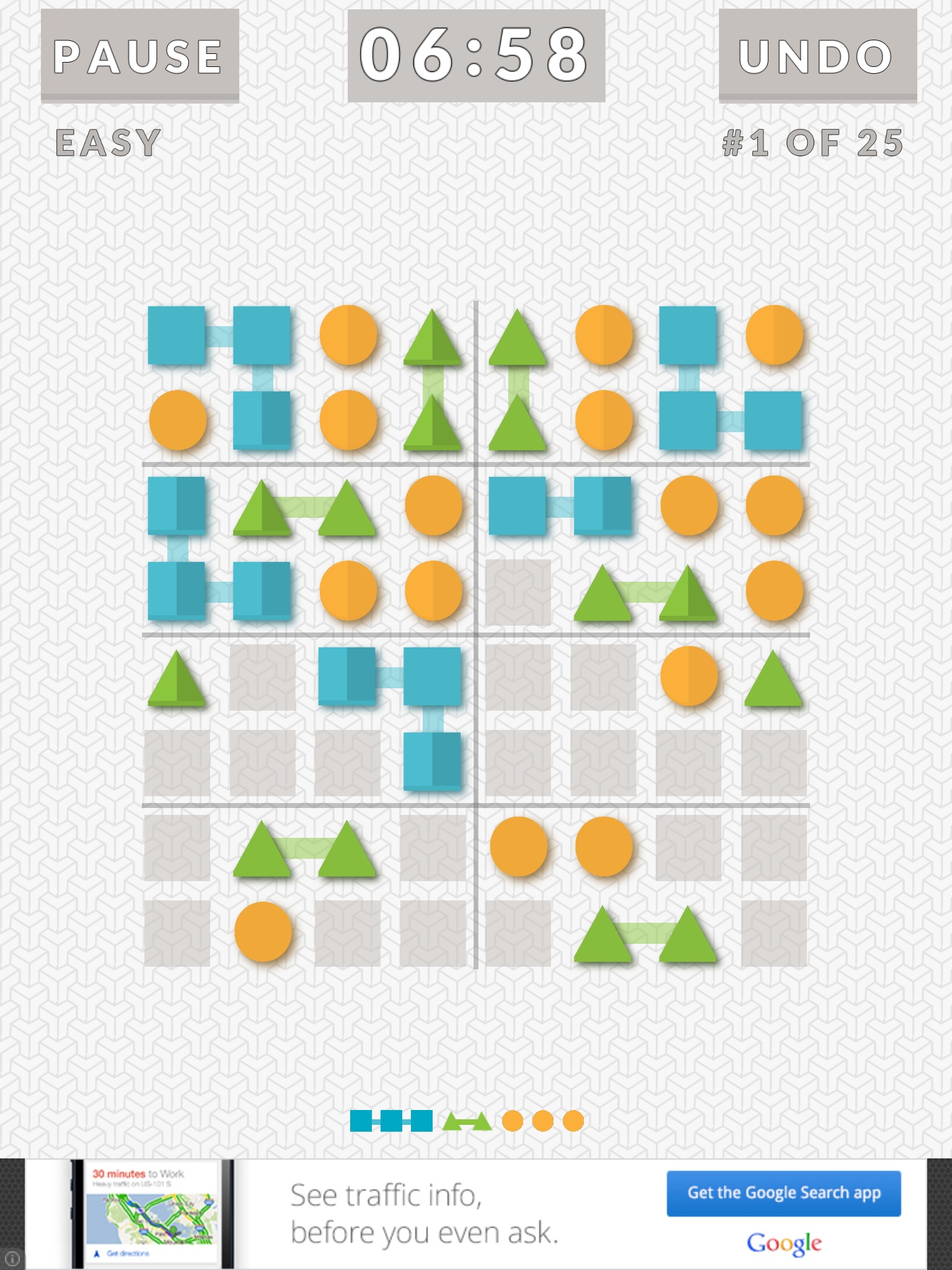 I’ve never been very good at Sudoku. Whenever I try, I get all jumbled up around the bottom few grids. For me, it is because the numbers are so daunting. I see a bunch of numbers and all I can think of is math.

FlowDoku lets you have the experience of solving Sudoku-type puzzles without the intimidation of looking at series of seemingly unconnected numbers. Instead, you solve the puzzles with shapes…

The app features a flat, white design with bright colors, perfectly matched for the iOS 7 mobile operating system. Each shape is represented by a different color. There are four colors and shapes including purple diamonds, blue squares, green triangles and orange circles.

The background music is a pleasant flow of subtle sounds that you might hear at a day spa while getting a massage. It is relaxing and adds to a comfortable ambiance for puzzle solving.

Games are played on different sized grids, including six-by-six, eight-by-eight, nine-by-nine, and 12-by-12. Each larger grid is more challenging than the smaller ones. For each size, there are three different levels of difficulty. So, you can play a six-by-six grid with a difficulty level of Very Easy, Easy, or Medium. Or, you can play a 12 X 12 grid with a difficulty level of Easy, Medium, or Hard. It’s up to you.

There are additional puzzle packs that can be purchased with gems. Each additional pack, which comes with 25 puzzles, costs three gems. So, in addition to the 11 packs that already come with the download of the game, you can unlock three more packs for only $0.99. Or, you could unlock “The Works” for $5.99. 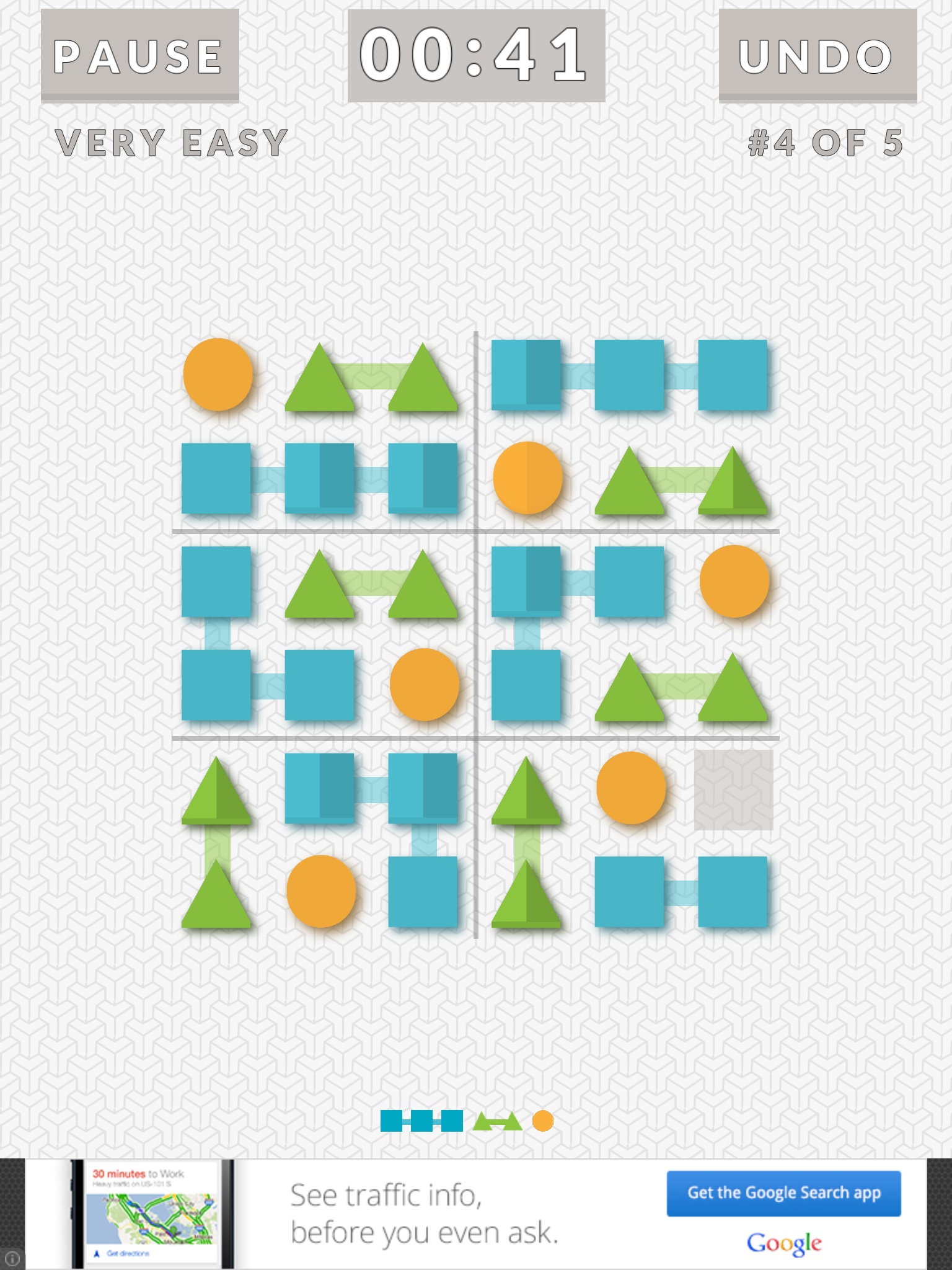 If you are like me and have never successfully completed a Sudoku puzzle, you’ll want to start with a six-by-six grid and choose the Very Easy mode. There are five puzzles in Very Easy, so you’ll feel pretty successful after a short period of time.

Of course, if you are a seasoned vet at the game, or feel somewhat confident in your abilities, you can start the game in a more difficult section. In each grid size, all three levels of difficulty are available with at least one pack in each with all levels unlocked.

When you have selected your grid and level of difficulty, the clock will start. Don’t worry. The clock isn’t ticking down. You are simply being timed. To add a shape to a tile on the grid, tap an open spot. The first shape will be a square. If you want to change it to a triangle, tap the shape a second time. To switch to a circle, tap a third time, and so on.

On each grid, there are a couple of shapes that are already in place and can’t be changed. Each row must have a specific number of different shapes. Each column must be the same. For example, in an Easy six-by-six puzzle, you will need to have each row and column filled with three squares, two triangles, and one circle.

Some shapes must be adjacent to each other. Actually, all of the shapes except the circle must touch another of the same. They can be vertical or horizontal, but not diagonal.

If you make a mistake and add too many of one shape to a row or column, a red box will appear around the incorrect line with a helpful warning that tells you what shape is over the limit. For example, one warning will read, “Column has too many triangles.”

There is an “Undo” button if you place a shape that you realize you don’t want. You can also rollback your entire game until just before the first mistake, reset the puzzle to the very beginning, and reveal a random tile as a hint. Tapping the pause button in the upper left corner will access these additional features.

When you have completed a puzzle, you’ll be able to move onto the next one. Or, you can go back to the main menu and select a more difficult puzzle if you think you have the skills. 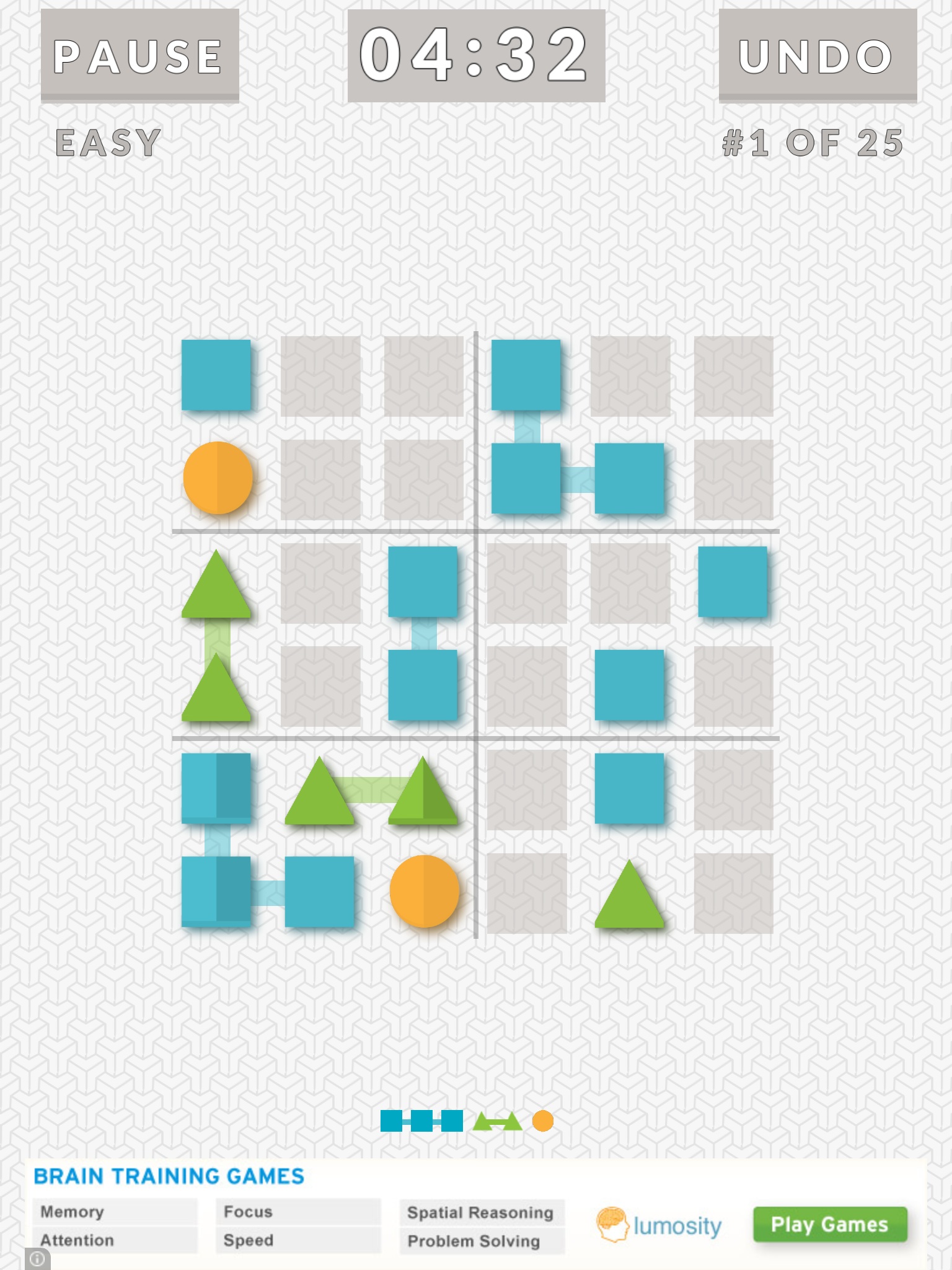 I have never successfully completed a Sudoku puzzle before. I was very happy to have managed to complete quite a few of them with this newly re-imagined version. In fact, I went and played a traditional numbered Sudoku after testing this app because I was so impressed with my new abilities.

It is a great puzzle game for beginners, up to highly skilled players. There is a large selection of puzzles for each level of difficulty on each grid.

I don’t really have anything bad to say about this app. It is a lot of fun, comes with plenty of puzzles for free and it is relatively inexpensive to unlock new packs. The only issue that anyone may have is that it is advertisement supported with a banner at the bottom of the screen. However, any purchase made will remove the ad banner.

FlowDoku can be downloaded for free and comes with a fairly large selection of puzzles without having to purchase more. When you are ready, you can unlock packs of 25 puzzles by purchasing additional gems. For only $0.99, you can unlock 75 more puzzles, which is a very good deal. The replay value is also very high because you can reset your progress and start all over if you want to try to get a faster time on any given puzzle.

If you like Sudoku, give this shape-based game a try for something refreshingly different. If, like me, you’ve never been particularly good at Sudoku puzzle games, you’ll like FlowDoku because it eases your math-related fears by turning numbers into friendly, colorful shapes. This game is available for the iPhone, iPad, and iPod touch. Download it in the App Store today.

Blendoku is another game that uses the basic Sudoku format, but offers puzzles based on colors instead of numbers. Sudoku Supremo offers a variety of Sudoku games, including one that uses pizza toppings.