Remember the concern over the higher-than-expected price of the newly-introduced iPhone 5c?

It was predicted to be Apple’s entry into inexpensive smartphones for China and other emerging nations. Now comes news Apple may indeed have a low-cost iPhone for China: the iPhone 4.

“In an unconventional move for the company, Apple has chosen to keep the three-year-old iPhone 4 on mainland China shelves even after the unveiling of the new flagship iPhone 5s and mid-tier 5c,” writes AppleInsider.

Although Brazil and Indonesia still sell the iPhone 4, China is the only first-party nation offering the smartphone alongside the new iPhones. Apple’s online and brick-and-mortar stores in China sell the iPhone 4 for $423 (2,588 yuan). 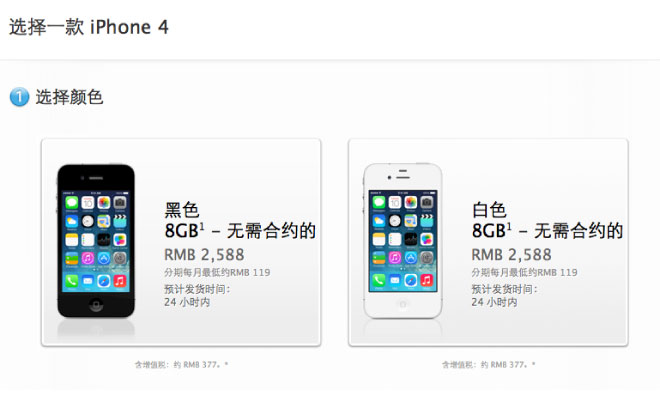 The iPhone 4 in China can also be purchased through Apple via $19 per month installments over two years. The handset is also available through China Unicom, an Apple carrier partner, for $433 (2,648), as well as other authorized resellers.

The belief is that the iPhone 4 offer is not temporary, as a way to get rid of current inventory. Instead, the move is viewed as Apple’s way to enter the mid-tier smartphone market in China without slashing the firm’s profit margin.

Although the iPhone 4 is based on three-year-technology, Apple still keeps its successor – the iPhone 4S – as its bargain option.

Over in the United States, the 8GB iPhone 4S is offered free with a contract, or for $450 unlocked. The iPhone 5c has taken the position the iPhone 4S occupied up until Tuesday and has now become “last year’s” $99 iPhone of sorts, because the handset features virtually the same internals as the iPhone 5, only dressed in vivid colors.