Like every year, this year’s iPhone launch is expected to be the biggest ever for the Cupertino, California firm. Unlike past years, however, 2013 is the first time Apple gets to release two new iPhones simultaneously, one a so-called S-upgrade to the existing iPhone 5 and the other essentially an iPhone 5 with a less-pricey polycarbonate plastic case.

This change in tactics and the resulting flurry of media coverage appears to have renewed interest in the Apple smartphone. And while we’re certainly not expecting lines to stretch around whole blocks like in 2007, campers are already lining up outside Apple’s flagship glass cube store on Manhattan’s Fifth Avenue…

As the media hype machine shifts into high gear, die-hard fans are doing their part to ensure this year’s iPhone release goes down in history as Apple’s most successful product launch ever.

MacRumors passes along an image snapped up by Jon Murphy of Cincinnati-based SellYourMac who along with a colleague arrived on the scene today to set up for a two-week campout, only to find other folks already set up camps outside the iconic glass cube store. 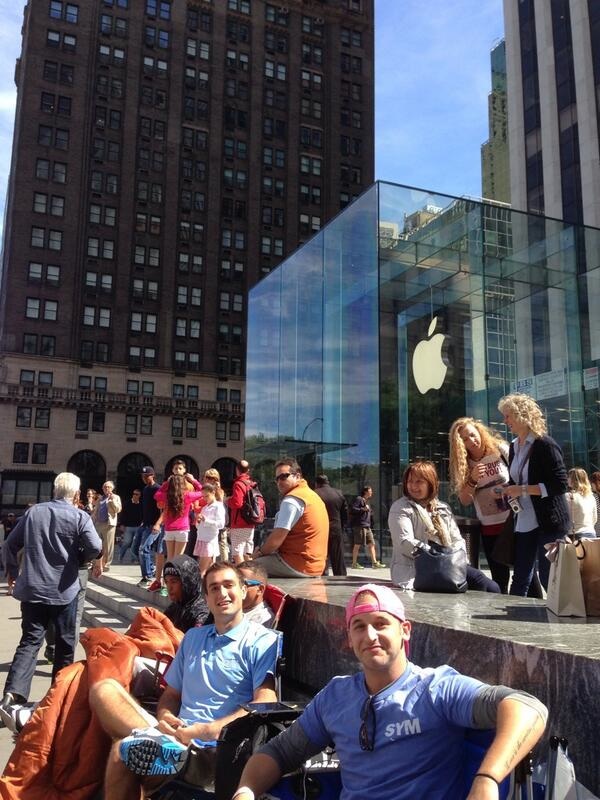 “Two other campers claimed their spots at the front of the line last night, settling in for the long wait,” author Eric Slivka writes. 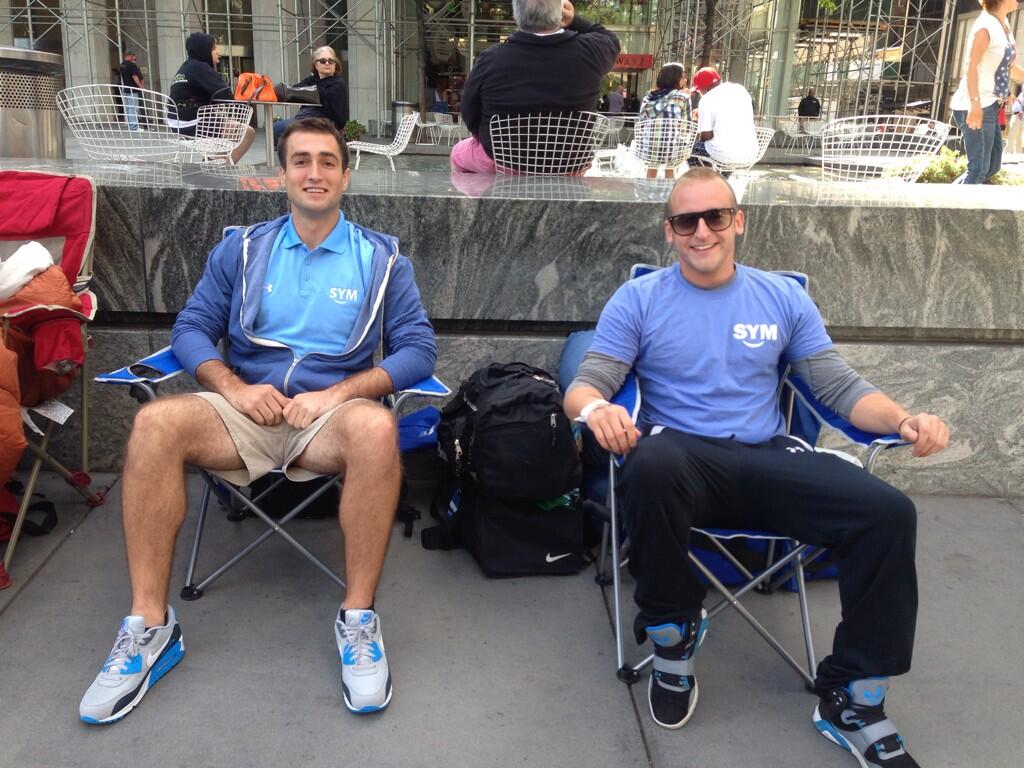 Of course, these guys are in the business of reusing, repurposing and recycling used Apple products so this is a rather nice PR stunt to raise awareness about their company.

And here’s a shot of several other people lining up, via Mac Father. 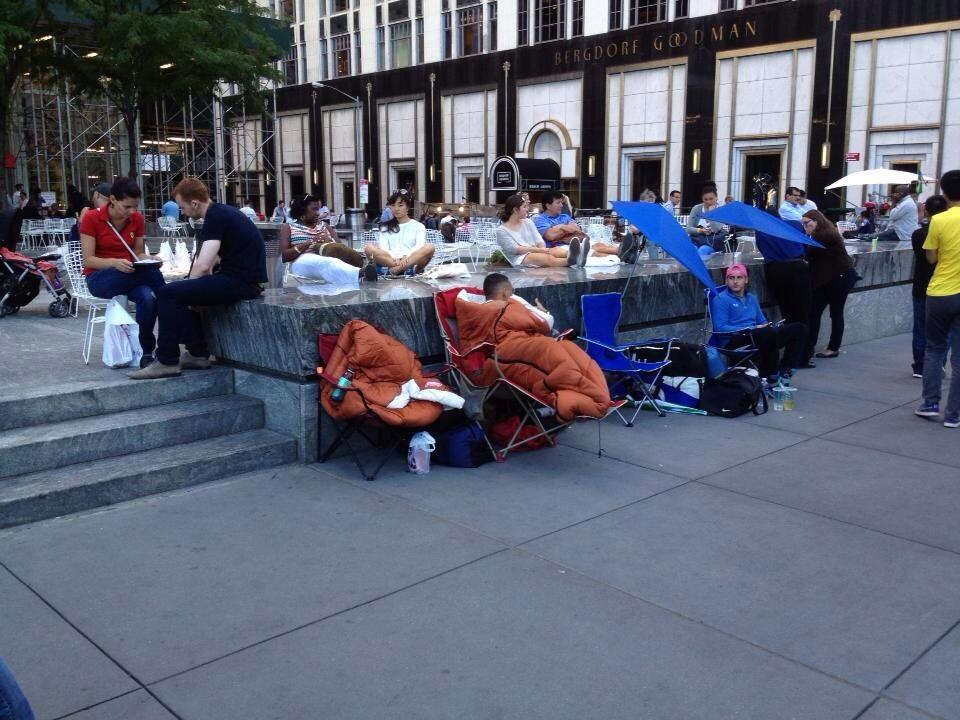 At any rate, camping and standing in line is part of the folklore.

@dujkan @SYM_Jon @SYMJustin What an absolute joke.. These people really need to get some help.. Who has that kind of time? LOL..

On a related note, early line sitters are often being paid to stand in the line. It’s one of the dirty little tricks brands like Apple, Sony and others resort to in order to create a sense of a massive product launch . 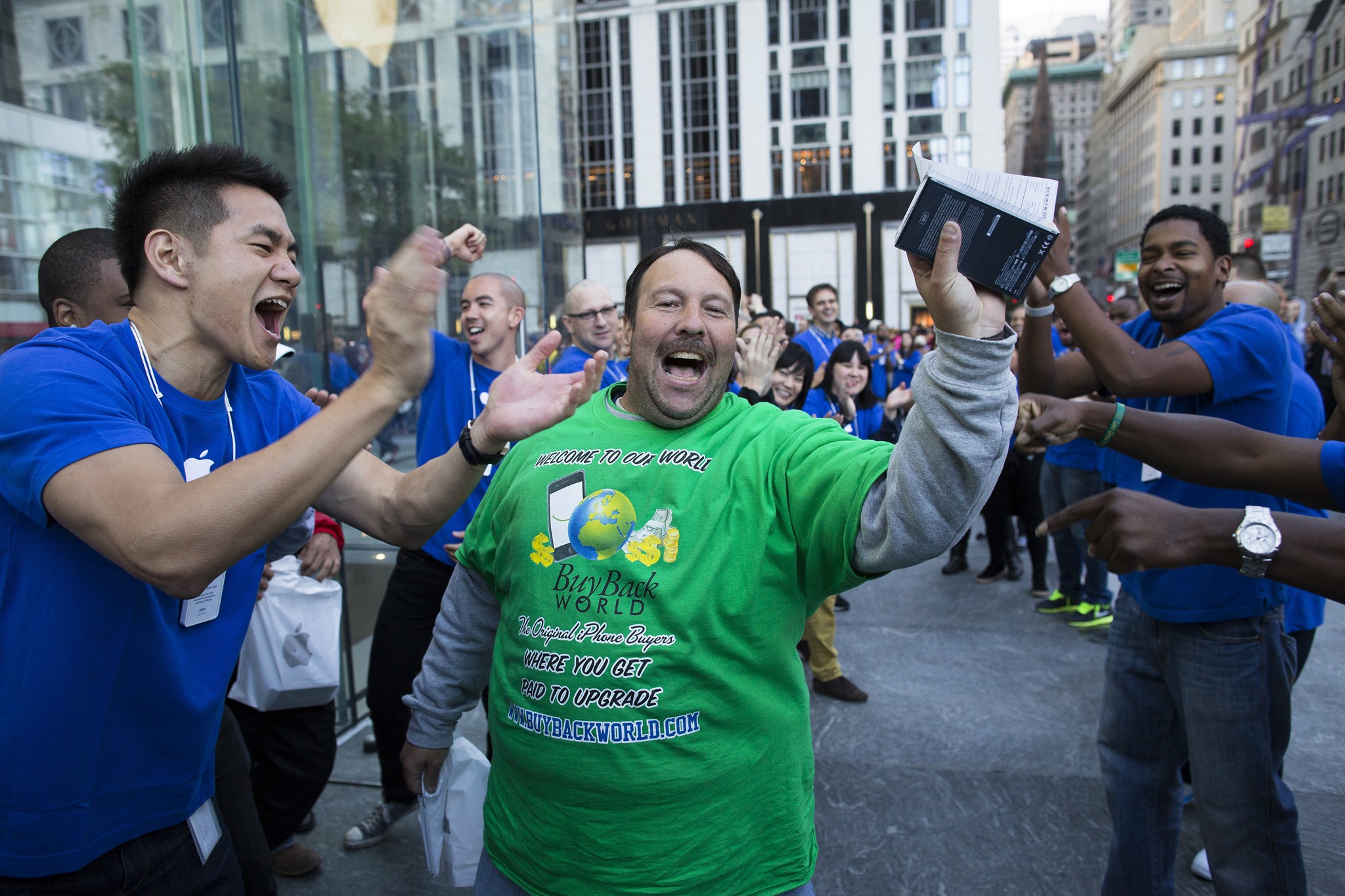 Greg Packer, 49, is cheered on as he celebrates with his newly purchased iPhone 5 in hand outside the Fifth Avenue Apple store, Friday, September 21, 2012. Photo credit: AP Photo/John Minchillo.

That being said – as MacRumors notes – the bar appears to be continually being raised, “with campers now arriving even before Apple has announced anything”.

Apple has scheduled a media event for next Tuesday, September 10. A separate press conference is due on September 11, in Beijing, where pundits expect the formal unveiling of a landmark iPhone distribution agreement with China Mobile, the world’s top telco.

The company is widely expected to announce the iPhone 5S and the mid-range iPhone 5C at both media events, with the first wave of new devices hitting Apple’s key markets ten days later, on Friday, September 20.