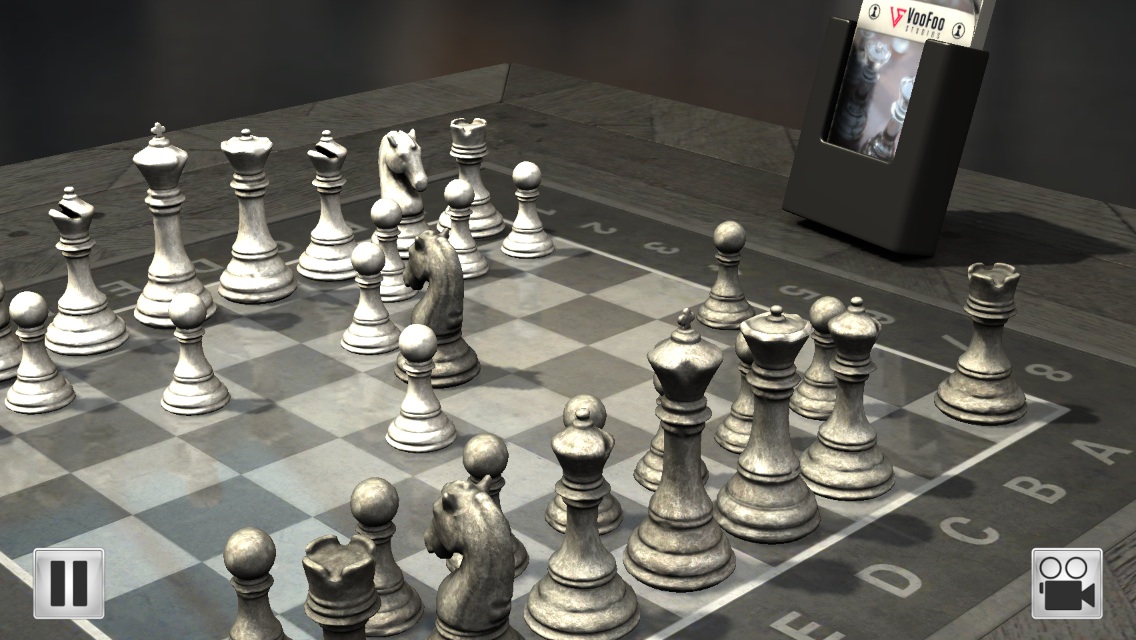 Chess is about a thousand years old. It has undergone only minimal changes to become the board game that it is today. It is played around the world and has even had tomes written about it.

Pure Chess is a new app that features the ancient game. It is designed with hyper-realism, but surprisingly still looks compatible with iOS 7’s anti-skeuomophic theme…

In a time when developers are scrambling to make their apps as flat as possible, this game goes the exact opposite, making its visuals as realistic as possible. The background locations look like they were taken from a magazine advertisement in The Economist. The chess pieces look as though they were carved from stone.

At the same time, the menu screen, load screen, and various setting screens all remind me of Yahoo Weather. That is to say, the font is simple and white and the realistic background blurs out of focus when you are moving between menus.

The game features three different modes of play. You can play locally against another person in the room or an artificial intelligent computer generated opponent. You can play online through the Pure Chess website against cross-platform opponents. Or, you can play in Tournament Mode, where you progress in a campaign to become a Grandmaster chess player. In Tournament mode, you can also play bonus puzzle games where you must complete very specific tasks, like check mating in two moves on a board that has already been set up a certain way. 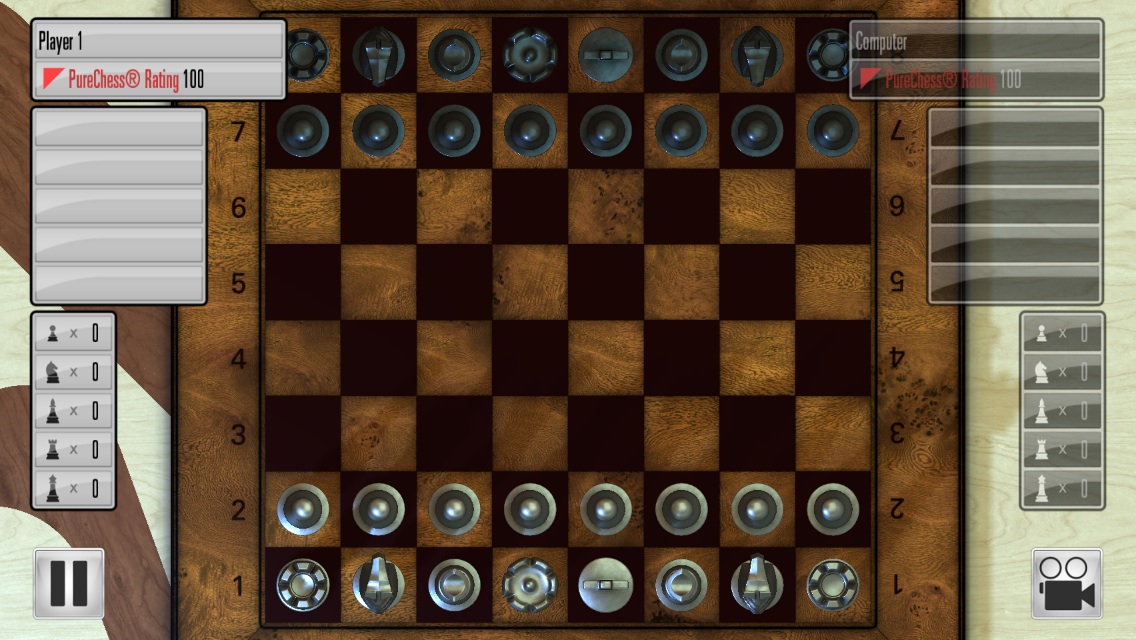 The gameplay itself is nothing more than traditional chess. You have pawns, rooks, bishops, knights, queens, and kings. Each game piece can only move certain directions and has very specific rules. The point of the game is to checkmate your opponent’s king. If you know much about chess, you’ll know that there are planned strategies that will bring you to a checkmate.

If you choose to play local, you can play against a real person in pass-and-play style gaming, or against a computer opponent. You can select whether player one uses white, black, or a random selection of pieces. You can also allow or disallow the ability to undo a move. You can set a timer based on each player’s moves or set an incremental timer. If you are playing against a computer generated opponent, you can set the difficulty level of the AI to two different abilities for free, or six different abilities for $0.99.

Next, you can select the chess pieces you want to use. The game comes with the “Checker” pieces for free. However, you can unlock seven more styles for between $0.99 and $1.99 each. If you don’t want to buy game piece styles, select “Random” and you’ll be able to play with anyone of the eight different selections, you just won’t be able to choose which one. You can also choose between three different locations, the library, the penthouse, and the museum.

If you would like to play online, you must sign up to Pure Chess Online. This will allow you to play against others around the world on any device. The Pure Chess community is cross platform, so you won’t be limited to iOS.

The Chess Challenges section includes the bonus puzzle games and the Tournament mode. The Bonus Games include five different sections. Each section has 20 puzzles. However, only two of them are available for free. You can unlock the whole Chess Challenge section for $0.99.

In Tournament mode, you can play in the beginner campaign for free, or purchase more difficulty levels with the above-mentioned Chess Challenge section unlock.

If you are new to the game, there are 24 how-to tutorials that teach you the basics of the game, including how different pieces move on the board, how to checkmate your opponent, and how to move out of a check. There are 13 additional tutorials that go deeper into the strategies of the game by offering how-to guides for specific tactics, like “The Fork,” “Castling Kingside,” and “What Not to do” at the beginning of the game.

From the description above, you’ll note that there are a lot of different ways to spend money on this game. Although it is free to download, you could end up spending as much as $11.99 to unlock everything. Think of the additional features as a way to buy what you want a la carte. You may only want to unlock the puzzles. Or, you may feel like you are smarter than the AI opponent and want to unlock a computer player with better strategy skills. If you want a variety of visual options, unlock one of the location and game piece packages to be whisked away to an exotic setting. 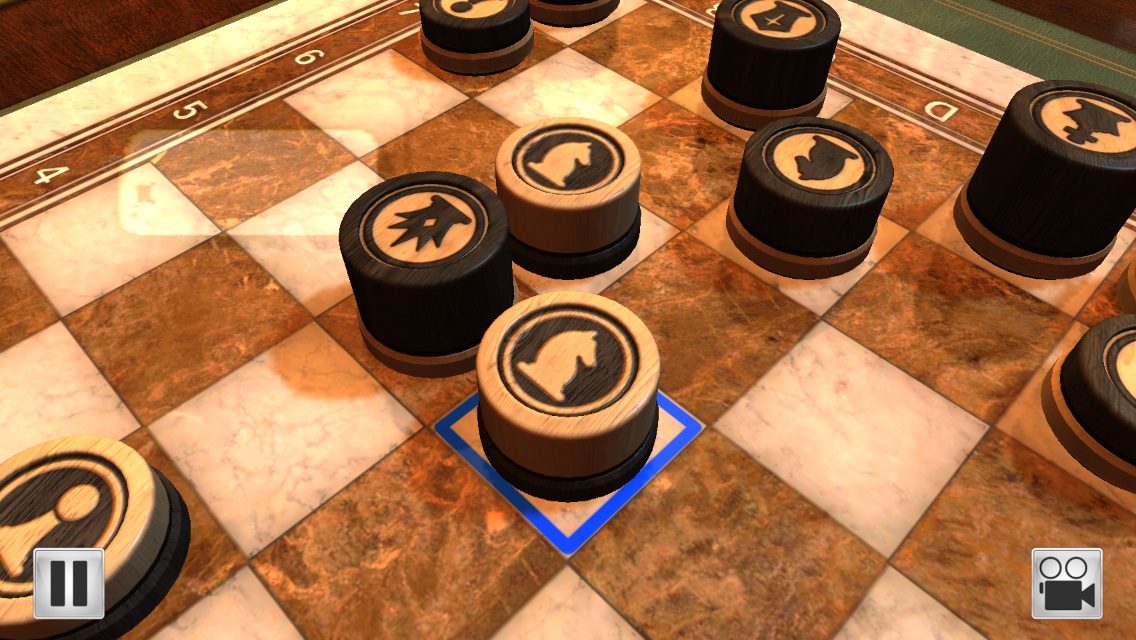 Even in a period of time when flat is the new black, I love the way this game looks. It has a classy design and makes me feel like I’m sitting in some exclusive club or something. The game’s developers were smart to mix hyper-realism with a iOS 7 compatible menu screen. It gives a traditional game a modern look.

I really liked the Bonus Game puzzles. If I do end up spending money on this game, it will probably be to unlock the rest of the puzzle challenges. It is fun to try to plan out how to checkmate an opponent in only two moves when the game pieces are already set in play.

While I like that the came is cross-platform, I don’t like that it doesn’t have Game Center support. I would rather be connected with my friends through the iOS ecosystem only, than have to go through a multistep process where my friends have to sign up for a new account in order to play against me.

Pure Chess is free to download. From my review, you can see that it could cost as much as 12 bucks to unlock all of the features. However, you can pick and choose which features you want to unlock, or not unlock any at all, and still have a fun and entertaining game of chess on your device. If you are not very good at chess, you probably won’t need to spend any money, since the beginner features are all free. If you are an avid chess player, you may end up spending a couple of dollars to unlock more advanced AI opponents.

Since the game is free to download, you are not losing out by downloading it. If you like to play chess and don’t already have an app that you think is the best for chess, try this one out. If you like the way it is set up, you can spend a couple of bucks on the additional features. This app is available for the iPhone and iPad. Download it in the App Store today.

Live Chess is an app that also features 3-D graphics and online multiplayer connectivity. Chess with Friends lets you play the game with others online through Facebook.