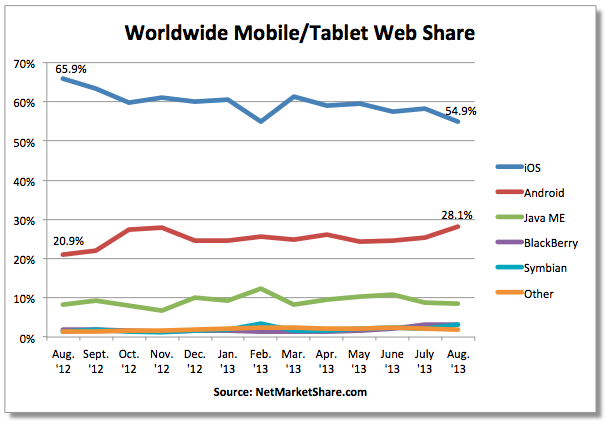 New data from web analytics firm NetApplicatons shows a significant decline in Apple’s share of the mobile web, with iOS devices falling to 54.9 percent in August, a 16.7 percent drop from the 65.9 percent reported during the same month in 2012. While still less than a third of the web usage, Android experienced an increase, rising eleven percent to 28.1 percent from 21 percent in 2012…

According to the author:

It will be curious to see if Cook cites the Web analytics firm’s stats at Apple’s next event, because according to NetApplications’ latest report, August was a particularly bad month for iOS.

Apple is expected to unveil new products next Tuesday, including a much-rumored iPhone 5S upgrade and potentially a brand new budget-minded iPhone 5C.

A new iPad is also expected to be introduced soon, probably in October.

While the new devices likely will breath new life into demand for iOS devices, a return to Apple owning nearly three-quarters of online usage may take longer, according to the Fortune writer.

It’s unclear whether a one-month drop in web usage signals any longterm trend. After the September launch of new iPhones and renewed interest in Apple, we are likely to see a rebound in iOS web usage.

The belief still holds that a greater percentage of iOS users are online, either with apps or browsers, than Android owners who largely use their smartphones for rather limited dumb phone purposes, although it’s possible Android’s increase in web usage share is the result of the mobile Chrome browser now being included in analytics data.