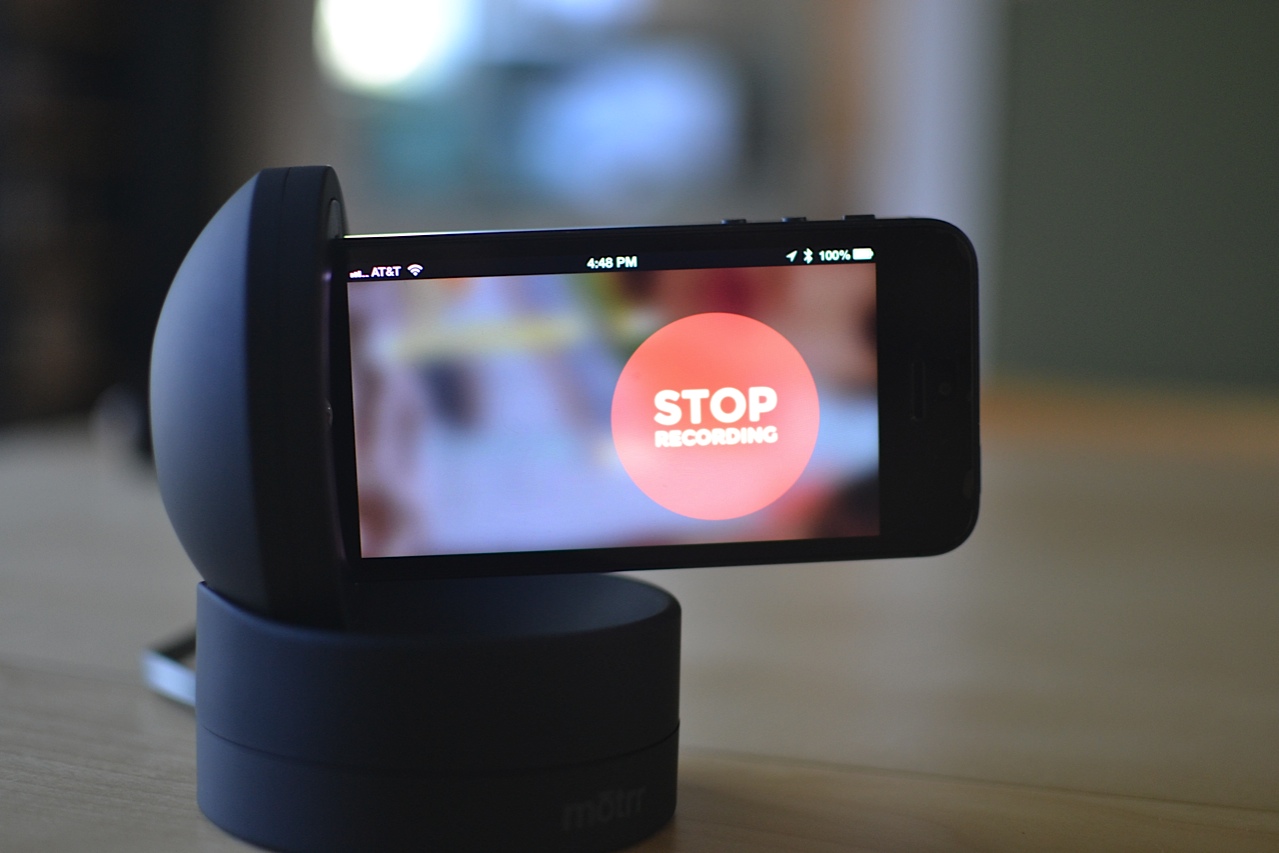 A couple of weeks ago, I wrote a review of the photography app Sphere (formerly TourWrist). After reading the review, the app’s developer sent me Motrr’s new photography mount, Galileo, which is a perfect accessory to the 360-photography app.

Motrr’s new spherical recording device made the front pages when its Kickstarter campaign went supernova and made seven times its original goal. The Galileo is currently shipping to Kickstarter pledgers and Motrr is taking preorders for the device for a mid-October launch.

In addition to being a spherical recording device that fits perfectly with Sphere, Motrr’s Galileo is an iOS-controlled remote motion stand for the iPhone and iPod touch. The device features 360-degree spherical rotation capability and lets users take pictures or view streaming video using pan-and-tilt speeds of up to 200 degrees per second. Set up your iPhone with Galileo and use another iOS device to control it by swiping your finger on the screen to move the angle in any direction you like. This multipurpose stand lets you use your iPhone for video conferencing, baby monitoring, and more…

I am reviewing the matte black Bluetooth model with an iPhone 5. I am using a beta version of the Sphere app to demonstrate the Galileo’s abilities.

The Galileo is very lightweight and can easily be held in the palm of my hand, which is not a particularly large hand. It is made from a sturdy plastic and coated with a rubberized material so that it feels soft to the touch.

It has three sections. The bottom houses the rechargeable battery, the micro USB port, and tripod mount connector. The middle section twists separately from the bottom section and is used to connect the Bluetooth device. You twist the base in order to activate Bluetooth connectivity.

The upper section is where the iPhone is mounted. There is a fitted grove where you place your iPhone and a half-sphere is carved out in front so that you can easily access your home button. The upper section is also the part of the mount that swivels around. You can manually rotate 360 degrees while in portrait and landscape mode or let the app you are using do the work remotely.

The device is charged using the included micro USB charger. Plug the cable into the Galileo and then plug the USB port into a wall charger. Once fully charged, you can remove the cable until you need it again. 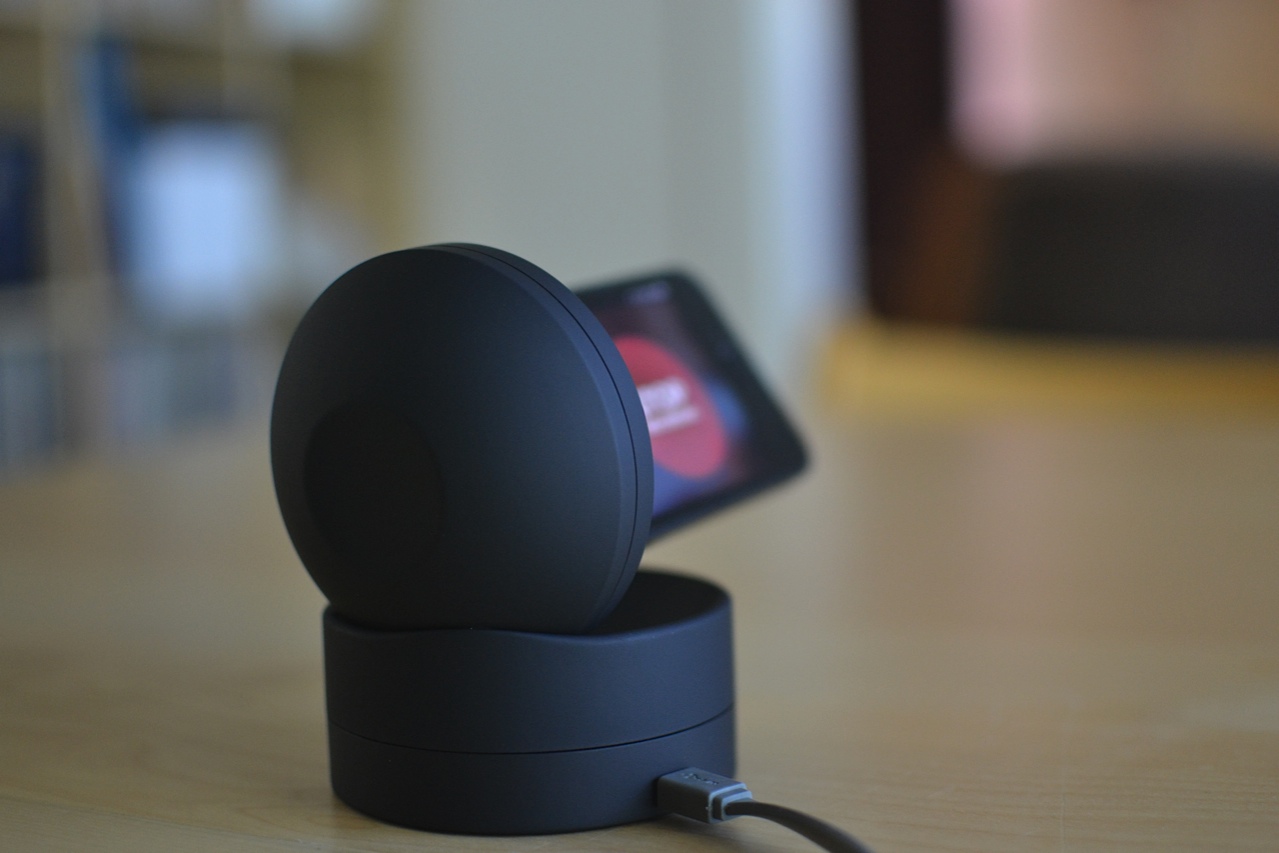 I cannot speak for all compatible apps, but setup with Sphere was unbelievably simple. Frankly I was intimidated to try out such a complex device. I’ve never used a spherical recording device before and worried that I’d have to do a lot of setting up and preparing for the process.

All I had to do was take the device out of the box, set it on my dining room table and plug it in. Then, I set my iPhone on the Galileo and opened the beta version of Sphere. I selected “Galileo” from the menu and an image appeared on screen telling me to twist the device to connect it to my iPhone.

I twisted. Then, a big old “Start” button appeared with a slider next to it for switching between tabletop and tripod positioning. I hit the start button and walked out of the room. After about 30 seconds, I came back and saw that my Sphere was developing so that I could upload it to the community page.

That’s it. Done. I made a 360 viewable Sphere. I didn’t really have to do anything.

The Galileo can be attached to a traditional tripod mount with the connector port. It  just so happens that I have a traditional tripod mount, so I set it up in my office. The tripod increases the image capture view. Basically, it gives a wider scope of coverage. There is a tripod setting in Sphere that adjusts the stitching technique for the different angle. If you are going to mount your Galileo on a tripod while using Sphere, be sure to toggle the “Surface” slider to “Tripod.”

Galileo is also compatible with a number of camera and photography apps, such as Motrr LIVE, which lets you make video calls and turn your device into a remote control video camera. You know, for those little ones who can’t sit still. There is also a remote monitoring system called AirBeam that lets you view real-time audio and video streaming that is captured on your iPhone and a variety of apps for filmmaking. You can visit the company’s website for more information on apps that are already compatible with Sphere and those that are coming soon.

The Galileo is sturdy and classic looking, while being very lightweight and easy to transport. You could easily fit it into a jacket pocket, purse, or even a back pocket if your pants are loose enough. It is slightly bigger than a pack of cigarettes and probably weighs about the same.

It is designed so that you can also use it as a stand for your iPhone. The spherical “scoop” that is carved out of the base where the iPhone is mounted makes it possible for you to easily access the Home button and you can watch movies, read books, or listen to music while mounted in the Galileo. In fact, the scoop doubles as a sound redirector so that you can hear audio better than through the native speakers alone.

The available apps make Galileo a virtual remote monitoring system. You can watch streaming images, make video calls, and record movie clips while remotely controlling the angle of your iPhone.

It is difficult for me to scrutinize this device since I’ve never used a 360 spherical recording device before and have nothing to compare it to. I can only judge the Galileo based on my own impression and experience with it.

I have to say that I didn’t find anything wrong with this iPhone mount. It fits perfectly, is lightweight and easy to use. When used in conjunction with the Sphere app, it is absolutely amazing. The Bluetooth connectivity was flawless and it performed exactly the way I expected it to.

Motrr’s Galileo is available for $149.99, which is a reasonable price for a device that, not only mounts your iPhone with a wide variety of viewing positions, but can also be used as a remote monitoring device, a remote camera controller, and a device to help you create 360 panoramic images. If you are interested in a mount for your iPhone that is capable of such things, this device works perfectly. You can preorder the Galileo from the company’s website today (30-pin version available on Amazon for $130). The device is expected to ship in mid-October.