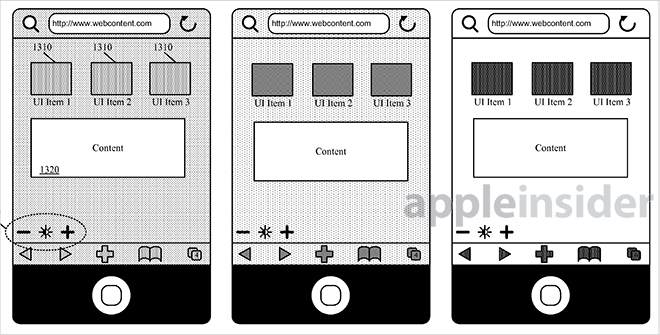 Although Apple already permits owners of Mac, iPhone, iPod and iPad devices to adjust the user interface in a global way, a newly-published patent application describes how certain elements of the UI could be adapted. The application details a method to filter certain areas of the user interface, permitting users to adjust certain areas of the interface while leaving other locations untouched.

Along with giving us more control of an application’s user interface, the adjustments outlined in the application titled ‘User Interface Contrast Filter’ could help improve such things as battery life…

The key, according to AppleInsider, is the patent’s focus on color saturation.

By comparing saturated and non-saturated pixels, the patent could determine which UI elements can change the most when the display is adjusted. A simpler strategy also outlined is to divide an iDevice’s interface into masks.

For instance, the white portion of a mask would indicate the controls can be adjusted while the black portion would mark areas that cannot be altered by the user, such as content areas in an application.

The patent filing also details how various display elements, such as pixels, calibration, luminance, saturation and gray values could be tweaked on a pixel-by-pixel basis.

Due to its system-wide nature, the invention could be implemented by developers without too much work and could be especially useful for Apple’s iOS in the Car initiative and to color-blind people.