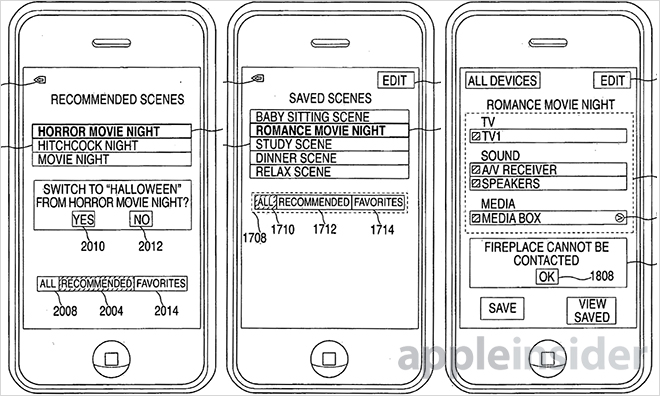 The introduction of numerous media devices – from your television to DVD player and stereo – coupled with the growth of smart homes would seem to cry out for Apple-like simplification. It just so happens, there is a patent for that. Apple has patented a way to control your home media collection right from your iPhone.

The patent, filed a half-decade ago by the creator of the iTunes Remote app, uses “scenes” to adjust your home multimedia to fit settings like “Romantic Movie Night”, “Dinner,” or simply “Relax.”…

Titled “Systems and methods for saving and restoring scenes in a multimedia system,” the Apple patent published Tuesday by the U.S. Patent and Trademark Office suggests turning your iPhone or other smartphone into an intelligent remote.

“What Apple proposes is a software driven intelligent remote that can connect to multiple A/V components, as well as ‘smart home’ devices like lights and window shades, via Wi-Fi, Bluetooth or other wireless protocols,” AppleInsider writes.

Although current universale remotes also use the “scene” metaphor to control various hardware, the devices are usually limited and require the user to complete complex setup.

The proposed remote injects some intelligence into the process, polling various devices to obtain their settings and configuration.

Along with knowing what volume your amplifier is set to, the proposed system could also learn what DVD is loaded, what music is playing and potentially even what channels your television receives.

More examples of intelligence are seen in the remote’s ability to learn how and when devices are used. For example, for the “Romantic Movie Night,” from talking with your multimedia system, the remote might learn you like dim lights, lowered curtains and your favorite Drew Barrymore flick.

Other examples might be “Guy’s Night,” a scene that automatically tunes in the NFL channel and starts the disco ball spinning.

The only stumbling block to such customization is that much of the needed hardware doesn’t yet exist.