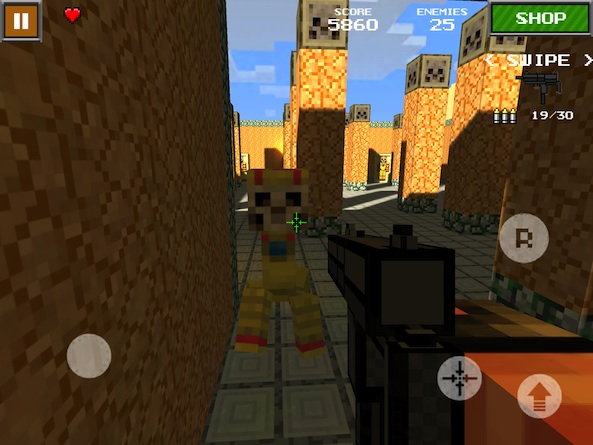 PixelGun 3D has been hovering around the top spot for paid apps for a while now. Maybe it’s because it comes with a custom skin maker for Minecraft. Maybe because it has that retro pixel look that old school gamers go gaga over.

It could also be because the game, now called Pixel Gun 3D, is actually a good first-person shooter game that fans of the genre will enjoy…

Right out of the gate, this game reminds me of classic first-person shooter (FPS) games like Wolfenstein 3D and Doom. Players enter the battlefield with nothing but a pixelated handgun and must shoot their way out of a tight spot. The main difference is that this game is intentionally blocky instead of being the victim of the decade.

Zombies, mummies, and skeletons are all made from the same type of boxy body as those in the popular building game Minecraft. In fact, one of the game’s features is that you can create custom skins that you can upload to your Minecraft Mojang account.

The entire world is pixel heavy. So much so that you can hardly see the details of some monsters when they are up close. Just like it is in Doom. Very nostalgic.

In the Skin Maker section, you can create a new Minecraft skin from scratch or start with a preset character and customize it. Presets can be uploaded to your Minecraft account through Mojang. 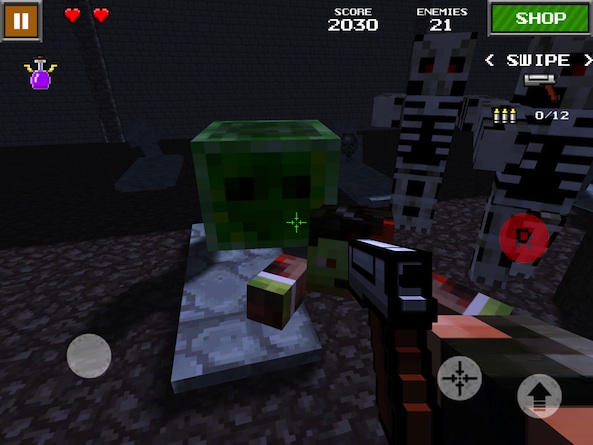 Players start on a primer level that looks more like a zombie shooting gallery than an FPS. You will be able to practice your shooting technique and get a few tips on how to jump, collect guns and weapons, and what to do when you’ve cleared a level.

Then, you’ll be transported to the graveyard where you must defend yourself against a horde of undead monsters. Zombies, skeletons, and ferocious bushes (at least, I think they are bushes) will chase you around until you gun them down. Don’t stay in one spot. There are different guns and additional ammo hiding in different places. They will appear randomly and in spots you thought you had already checked, so always be on the move. Different guns have different abilities. For example, your basic handgun takes four shots to kill a zombie while the six-shooter will take them down in two. There is also a machine gun, a sawed-off shotgun, and more. You can purchase special weapons in the game’s store, like the iconic miner’s pick axe from Minecraft or a crystal sword (possibly a nod to Adventure Time?).

Survival mode is extremely challenging and you only get one free re-spawn elixir. That means that after you die, you have to start over at the very beginning. That one re-spawn elixir will make you happy, but only until you get your head gnawed off by a bunch of cursed mummies. Once you’ve run out of elixir, you’ll have to start at the beginning again, no matter how far you’ve gotten. It is both exciting and rage inducing to get to the next level, only to have to start over thanks to a particularly hungry pack of birds.

In Multiplayer mode, you can either create a game or join one that is about to begin. You can create your own game by selecting the map, choosing the number of players up to 10, and deciding how many kills wins the game.

Once you enter the arena, it is kill or be killed. The first person to make it to the specified number of kills wins the game. 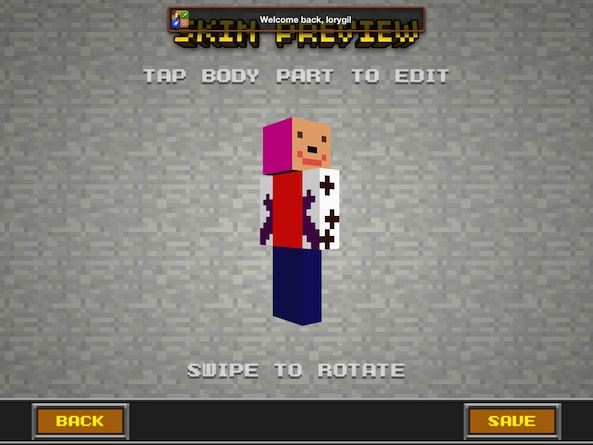 I was pleasantly surprised at how fun this game is. On the surface, it doesn’t seem like much. It almost feels like a work in progress, which I think it is. The levels are very challenging and loads of fun. It is obvious that the developers of this game have a deep love of the FPS genre. They know what gamers like and give it to them in spades.

For some reason, the game saved 13 images to my iPad’s photo library. I’m not sure why that needed to happen. I can only imagine it has something to do with sending the skins to your Minecraft account. However, I would have rather been given the choice of whether I wanted to save the skins to my photo library or not.

You can download Pixel Gun 3D for $0.99 and it is worth every penny. It features a rich and challenging Survival mode with 10 unbelievably difficult levels. Plus, you can fight against your friends (or enemies) for hours in Multiplayer-vs-player mode.

Fans of old school first person shooters will really get a kick out of this game. It is fun, exciting, and tough to get through. As a whole, it still feels like an unpolished gem. However, as the game increases in popularity, it is clear that the developers are spending more and more time creating the ultimate pixelated FPS. This game is available for the iPhone, iPad, and iPod touch. Download it in the App Store today.

In addition to games like Doom and Wolfenstein 3D, N.O.V.A. 3 is an epic FPS for the modern age. Of course, there are intentional similarities to Minecraft.

Do you like to play FPS games, or do they just make you feel nauseous? I still remember the first time I played Doom. I thought I was going to be sick. Maybe I shouldn’t have played it for three hours straight.