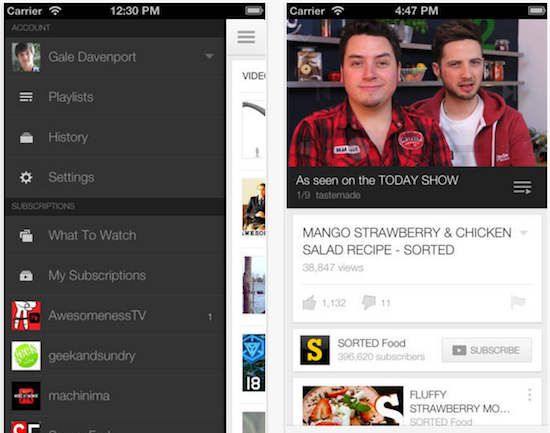 Yesterday, Google announced that it was bringing a new version of its YouTube app to Android, but it didn’t say when it would be reaching iOS. Well it looks like the answer is today. The search giant just posted a big update for its standalone iOS YouTube app.

The update, which brings the app to version 2.0, brings about a number of improvements, including a new ‘picture-in-picture’ feature, which lets you watch a video in the bottom half of your device’s screen while you continue to explore content on the site…

The Cast button on YouTube already lets you send YouTube videos from your phone or tablet to your connected TV, like onChromecast, Google TV, PlayStation 3 and other TVs. To make it easier to choose what to watch next, you’ll see a preview screen when your devices are connected and you select a video, with options to play the video to queue it up to watch next.”

And here’s a demo of the new features:

Also new in the YouTube app is the ability to search and browse channels for playlists—something you couldn’t do on mobile before. Now you can set back and watch collections of back-to-back videos, such as entire seasons of YouTube series like Epic Rap Battles.

Finally, to round out the update, the UI in the app has been refreshed with a “cleaner, simpler look that you’ll see in other apps from Google.” The new YouTube app will be available shortly from the App Store, for free.