Earlier this week, news broke that Apple had purchased a small video discovery startup called Matcha. At one time, the service helped users find interesting TV shows and Movies based on their preferences, but it mysteriously went offline back in May.

While we found out on Tuesday why it disappeared, that’s about all we knew about the acquisition. But a report from TechCrunch today shines some new light on the deal, citing sources that say Apple was after Matcha’s recommendation algorithms…

TechCrunch’s Darrell Etherington has the scoop:

“Matcha was acquired after testing numerous approaches to generating recommendations, right at the point where it had refined its algorithm such that it saw an explosion in user growth, according to our source. The app did definitely do well on the App Store charts, and was ranked among the top 15 apps in the Entertainment category before it was shut down.

It was Matcha’s user acquisition and user engagement strategy that Apple was interested in, according to one of our sources, since the acquisition happened just after Matcha had completed a round of vigorous A/B testing and had “found the answer” to rapid user growth and time spent in app. Matcha’s pairing algorithms that drove the right content to the right users simply worked best of any other apps competing in that space, the source affirms.”

Etherington goes on to say that while it’s tempting to draw the conclusion that this is tied directly to Apple TV, the acquisition is more likely along the lines of Apple’s previous pick-up of app recommendation service Chomp. Except, obviously, this is for video. 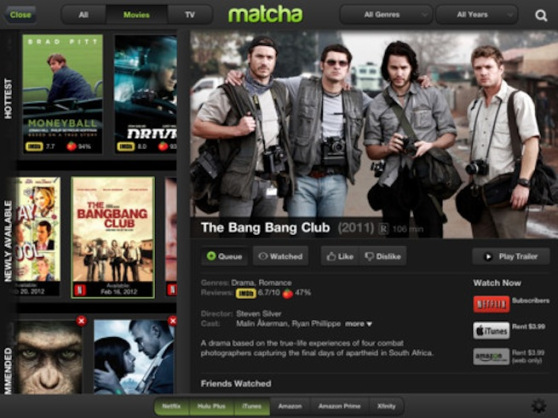 He also adds that the purchase price was not the $1.5 million previously reported. No, according to “two very reliable sources close to the matter,” Apple paid 8 figures for the startup—the deal is believed to be worth somewhere between $10 and $15 million.

Before shutting down in May, Matcha ran a popular recommendation service that reached a top 15 spot in the App Store’s Entertainment category, aggregating content from a number of streaming services including Netflix, iTunes, Hulu and Amazon Prime.