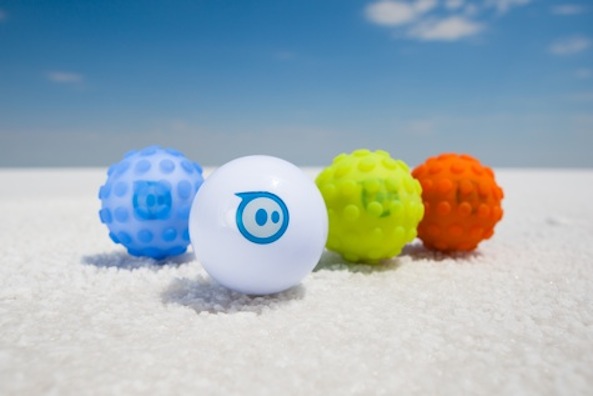 The Sphero ball was one of the first iPhone-controlled accessories to hit the market back in 2010, and it has long been a favorite of enthusiasts. The baseball-sized rolling ball can be remotely controlled via an iOS or Android app.

Today, Orbotix announced the successor to the Sphero ball: Sphero 2.0. The upgraded accessory is more than twice as fast as its predecessor—capable of rolling at 7 FPS—and three times as bright, with more LEDs and colors…

On the outside, the ball looks the same as version 1, save for a new removable, bumpy, rubber shell that allows the already waterproof Sphero to handle new terrain like mud and ice. And of course the shells come in various colors.

On the inside, things are a little bit different. Sphero 2.0 features more and brighter LED lights, as well as a custom Bluetooth chip that the company says will speed up communication between the ball and the device controlling it.

If you’re interested, Sphero 2 pre-orders begin today for $130, but they’ll eventually be sold at Apple Stores. The device comes with two ramps, optional ‘Nubby’ covers ($15), and there are 25+ apps available that interact with the ball.