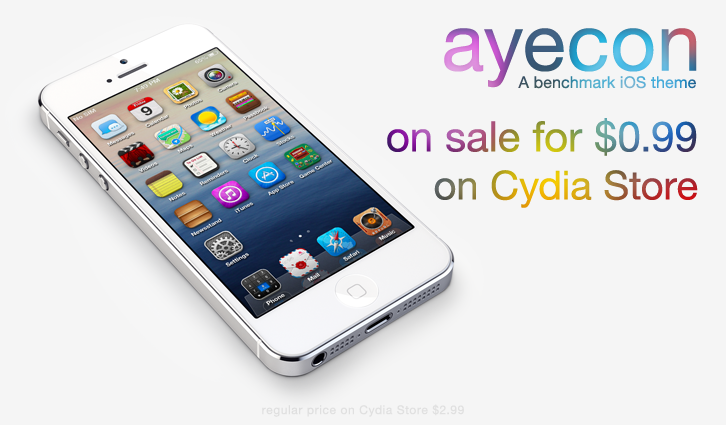 One of the most popular, and arguably one of the best jailbreak themes of all time is now on sale. For the first time since its inception, ayecon, the groundbreaking Retina enabled theme for the iPhone is available for just $0.99.

It’s hard to believe, but it’s been over a year since ayecon was initially released on Cydia. I think it’s safe to say that the theme has aged well, and adequately stands the test of time.

If you’re one of the few jailbroken iPhone owners that has yet to purchase ayecon, then you can do so now for just $0.99 on Cydia. This sale, according to its designer, Surenix, starts tonight, and he doesn’t have a date yet set for the sale to end.

If you’re at all into themes, I don’t imagine the decision of whether to buy ayecon or not being a very tough one. We spoke very highly of the theme in our initial review, and we feel that more than a year later, the words uttered in that review still ring true.

If you’ve yet to purchase ayecon, is a $2 discount enough to make you consider a buy? Let us know what you think in the comment section below.