In the horserace between Apple and Samsung (which will unveil a next-gen Note phablet on September 4), the iPad remains the top-selling tablet, although growth fell 14.1 percent on shipments of 14.6 million iPads, down from 19.5 million during the first quarter of 2013, IDC announced Monday. No. 2 Samsung also saw tablet shipments slow to 8.1 million units, down from 8.6 million devices during the previous quarter, though the South Korean vendor saw a 277 percent annual growth in tablet shipments…

“A new iPad launch always piques consumer interest in the tablet category and traditionally that has helped both Apple and its competitors,” said Tom Mainelli, tablets research director at IDC.

The slowdown for all tablet makers is expected to last into the third quarter, followed by fourth-quarter tablets introduced by Apple, Amazon and others. Those products should “drive impressive growth” in the market, forecasts Mainelli.

While shifting a new iPad launch from the second quarter to the fourth quarter, Apple will be in a better position to compete during the all-important holiday shopping period. 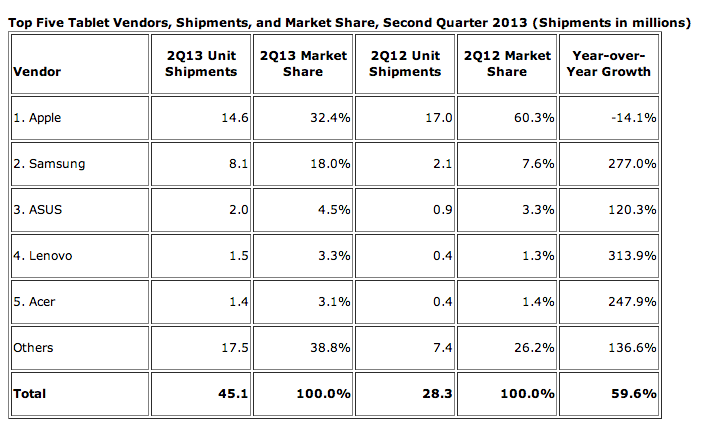 In terms of tablet operating system, Android and iOS remain in first and second position. Google’s mobile operating system had 62.6 percent of the tablet OS market during the second quarter, up from 38 percent for the same period in 2012. Apple has 32.5 percent of the market, down from 60.3 percent a year ago, according to the researcher.

Although Android is far and away more successful than Windows 8, Microsoft is seeing some impressive gains. The Windows OS saw a year-over-year growth of 527 percent, shipping 1.8 million tablets, up from 0.3 million a year ago.

The hapless BlackBerry OS is barely alive, its growth dropping by more than 32 percent for the year. The Canadian company shipped 0.1 million copies of the BlackBerry OS during the second quarter, down from 0.2 million during the same period in 2012.